A fire has destroyed all cars in a 1,600 capacity multi-storey car park next to the Echo Arena in Liverpool.

The Liverpool International Horse Show was cancelled as firefighters tackled the huge blaze next to the venue on Liverpool’s waterfront.

Anyone affected by fire at Liverpool Echo Arena and unable to get home or need shelter, Liverpool CC has a Reception Centre at Lifestyles, Park Road, Steble Street, L8 6QH.

All vehicles parked in the car park have been destroyed and owners to contact their insurance companies.

Merseyside Police said: “Initial investigations indicate that an accidental fire within a vehicle caused other cars to ignite.

“We believe that all vehicles parked in the car park have been destroyed and advise owners to contact their insurance companies.”

No-one has been seriously injured, the force said.

According to Liverpool’s mayor Joe Anderson the blaze started in a Land Rover on the third level of the car park. 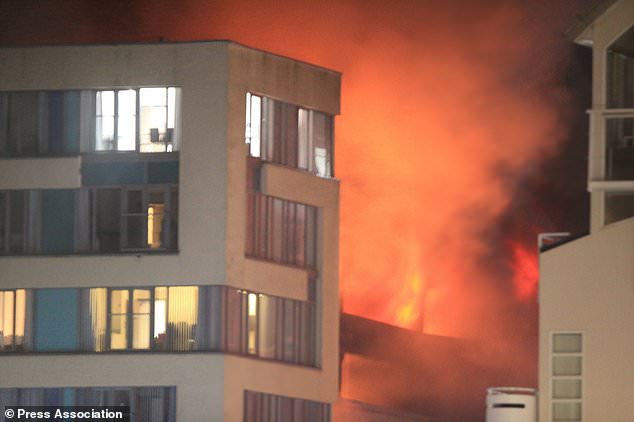 Horses which had been on the first level were moved to the arena, he added.

Firefighters are still trying the contain the blaze, police said.

Crews were first called at 4.42pm and were on scene eight minutes later. 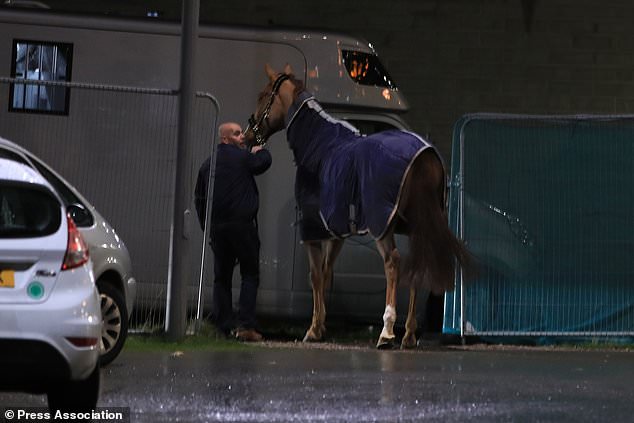 The area was evacuated along with some apartments nearby due to smoke billowing from the blaze.

Police advised members of the public to stay away from the area and traffic restrictions are currently in place.

A spokeswoman for the Echo Arena said: “We regret to announce that the Liverpool International Horse Show has been cancelled tonight due to a serious fire in the multi-storey car park on site. 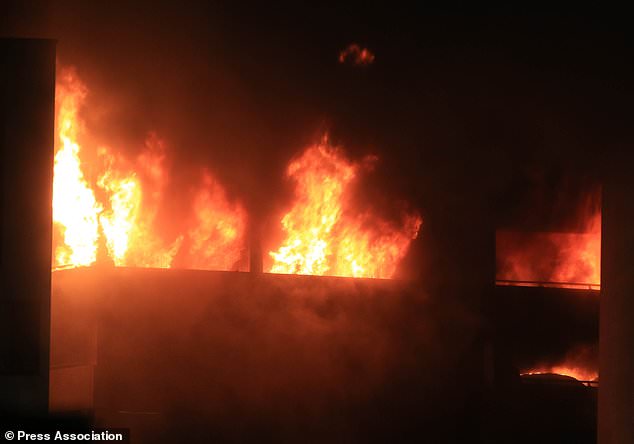 “All people and horses are safe and secure.”

The four-day event was due to finish with Sunday evening’s show where around 4,000 people were expected.

There were periodic explosions and flames shooting up the outside of the building as the cars burned.

The arena car park where the blaze began can accommodate 1,600 vehicles.

MFRS continue to fight a fire at the Kings Dock multi-storey car park near to the Echo Arena. There are 12 fire engines and two aerial appliances at the scene. People are urged to avoid the area if possible due to traffic restrictions https://t.co/jQm48Uwllw

A reception centre has been set up nearby for people who are unable to get home.

Sue Wright, wife of former England footballer Mark, told the Mail Online that she witnessed the start of the blaze and said it was sparked by an engine fire in a Land Rover.

“It was an old car that exploded as we were leaving the building. We were in our minibus and one of the kids shouted, ‘there’s a fire!’”

She added: “We’ve lost everything because our car was right next to the car that exploded. My handbag was in it, our cards, cash, everything. We just grabbed the keys and ran.”

Mrs Wright said the cars were “just popping every couple of seconds”.