A worker at a Georgia fire department has been suspended without pay after allegedly ‘inappropriate’ comments about George Floyd protesters were seen to come from their Facebook account.

The worker, who is employed at Gainesville Fire Department, has not been identified and insisted from the start that they did not make the comments on their profile.

An investigation by authorities has since revealed that the employee’s spouse was responsible for the comment.

The pair were apparently not together at the time the post was made and the worker only found out about the nature of the posting after another another employee contacted the worker about it. 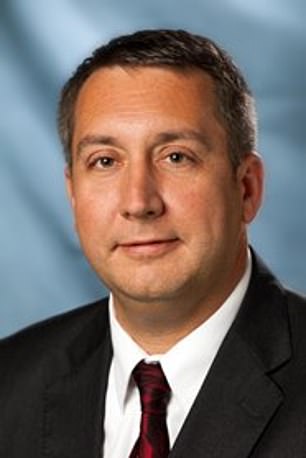 City Manager Bryan Lackey said the comment was ‘inappropriate, distasteful and baseless remark regarding the citizenship status of some demonstrators’

‘During our investigation, both the employee and his spouse both stated that the spouse had typed and posted the remarks on Facebook,’ Gainesville City Manager Bryan Lackey said to the AJC.

‘While this finding did lessen the impacts and involvement of the employee, we still proceeded with a disciplinary action as all employees are responsible for any posts or remarks made from a social media account associated with their name,’ he said.

Lackey called the comment ‘distasteful and baseless’ although the exact wording was not revealed.

The comment, which has since been deleted, was posted during a livestream of a protest into the death of Minneapolis man George Floyd who died in police custody after an officer knelt on his neck for almost nine minutes.

The comment is alleged to have referred to the citizenship of some of the people involved in the protests.

Fire officials were told of the offensive nature of the posting the following morning after a protest. 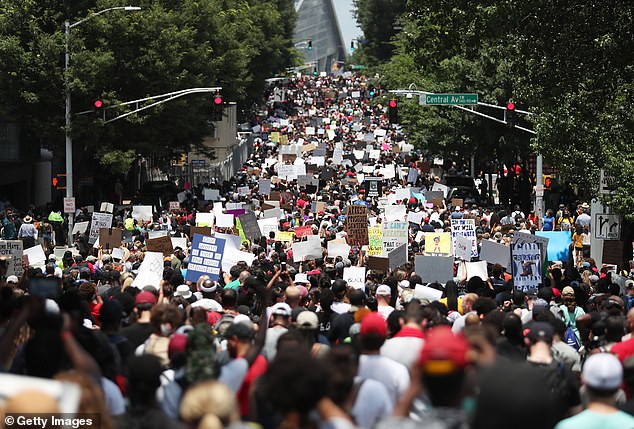 The comment was in relation to the protests following the death of George Floyd. Pictured, People march through the streets during a Juneteenth event Organized by the One Race Movement in Atlanta, Georgia

‘Saturday evening, the city of Gainesville served as the backdrop of an impassioned demonstration, which we understand remained peaceful for the most part,’ Lackey said in the statement.

‘The activities were streamed publicly via Facebook Live on a number of social media pages, enabling participation — including commentary — by those watching.

‘We want the public to know the comments of this one individual do not, in any way, shape or form, reflect the views or position of the Gainesville Fire Department, nor city of Gainesville government,’ Lackey said in a statement. ‘The city prides itself on being a melting pot, and has zero tolerance for comments such as these.’

The employee was suspended for a week without pay and advised not to share any social media accounts with other people, including his wife.