Over a thousand people have been forced to evacuate their homes as wildfires rage across 2,900 acres in the Florida Panhandle.

The fires tearing through Santa Rosa and Walton counties have scorched thousands of acres of woods, razed dozens of structures, including homes, and have so far forced some 1,600 people to evacuate from their neighborhoods.

Firefighters continued battling the erratic fire deep into the night Thursday. With only 35% of the fire contained, it could be days before it can be brought under control, officials said.

The foundations of a house are all that remains in the aftermath of the Five Mile Swamp Fire that is still burning near Milton, Florida, on Thursday 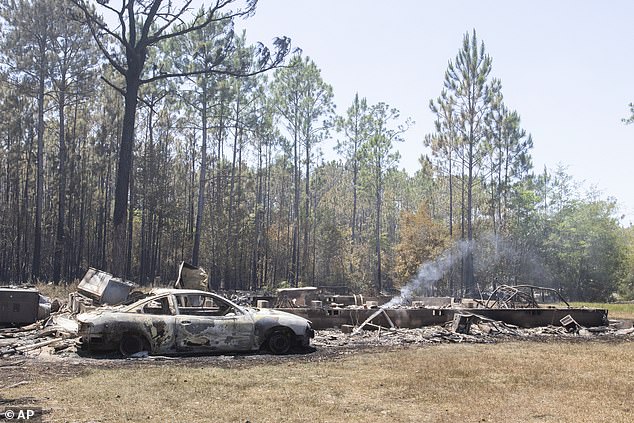 The charred foundations of a house and car are pictured near Milton on Thursday. Authorities say firefighters in the Florida Panhandle are battling wildfires that have forced some 1,600 people to evacuate from their homes 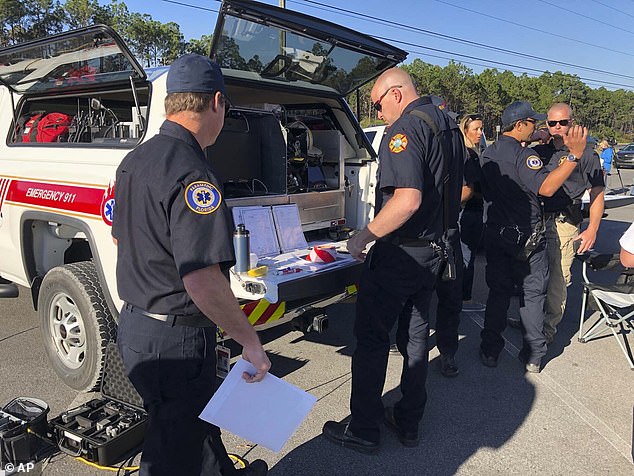 Firefighters and other first responders gather at a command post on U.S. Highway 98 in Walton County, Florida on Thursday morning

Officials said a few of those residents, in areas south of Interstate 10, have been allowed to return to their homes, although others have been told to stay away. There have been no reports of injuries or deaths.

Officials said 13 homes were destroyed so far in the fire dubbed the Five Mile Swamp Fire. Because of the coronavirus pandemic, some evacuees were sent to nearby hotels to avoid potential problems with crowding.

A stretch of Interstate 10, northern Florida’s main transportation artery, remained closed in both directions near Pensacola because of smoke.

Gov. Ron DeSantis met with emergency officials at a church parking lot in Milton for an hour Thursday before returning to the state capital of Tallahassee, located about 180 miles (290 kilometers) east.

The fire was feeding on stands of pines in forests strewn with dry needles.

Agriculture Commissioner Nikki Fried said in a news conference Thursday afternoon that fire officials are working around the clock to contain the wildfires. 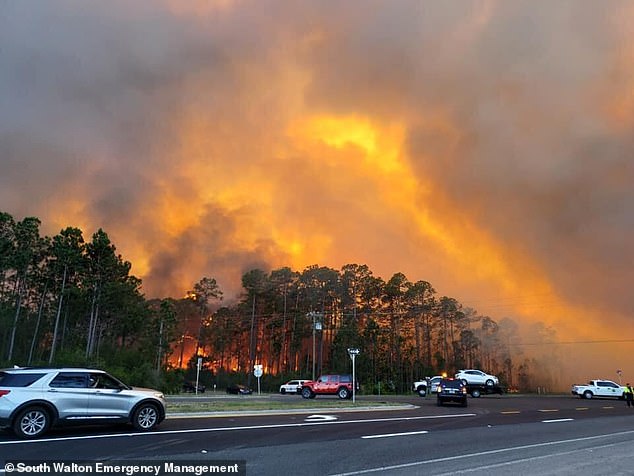 Wildfires raging in the Florida Panhandle have forced nearly 1,600 people to evacuate from their homes, authorities said. Smoke and flames are seen on Wednesday in Santa Rosa County 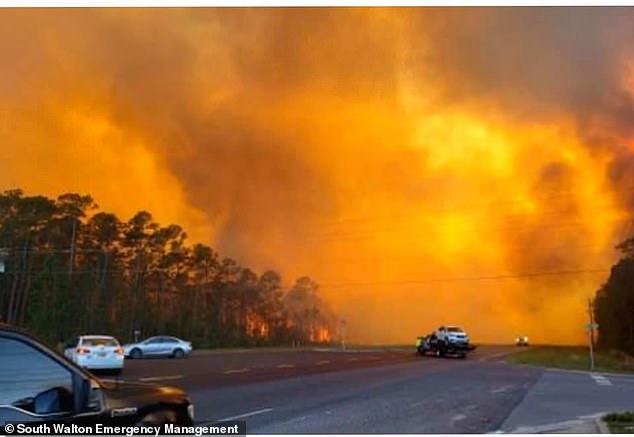 The more than 575-acre fire, dubbed the Mussett Bayou Wildfire, is seen raging in Walton County on Wednesday

‘The threat is far from over and there is no rain forecasted,’ Fried said. She asked residents to stay alert and ‘be ready for a wildfire impacting their neighborhood.’

Sgt. Rich Aloy, with the Santa Rosa County Sheriff’s Office, was patrolling Wednesday when he and other deputies rescued an older couple trapped by a burning power line. The possibly live wire blocked the two-lane, tree-lined road as smoke engulfed the area. Aloy said he and his deputies just happened upon the couple as they yelled for help.

The Santa Rosa County fire began Monday when a prescribed burn by a private contractor got out of control, Fried said. The conditions created a perfect storm for fire — low humidity and high winds. 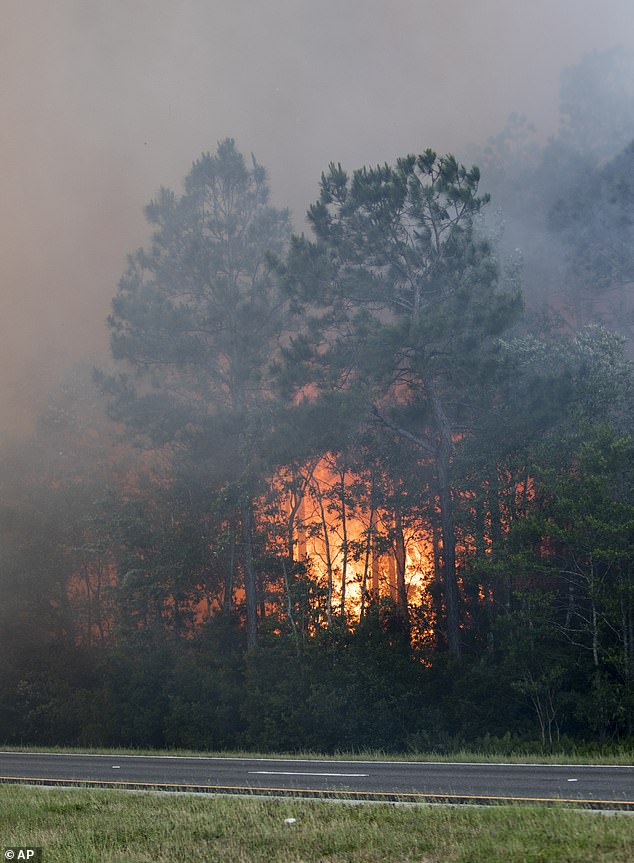 Flames consume trees along I-10 as the Five Mile Swamp Fire burns in Milton, Florida, on Wednesday 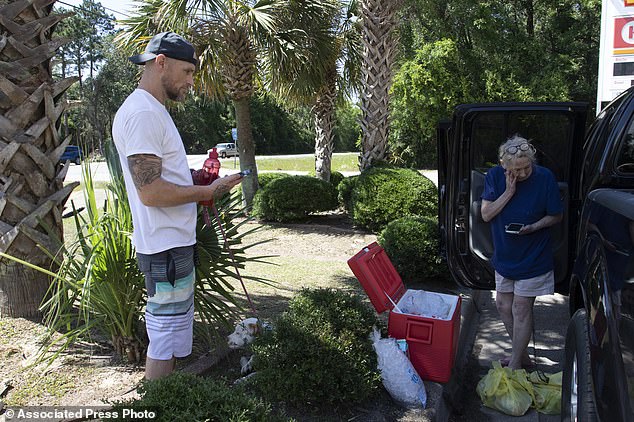 Mitchell Lamb (left) and his aunt, Peggy Smith-Lamb, evacuate as their home is threatened by a wildfire in Milton, Florida

‘In Florida, when we’re seeing the gusty winds, it’s hurricane season, not necessarily fire season. So the recipe was just right for this fire to make a huge run,’ said Ludie Bond, a spokeswoman for the Florida Forest Service.

On four different occasions, she said, the fire made a run for busy Interstate 10. Each time, it jumped the highway and pushed westward by gusts reaching 40 mph (64 kph).

Firefighters were expecting winds to shift and pick up on Friday, adding to the fire’s erratic behavior.

In a place accustomed to hurricanes, officials said many residents were ready to flee when given the word — although scores of people stayed behind, water hoses in hand, to stand against the fire. 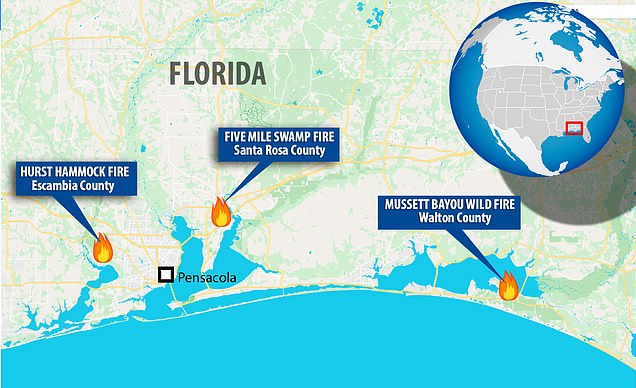 Crews from other areas of Florida, including Jacksonville, are assisting firefighters who’ve been working long hours since Monday.

In neighboring Walton County, a 575-acre (233-hectare) fire in Walton County prompted about 500 people to evacuate. Authorities there said multiple structures were lost in the fire, which was 65% contained Thursday morning. Fried said about 33 structures have been damaged so far.

‘It came close. Lots of trees burned. The home got singed. The barn behind the house was destroyed,’ he said. 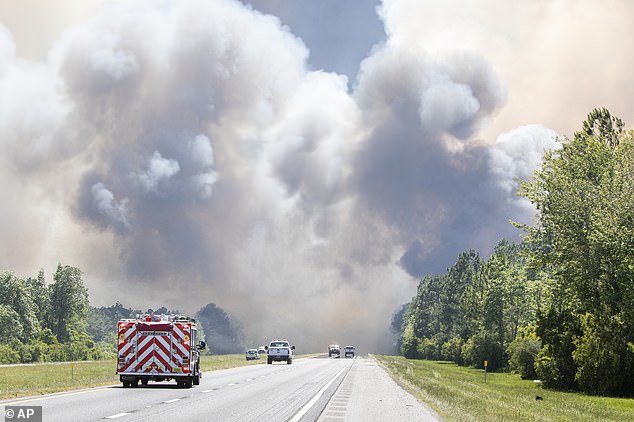 Emergency vehicles are seen stopped along a highway due to a large wildfire in Milton, Florida, on Wednesday 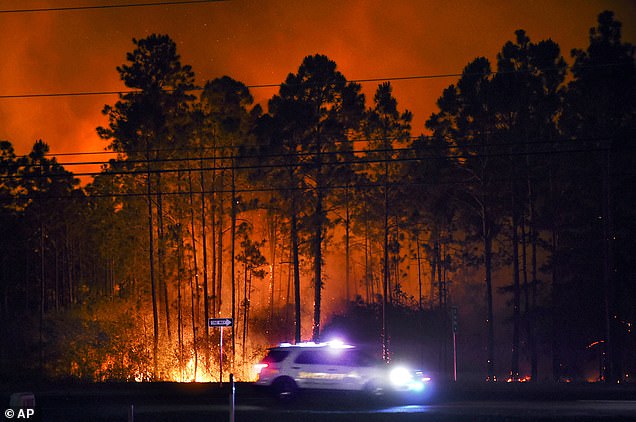 A sheriff’s vehicle travels along US Highway 98 in Walton County, Florida, past a hotspot of a raging wildfire on Wednesday night

At the time, his neighborhood was still under voluntary evacuation.

‘I knew there was a fire, but it still looked far away,’ he said. ‘But when it got dark, I didn’t know where the fire was. Suddenly it was there.’

When he knew danger was approaching, he ran back into the house to retrieve his cat, Bowser. He heard his landlord hollering for him to head to the pond. He put his cat, shoes and phone in an aluminum boat, and he and his landlord waded into neck-deep water.

‘I was afraid, but the panic set in afterward,’ he said. ‘I had never been through anything like this.’