Firefighters, RSPCA inspector and vet are all called in to save SEAGULL

Firefighters, RSPCA inspector and vet are all called in to save SEAGULL after it gets trapped in telegraph wire

A seagull left dangling above a housing estate after getting trapped in telegraph wire had to be rescued by the fire brigade.

The bird’s feet had been pierced by a fishing lure which then snagged on the cable leaving the poor creature suspended 30ft off the ground.

The RSPCA and firefighters rushed to the scene in Sunderland after a call from a shocked member of the public who had spotted the bird hanging upside down.

Rescuers used a throw line to pull the bird across to the nearest telegraph pole where an officer was waiting on a ladder to bring him down to safety.

Fortunately, the gull escaped with only a small wound to a foot and after being checked out by a vet, RSPCA inspector Kirsty Keogh-Laws took him to Pawz for Thought, an animal rescue charity in Sunderland, where he is recovering from his ordeal.

Kirsty said: ‘It was one of the most bizarre rescues I’ve seen.

‘The gull’s foot was impaled by the hook, and he’d managed to get the lure trapped in the telegraph wire. 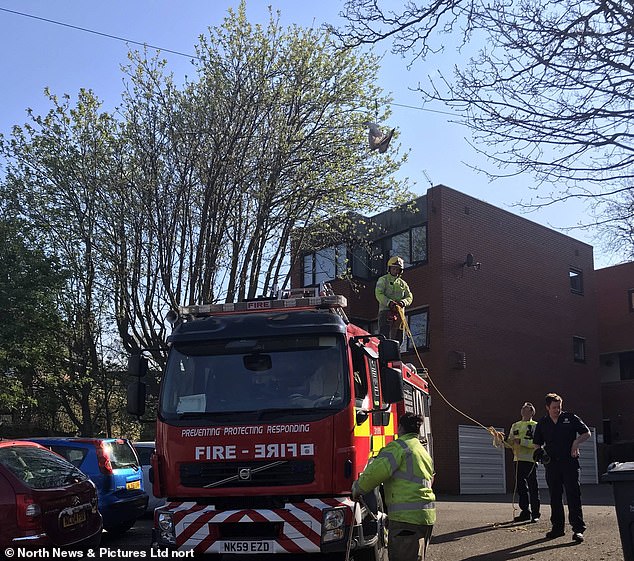 ‘When I first saw him, he was flapping around and obviously in pain. But fire officers from Sunderland Red Watch came out and they managed to pull the bird across to a pole using a throw line.

‘The vet wasn’t too concerned about the gull’s foot. There was nothing broken, and he had movement in both legs.

‘After he was given pain relief he was taken to the local rescue, and he will be released back into the wild after a period of recuperation.’