A dog was rescued from a sweltering hot car on Friday while his owner is believed to have been shopping in Waitrose.

The curly Cockapoo named Bertie, was left under the blazing sun on the top deck of a Waitrose multi-story car park in Saffron Walden, Essex.

Bertie was spotted in distress in the intense mid-day heat by a member of the public who informed the fire service.

Unable to find the owner firefighters were forced to break a window to release the baking dog, who had been left in the car parked in direct sunlight with no windows open.

Temperatures in Essex on Friday reached 72F (22C) with temperatures inside the car expected to have been much higher.

A post from Saffron Walden Fire Station said: ‘Today we rescued a Cockapoo Dog called Bertie from the top deck of Waitrose multi story park car in Saffron Walden by breaking a window to release him.

‘The dog was in distress due to the intense heat within a parked car in direct sunlight with no open windows.

‘Please always keep your pets welfare and safety in mind particularly during this hot spell. 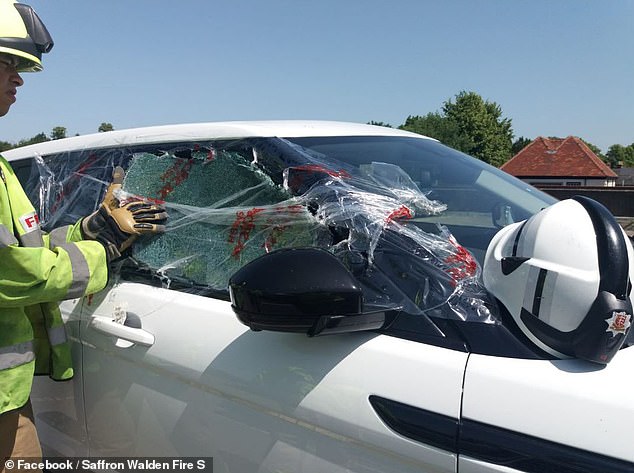 ‘With the recent high profile incident in Saffron Walden we are surprised the message is still not getting through when it comes to leaving children and pets in hot vehicles.

‘We thank Waitrose staff for their support with trying to help locate the owner and for providing much needed water for Bertie. The incident has been reported to Essex Police.’

The incident comes just a week after a toddler was dramatically rescued from another car park in the Saffron Walden area after being left alone for more than an hour in scorching temperatures.

The boy, thought to be around 18 months old, was freed after a passer-by heard him crying from inside the locked vehicle. 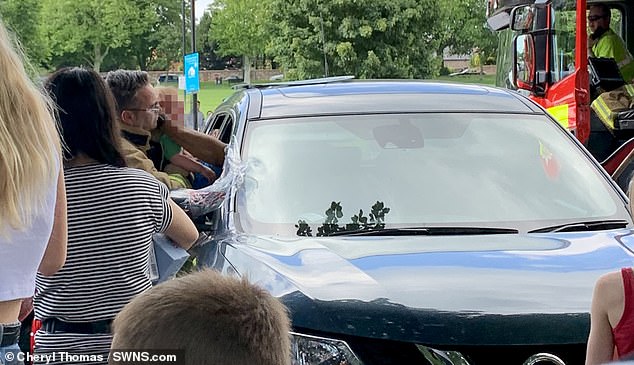 Fire crews finally released him by smashing a window and pulling him from the 4×4.

A ticket stub on the dashboard of the Nissan X-Trail suggested he’d been abandoned inside for more than an hour – as outside temperatures topped 25C.

Crowds gathered to watch the rescue operation after an announcement was made at a nearby family fun day, urging the boy’s parents to return to their car.

Witness Cheryl Thomas, 42, said: ‘It was unbelievable. We were all enjoying a day out and suddenly they announced this crying little boy had been left inside a hot car. 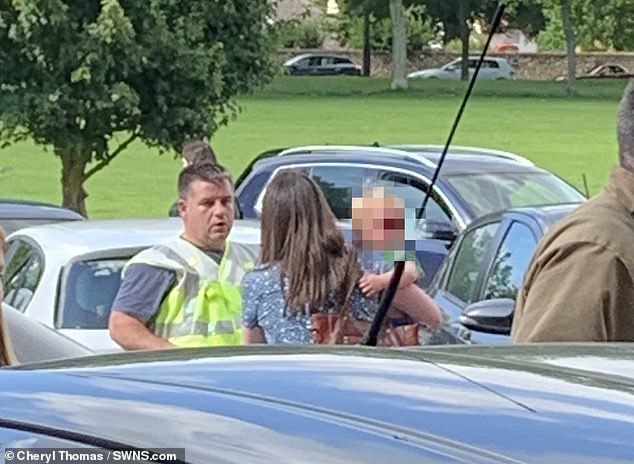 The child (pictured with a woman thought to be his mother) was rescued after more than an hour in the car parked in Saffron Walden, where outdoor temperatures reached 25C

‘We could see the car park from where we were and everyone looked over to see paramedics outside the car, frantically trying to get in. 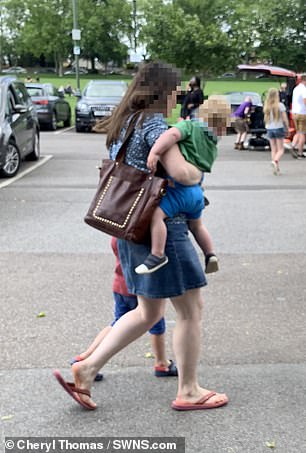 A woman, thought to be the mother, holds the child as she and another boy walk away from the scene

‘Everyone was looking round for a parent rushing over but no-one came. We couldn’t believe it when ten minutes later there was still no sign of anyone.

‘It was such a hot day, we actually got sunburn while we were out there so that poor little boy must have been in such distress.

‘It brings me to tears thinking about what he must have been going through.’

Firefighters swooped on the 17-plate vehicle and eventually freed the little boy shortly after 4.30pm after smashing the driver’s window.

He was crying and was visibly distressed as he was pulled from the car, which is when a woman – believed to be his mother – finally returned with another young boy.The toddler was passed to her and they were ushered into the back of a waiting ambulance for the boy to be assessed by a St John’s Ambulance crew.

Police officers later spent more than half an hour speaking to the woman in the back of the emergency vehicle. 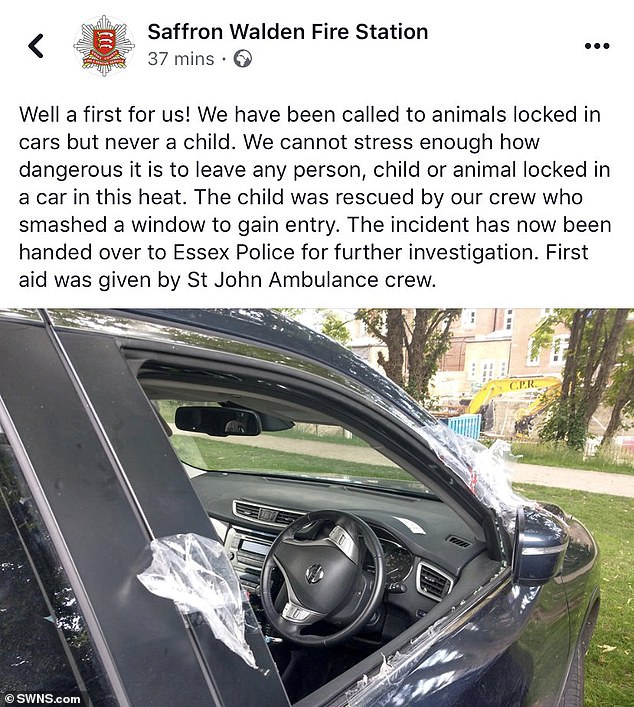 ‘A first for us!’: Saffron Walden fire service revealed their surprise at finding a child trapped in a locked car. Officers confirmed they had to smash a window to rescue the child and that the situation had been handed over to Essex police

Mum-of-two Cheryl, an accounts manager, said: ‘The firefighters did an amazing job getting him out, they worked so quickly.

‘Then this woman just appeared from nowhere. No-one realised she was the boy’s mum to begin with as she didn’t seem to show any emotion over what was happening.

‘She had another little boy with her, who was older and holding her hand. We just couldn’t understand why you would take one child out with you and leave one in the car for so long.