Fire authorities are on high alert as they brace for the potential loss of more homes and lives in the coming days.

Strong winds and sweltering temperatures will hamper firefighting efforts as more than 100 blazes continue to burn across New South Wales and Queensland for a third consecutive week.

A total fire ban will be in place in seven regions across NSW on Tuesday as firefighters battle a massive 6,000 kilometre firefront, the equivalent distance of a return Sydney-Perth trip.

The worst of the bushfires were in Queensland’s Toowoomba region on Monday, where there are unconfirmed reports homes were lost

In Queensland, conditions were expected to ease on Tuesday before deteriorating again from Wednesday onwards.

The fire danger rating on the Sunshine Coast, Brisbane, the Scenic Rim and Gold Coast in the state’s south-east has increased to very high, where authorities have also warned firefighting challenging this week.

Satellite images show smoke haze in the region from ongoing bushfires has made it to New Zealand.

The bushfire crisis has spread to South Australia, where a total fire ban has been declared across the entire state on Tuesday ahead of ‘catastrophic’ conditions and record temperatures forecast for Wednesday. 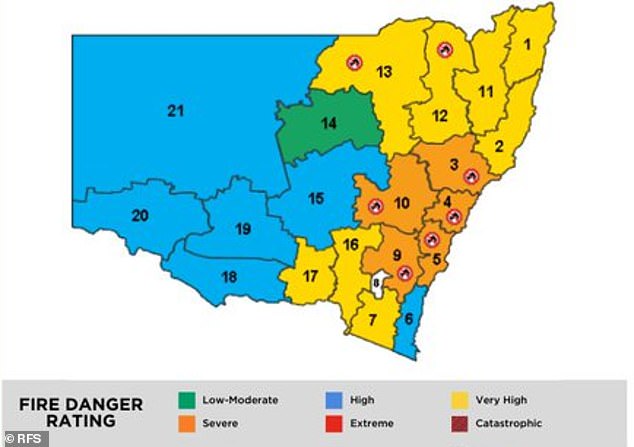 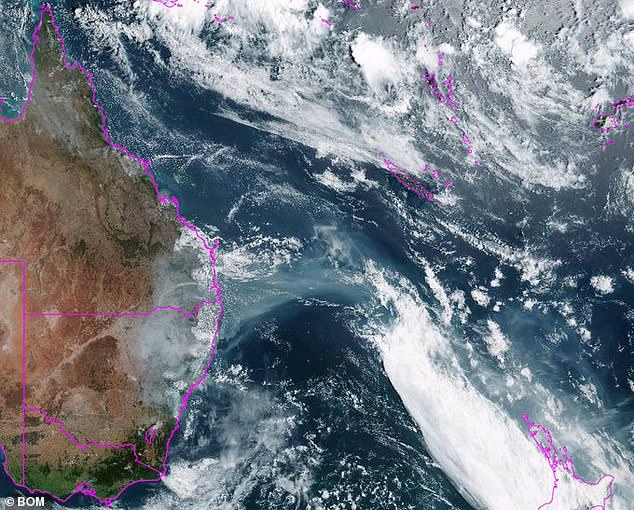 ‘Very hot and windy conditions across South Australia on Wednesday ahead of a cold front. Some locations are expected to break November temperature records,’ Bureau of Meteorology tweeted.

On Monday night, of the 51 bush or grass fires burning across NSW at advice alert level, more than half were yet to be contained.

‘More than 1300 firefighters continue work on these fires tonight, ahead of forecast hot, dry and windy conditions tomorrow (Tuesday), the RFS tweeted.

Six lives and more than 430 homes have been lost in the last fortnight, along with 1.6 million hectares of land – more land loss than the entire 1993-1994 season.

NSW RFS Deputy Commissioner Rob Rogers warned Tuesday and Thursday will be ‘tough days’ for firefighters, who  were ‘singularly focused’ on preventing further loss of life and property and warned people to stay alert.

‘Even though it’s not a catastrophic danger (this week) it’s still going to be bad fire days,’ Mr Rogers said. 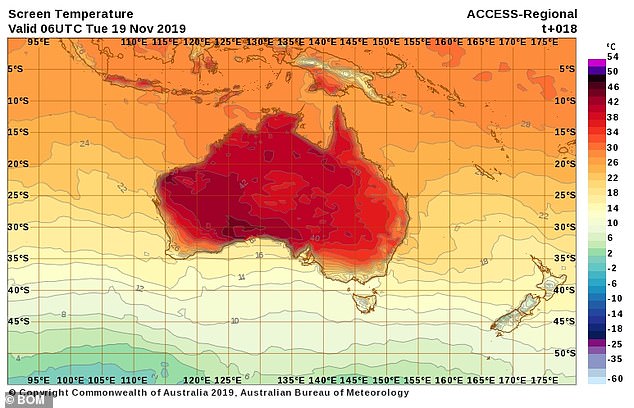 He urged anyone who had not yet been affected by bushfires to ‘please use this as a wake-up call’, warning them to take steps including cleaning out gutters and having a fire safety plan in place.

In Queensland, firefighters had a battle on their hands on Monday night fighting the Pechy blaze in the Toowoomba region, which reached emergency level earlier in the day.

Residents were forced to evacuate and there were unconfirmed reports five homes were lost in the Crows Nest area.

‘I have never seen a scenario like this – it’s a perfect storm,’ Toowoomba Region Mayor Paul Antonio told AAP. 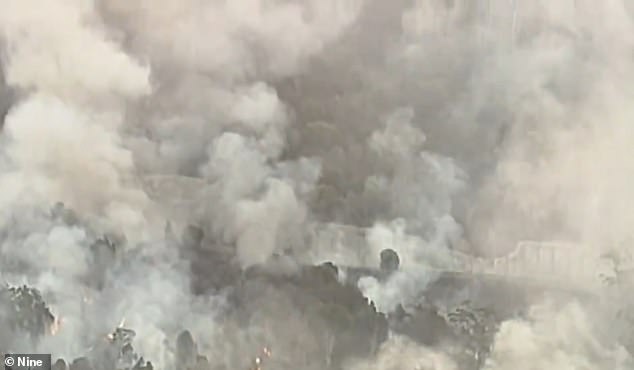 Three day forecast in your city