First Caribbean inhabitants wiped out by invaders from South America 1,000 years BEFORE Columbus

The Caribbean Islands was one of the last places in the Americas to be inhabited by humans almost 6,000 years ago – but the inhabitants were almost wiped out by invaders, according to DNA evidence.

After a massive genetic analysis of hundreds of individuals, researchers believe the region’s first inhabitants were wiped out by a second wave of colonists arriving from South America more than 3,000 years later.

This extermination, possibly caused by disease or warfare, would have happened a millennia before Columbus landed on the Bahamas in 1492, kicking off European involvement in the Western Hemisphere.

A new study in the journal Nature indicates humans came to the Caribbean in two waves. The original settlers, who came 6,000-7,000 years ago, seemed to have vanished after the second wave less than 3,000 years ago

The earliest Caribbean settlers are believed to have arrived in Cuba between 6,000 and 7,000 years ago.

It’s not entirely clear where they came from, or how, though they appear to be more closely related to Central and South Americans than indigenous North Americans.

Over thousands of years these foragers and stone tool-users known as Archaic Age people, continued east through the region.

They were followed by a second wave of migrants, pottery-making farmers known as the Ceramic Age people, who first arrived in Puerto Rico and moved westward. 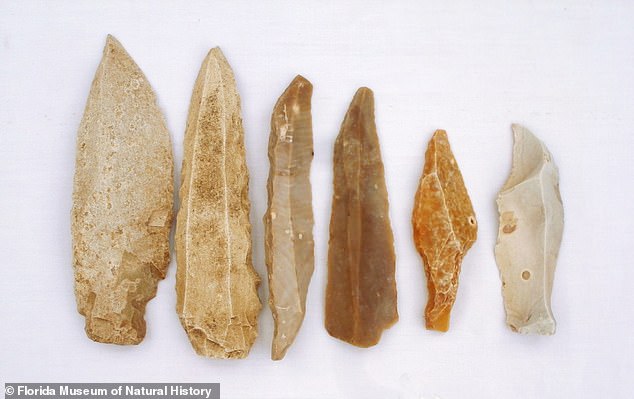 Stone blades made by Archaic Age inhabitants of the Caribbean. Except in western Cuba, Archaic Age DNA essentially vanished shortly after the Ceramic Age colonists arrived

But rather than integrate, the Ceramic Age group seem to have just replaced the Archaic Age people.

Intermingling between the two was rare, according to a new report in the journal Nature, with only three individuals showing mixed ancestry.

WHEN DID HUMANS START LIVING IN THE CARIBBEAN?

The Caribbean islands were one of the last parts of the Americas to be inhabited by humans. Archaeologists believe there were two main wave of migration, separated by thousands of years

6,000 YEARS AGO: The first inhabitants, known as the Archaic Age people, arrived in Cuba. They may have come from Central America and the northern tip of South America

One notable exception is in western Cuba, where Archaic culture seems to have persisted at least until Europeans arrived.

‘They apparently lived unmolested and with little mixing,’ William Keegan, an archaeologist at the Florida Museum of Natural History and a co-author of the Nature study, told National Geographic.

It’s not clear if the Ceramic Age people, related to modern-day Cubans, Dominicans and Puerto Ricans, slaughtered their progenitors, if they introduced a contagion they couldn’t fight off or if they merely outmaneuvered them for vital resources.

Human remains don’t last very long in the tropics, but an international team led by Harvard Medical School’s David Reich found a trove of genetic material in an usual place: The small but dense bone protecting the inner ear, which survived the ravages of time.

They were able to extract and analyze DNA from 174 individuals who lived in the Caribbean and Venezuela between 400 and 3,100 years ago, combining the data with DNA from 89 previously sequenced individuals.

The results, the largest study of ancient human DNA in the Americas to date, also revealed that native populations at the time of Columbus’ arrival were much smaller than Europeans believed.

In the early 1500s, historian Bartolomé de las Casas estimated that there were over 3 million natives on Puerto Rico and Hispaniola, home to modern-day Haiti and the Dominican Republic.

But extrapolating from the genetic data they culled, researchers put that number closer to between 10,000 and 50,000.

If correct, it would counter the common assumption that millions of Indigenous Caribbeans died as a result of Europe’s encroachment into the New World.

Its probable the numbers were inflated to impress European patrons but, said Reich, it doesn’t  lessen the atrocities committed by colonists.

‘This was a systematic program of cultural erasure,’ he added. ‘The fact that the number was not one million or millions of people, but rather tens of thousands, does not make that erasure any less significant.’