First Dates star reveals how he was scalded as a baby

A business consultant who went on Channel 4 dating show First Dates looking for love has revealed how he doesn’t regret the scars he has from being scalded as a toddler – because they’ve made him the man he is today.

Jay Watkin, 31, from Chippenham, Wiltshire, was badly burned as a tot after his mother accidentally poured boiling water on him.

He was just 13-months-old when he ran into his mum, Trisha Emery, 49, as she poured the kettle, which left him covered in burning water that ‘melted his skin down to the bone’.

The then toddler almost died and suffered severe burns to around 50 per cent of his body including his chest, back, left arm and leg, requiring multiple skin grafts and endless hospital stays.

Tattooed father-of-one Jay Watkin, 31, from Chippenham, was left with 50 per cent burns to his body and almost lost his life after his mother accidentally poured boiling water over him when he was just 13-months-old 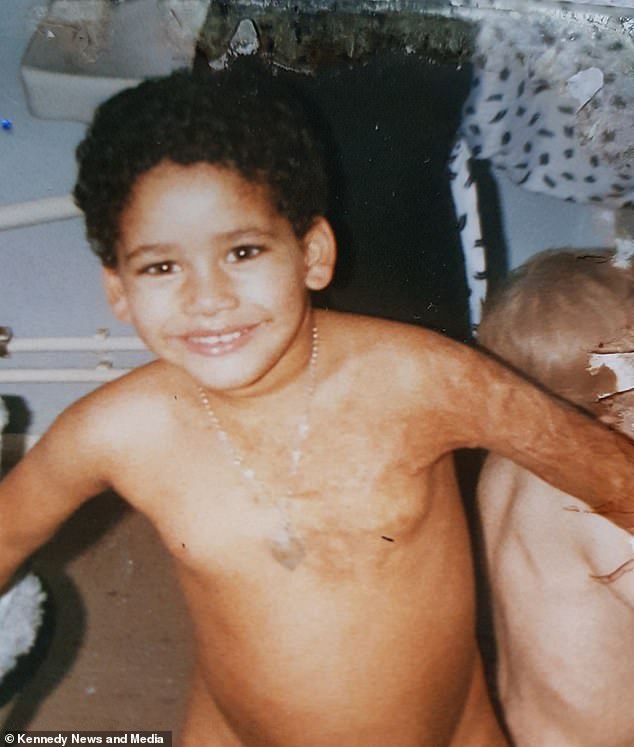 Jay pictured as a small child; growing up he had to endure multiple hospital stays to try and help his burns, and says he was bullied in PE at school over the way his skin looked

The obvious scars left Jay ashamed to join in at PE and he was mercilessly bullied for ‘looking different’ as well as being one of the few mixed-race children in his school.

It was not until Jay was in his mid twenties that he finally learnt to fully embrace what happened to him and had his scars incorporated into an elaborate tattoo design rather than having further surgery to cover them.

Trisha bravely admits that she has spent the last 30 years blaming herself and it was only recently when Jay sat her down and told her it was not her fault that she has finally forgiven herself.

Now Jay, 31, is a cheeky but honest dad-of-two who won the hearts of the viewers when he appeared on the Channel 4 show First Dates earlier in the year and refused to hide his scars.

Jay, from Bolton, Greater Manchester, but now living in Chippenham, Wilts, said: ‘I would see the way my mum would look at my scars, I could see the pain in her eyes.

‘I knew, I wasn’t silly, I could tell from the way she looked at me that she blamed herself.

‘It must have been very hard for her as a young mum at the time to have to explain to people how her son ended up with his body so disfigured by burns.

‘You can just imagine people’s reactions. It would have been ‘what the hell have you done? How did that happen?’ – and so she felt responsible, as you would as a parent.

‘She always blamed herself as she was the one pouring the hot water. She will always think that if she could have held onto it, or if she’d not buckled when I bumped into her, but she can’t think these things.

‘My mum now knows that this is a part of me. I had opportunities to discuss surgery to remove the scar and make it look aesthetically pleasing and I made the choice to keep it there. 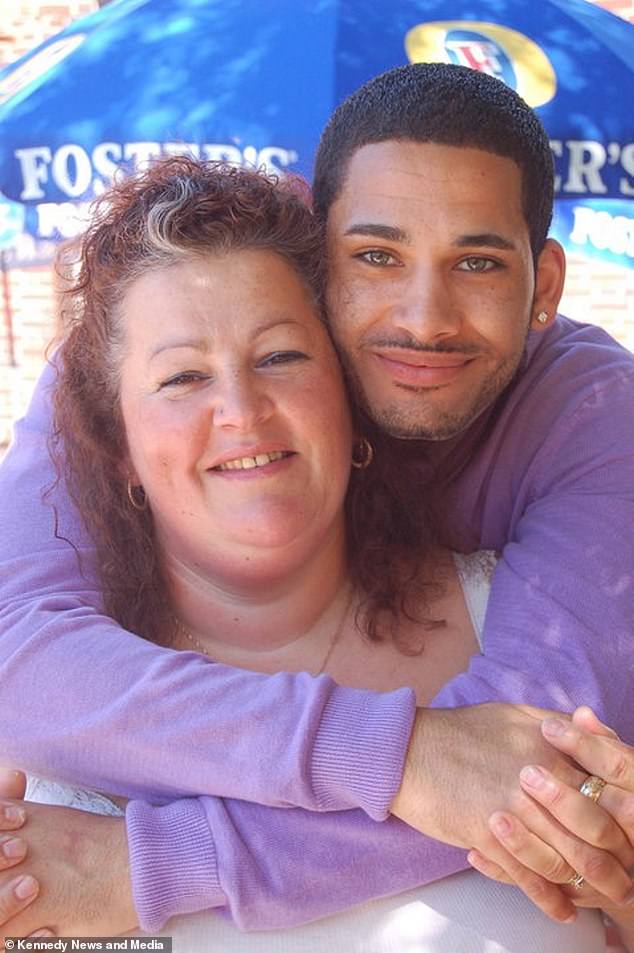 Blame: Jay’s mother Trisha Emery, 49, has spent 30 years blaming herself for the accident and Jay says he could see pain in her eyes everytime she looked at his skin 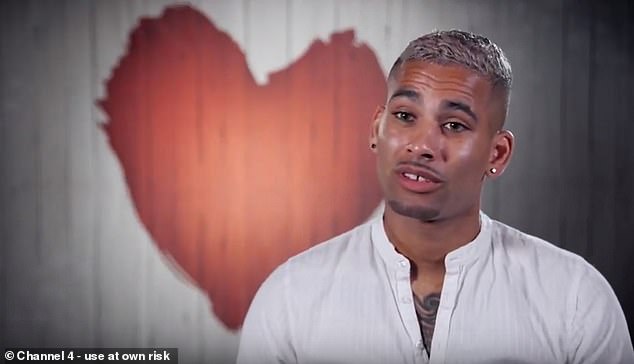 ‘It has been the biggest and most character defining part of my life. To get rid of it now would remove part of my soul with it.’

After being rushed to hospital, Jay was in a critical condition and remained in hospital for three months.

He needed multiple immediate skin grafts to replace the damaged skin and then numerous further grafts to cope with his body as it grew.

The grafts left a ‘web’ of skin from his left pectoral to his left bicep which ripped on two occasions requiring surgery to repair the large tear.

As he has grown up, he has helped me deal with it myself. It is only in the last three or four years that I have seen that he is right. I felt so bad for such a long time…

Trisha, who also lives in Chippenham, said: ‘His skin was coming off down to his bone. It was horrific.

‘He was then in and out of hospital for the first four years of his life all the time, often once a month. It was very hard.

‘His scar was bad and I felt really bad. He has confidence now and a big heart – but he wasn’t always like that.

‘I agree that these things made him who he is. But for a long, long time I felt shameful and blamed it all on myself.

‘But he has said to me ‘mum, it was an accident and you didn’t mean it’.

‘As he has grown up, he has helped me deal with it myself. We have all lived and learned through it.

‘It is only in the last three or four years that I have seen that he is right. I felt so bad for such a long time. I really did.’ 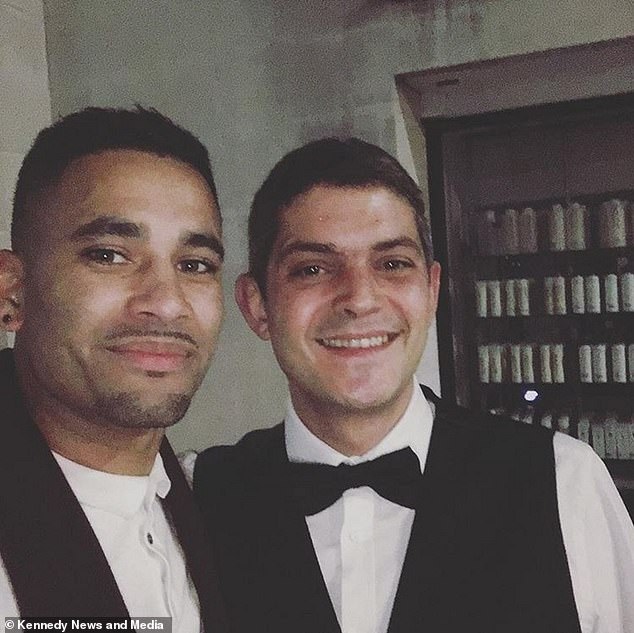 The scars made Jay stand out even more at school and left him terrified of taking his top off.

Taking part in PE, going swimming or getting changed all became something that terrified him.

He was so badly bullied that one day Trisha found him covered in blood in the kitchen after shredding his skin with a scourer trying to get rid of the scars and the colour so he could look like the other boys.

Trisha said: ‘I once found him in the kitchen with a scrubbing brush and he was trying to rub off his skin.

‘There was blood dripping everywhere. I had to sit him down and explain that we are all the same underneath.

‘He was a very shy boy. He could be happy and confident around family but at school people would bully him over his scars and his colour.’

Jay said: ‘I grew up as a mixed race or black person in a white family in the north of England so I stood out anyway.

‘Combine that with all of my scars, taking my top off in the school changing rooms or at swimming pools and things was probably the hardest thing on planet earth to do.

‘It was almost impossible because of how I looked. That incident was the biggest thing in my life and probably in my family’s life. 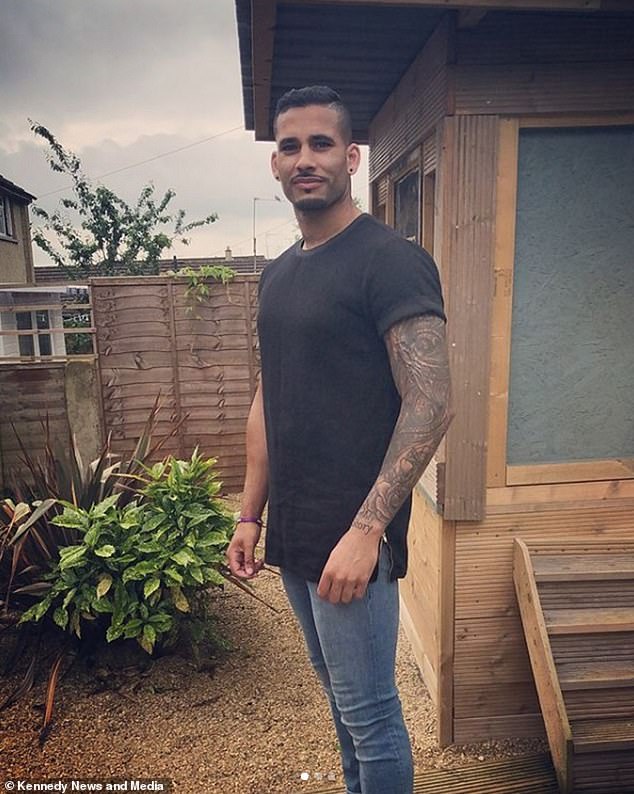 Bullied: Jay says he was ‘destroyed’ by cruel bullies who would target him for ‘being black, for looking different’

‘I nearly died a number of times. My body melted and transformed into something else effectively.

‘I was badly bullied at school. It destroyed me inside. I was bullied for being black, for looking different. I was covered in burns, I wouldn’t take my top off.

‘It affected me so much. It made me very shy, I didn’t start to open up until I left secondary school, and it still took me a long time.

‘I would say that despite my growing confidence after school, I didn’t learn to really accept my scars properly until I was about 25.’

However after having two children of his own [Amara, four, and Jay-b, two], Jay has realised just how important what he experienced was to him and embraced his past – and his scars.

Jay said: ‘Having my own children was a huge part of it. I want to be strong for my children and show them how I can deal with it.

I was badly bullied at school. It destroyed me inside. I didn’t start to open up until I left secondary school, and it still took me a long time…

‘When my mum sees my tattoo around my scars, which tell a story about my life and incorporate my scars within the tattoo, she is proud of me.

‘The scars are highlighted in the tattoos, they do not cover them. It took a long time for her to accept it like this, but she is there now.

‘Now I’m an ambassador for a number of different charities and I want to share with people what I went through – not as a sob story, but hopefully to help others in similar situations.’

Trisha, who works as a tailor and is a mum-of-four and step-mum-of-one, has been through her own journey of acceptance but credits Jay help in her learning to forgive herself.

Trisha said: ‘It’s been a tough battle myself learning to accept what happened and Jay has been there when I needed him. He sat me down and said ‘there’s one thing I need you to hear – you can’t keep blaming yourself’.

‘He held me in his arms and I balled my eyes out. He said ‘you can’t keep doing this to yourself. I’m happy and healthy and what happened, happened’. He forgave me in a way.’

Jay is now an ambassador for Bullies Out and is looking for opportunities to work with other charities to help others.