First-ever study into Italians’ genetic diversity reveals it dates back 19,000 years ago

Researchers have dissected the evolutionary history of Italians for the first time, revealing their extraordinary diversity dates back 19,000 years.

The study shows that northern and southern Italians evolved differently over time due to contrasting environmental and ecological circumstances that resulted in the peculiarities of their gene pools.

The results help to explain the differences in the health of both groups, as well as their predisposition to certain diseases.

The team sequenced the entire genome of participants from both locations, resulting in more than 17 million genetic variants that were compared to 600 human remains dating from the Upper Paleolithic to the Bronze Age.

The team identified traces of post-glacial migrations in those living in northern Italy, who also presented a close relation to ancient European cultures such as the Magdalenian and the Epigravettian  – these groups were mainly situated in what is now France and Spain.

On the other hand, southern Italians were found to have a close relation with Neolithic human remains from Anatolia, modern-day Turkey, and the Middle East, and with Bronze-Age remains from south Caucasus – a region that extends into Africa.

Researchers also discovered peculiarities characterizing people living in the north and south that evolved due to different environments that contribute to reducing the risk of kidney inflammation and skin cancers, as well as the risk of diabetes and obesity, favoring a longer lifespan.

Researchers have dissected the evolutionary history of Italians for the first time, revealing their extraordinary diversity dates back to 19,000 years ago. The results showed exact culture that impacted both the northern and southern regions of the country

Marco Sazzini, one of the principal investigators of this study and professor of molecular anthropology at the University of Bologna, said: ‘Gaining an understanding of the evolutionary history of the ancestors of Italians allows us to better grasp the demographic processes and those of environmental interactions that shaped the complex mosaic of ancestry components of today’s European populations.’

‘This investigation provides valuable information in order to fully appreciate the biological characteristics of the current Italian population.’

‘Moreover, it let us understand the deep causes that can impact on this population’s health or on its predisposition to a number of diseases.’

For this study, which is published in BMC Biology, the team sequenced the entire genome of 40 participants, which brought forth 17,495,290 single nucleotide variants (SNVs). 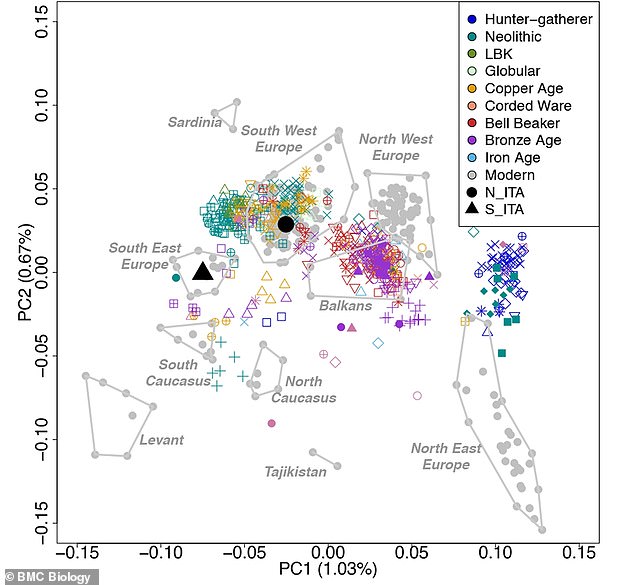 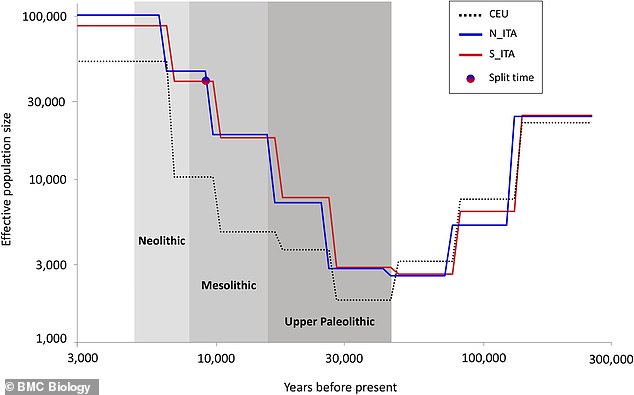 After analyzing the genomes of the southern Italian participants, researchers discovered that the post-glacial migrations traces were not present and noted that more recent events significantly reshaped their gene pool

The scientists then compared the SNVs against the genetic variants observed in 35 other populations from Europe and from the Mediterranean, and then against those found nearly 600 human remains dating from the Upper Palaeolithic (40,000 years ago) to the Bronze Age  (4,000 years ago).

‘These comparisons reached such high levels of precision that it was possible to extend the investigation to very remote time periods with respect to those achieved by previous studies,’ the team shared in a statement.

Following these investigations, the team determined traces left in the gene pool by events that followed the last glaciation that ended about 19,000 years ago.

The oldest events leaving a trace in Italian DNA were the migrations that occurred during the Neolithic and Bronze Ages, which took place 7,000 and 4,000 years ago.

‘The results of this study show, on the contrary, that the earliest biological adaptations to the environment and migrations underlying Italians’ extraordinary genetic diversity are much older than previously thought,’ the team explained.

The team also evaluated and measured differences between the gene pools of participants from northern and southern Italy.

Stefania Sarno, researcher at the University of Bologna and one of the co-first authors of the paper, said: ‘We observe some partially overlapping demographic trends among the ancestors of these two groups from 30,000 years ago and for the remaining years of the Upper Palaeolithic.’

‘However, we observed a significant variation between their gene pools from the Late Glacial period, thus some thousands of years before those great migrations that happened in Italy from the Neolithic onward.’

The DNA of people living in northern Italy shows traces of these post-glacial migrations.

They also have links to ancient European cultures that lived in mostly in what is now France and Spain. 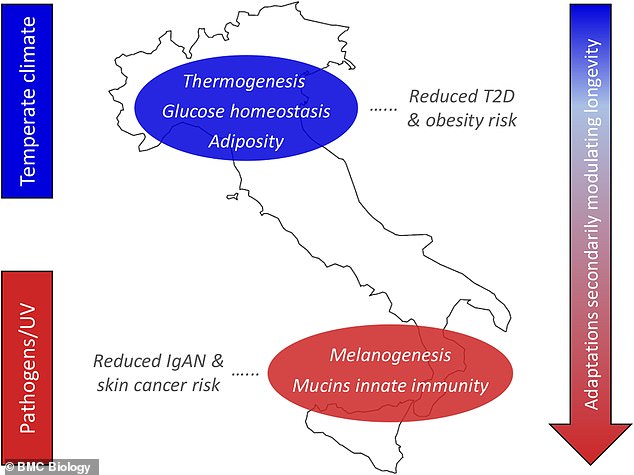 Along with have traces from different cultures, the study also revealed separate peculiarities in two groups’ gene pools. The metabolism of northern Italians adjusted to digest a diet high in calories and fat, making them a lower risk of diabetes. Southern Italians pigment that provides skin color was modified, which is why they are less likely to contract skin cancer

However, the team uncovered ancestry components even more ancient from eastern European hunter-gathers that walked the Earth 36,000 to 26,000 years ago.

This group later on spread to western Europe with migratory movements from ‘glacial refugia’ during the Late Glacial period.

After analyzing the genomes of the southern Italian participants, researchers discovered that the post-glacial migrations traces were not present and noted that more recent events significantly reshaped their gene pool.

This group has closer genetic relations with Neolithic human remains from what is now Turkey and the Middle East.

There are also traces with the Bronze-Age remains that were uncovered in northern parts of Africa.

‘Differently from the north of Italy, the south was a main hub for migratory movements, which first spread agriculture to the Mediterranean area during the Neolithic transition, and then, during Bronze Age, fostered a new ancestry component,’ the team explained.

Along with have traces from different cultures, the study also revealed separate peculiarities in two groups’ gene pools.

Those who migrate north experienced abrupt climate changes and environmental pressures similar to those of the Last Glacial Maximum, which forced biological adaptations.

For example, their metabolisms changed in order for them to digest a diet that was high in calories and fat. 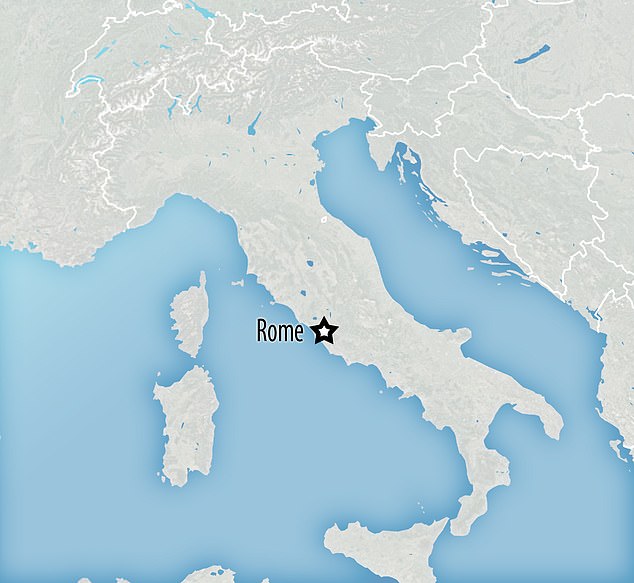 Paolo Garagnani, professor of experimental medicine and pathophysiology at the University of Bologna: said: ‘In the subjects from northern Italy, we observed changes in the gene networks regulating insulin and body-heat production as well as in those responsible for fat tissue metabolism.’

‘These changes could have resulted in key factors reducing the susceptibility to diseases like diabetes and obesity.’

Southern Italians, however, were basking in a warmer climate than their counterparts.

This environment caused changes in the genes encoding for mucins, which are proteins found in the mucous membranes of the respiratory and gastrointestinal systems and that prevent pathogens from attacking the tissues.

Paolo Abondio, Ph.D. student at the University of Bologna and another co-first author of this study, said: ‘These genetic adaptations may have evolved in response to ancient micro-organisms.’

‘Some scholars have linked some of these genetic variants with a reduced susceptibility to Berger’s disease, which is a common inflammation affecting the kidneys and is indeed less frequent in the south than in the north of Italy.’

When it came to southern Italian peculiarities, the researchers found the genes that modify the production of melanin, which is the pigment that provides skin color.

They believe this occurred due to more intense sunlight and because of a higher number of sunny days are experienced in Mediterranean regions.

These changes may have also contributed to a lower incidence of skin cancers among southern Italians.

Claudio Franceschi, emeritus professor of the University of Bologna, said: ‘We observed that some of these genetic variants have been also linked to a longer lifespan.’

‘This is also true for other genetic modifications which are characteristic of southern Italians.’

‘These are found on genes involved in the arachidonic acid metabolism and on those encoding for FoxO transcription factors.’