The first members of the congregation for the Queen’s state funeral have arrived at Westminster Abbey.

The grand oak doors of the UK’s most important church – where Her Majesty married Prince Philip and had her coronation – opened at 8am, three hours before the service starts.

2,000 royals, world leaders and hundreds of members of the public have began filing into the Abbey as billions around the world will watch Her Majesty’s state funeral.

Most of the VIPs arrived by coach, meeting at the Royal Hospital Chelsea before being put on a bus into Central London. Britain’s ministers – past and present – were among the first arrivals including Nadham Zahawi, Ben Wallace and Jacob Rees-Mogg.

Michael and Carole Middleton, the parents of Kate, the Princess of Wales, arrived two hours early for the service, followed by Tom Parker Bowles, the son of Queen Consort, Camilla.

And outside hardy royal fans defied no-camping rules, as people of all ages set up tents, deck chairs and even a makeshift minibar to grab premium seats for the spectacle that will see 2million flood into the capital. By 8.30am member of the public were told that the procession route was full and began diverting people to Hyde Park to watch on the big screens.

The doors of Westminster Abbey opened at 8am, ahead of the arrival of the first mourners for the funeral of the Queen. The King’s Guards trooped through the gates of Abbey, with two soldiers stationed at the metal gates awaiting the start of proceedings.

Amid concerns that London will be ‘full’ today – and a lack of hotel rooms – scores of people began bedding in to line The Mall in central London over the weekend, despite rules – seemingly loosely enforced – preventing people from setting up camp.

This morning, before dawn, stewards told campers to take down their tents. Huge crowds have also formed in Windsor, where the Queen will be buried this evening.

Several who slept in central London overnight said friends and family told them they were ‘mad’ to carry out the overnight vigil, but insisted they would not miss the occasion.

Michael and Carole Middleton – the parents of the Princess of Wales, Kate, arrived two hours early for the state funeral 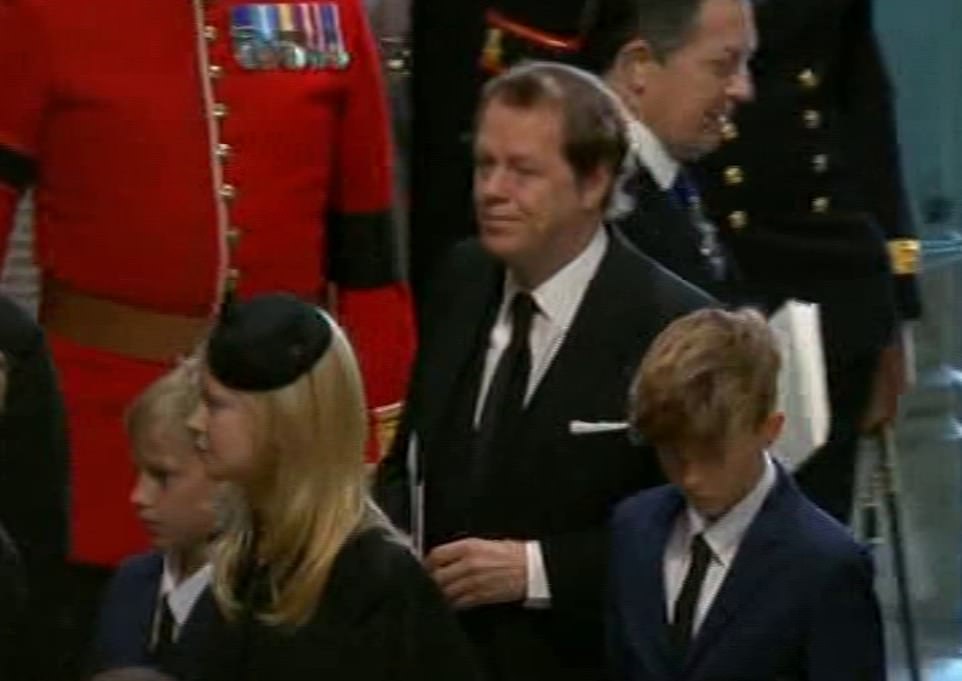 Tom Parker-Bowles, the son of Queen Consort, Camilla, is among the 2,000 people invited today 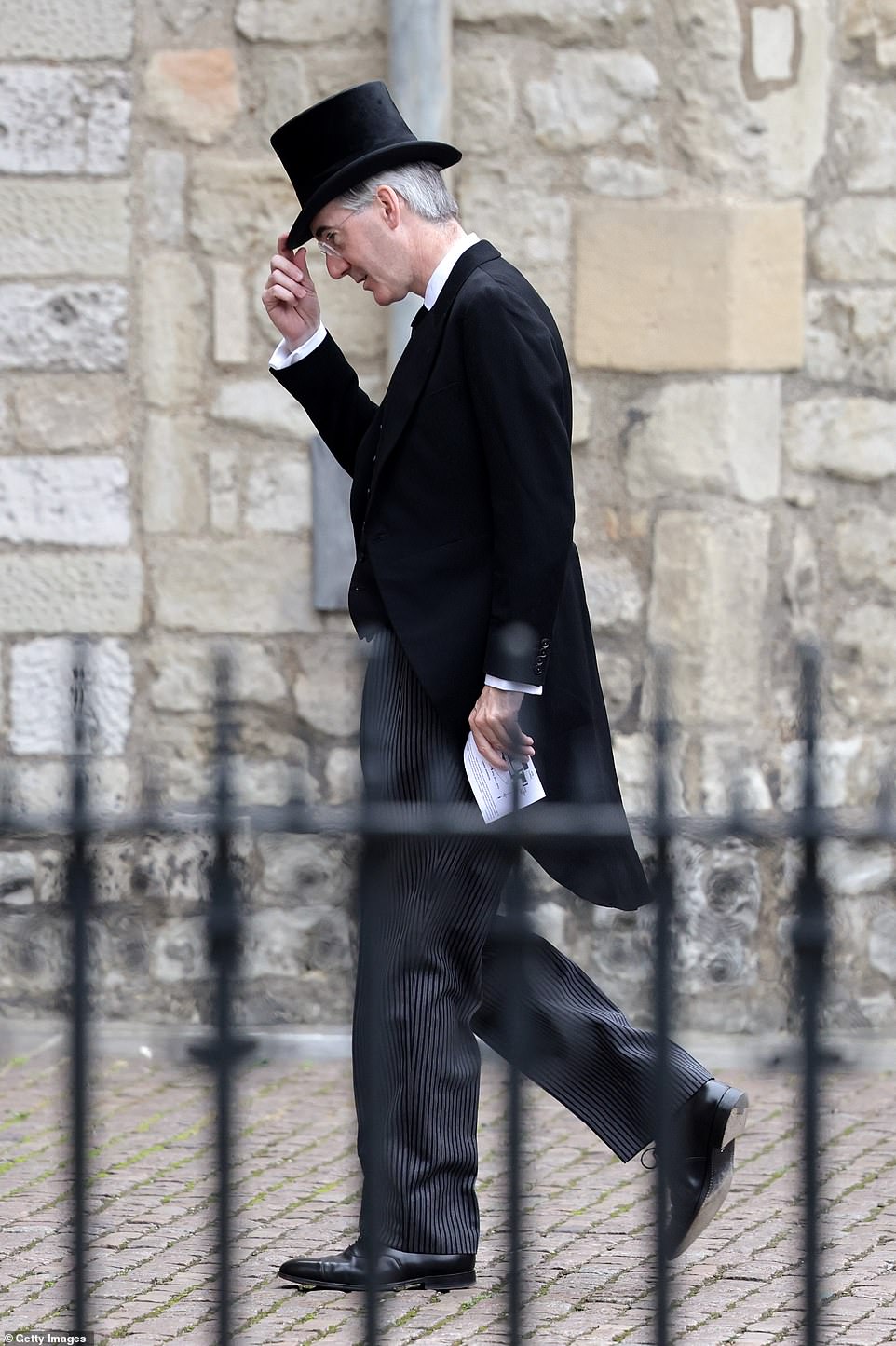 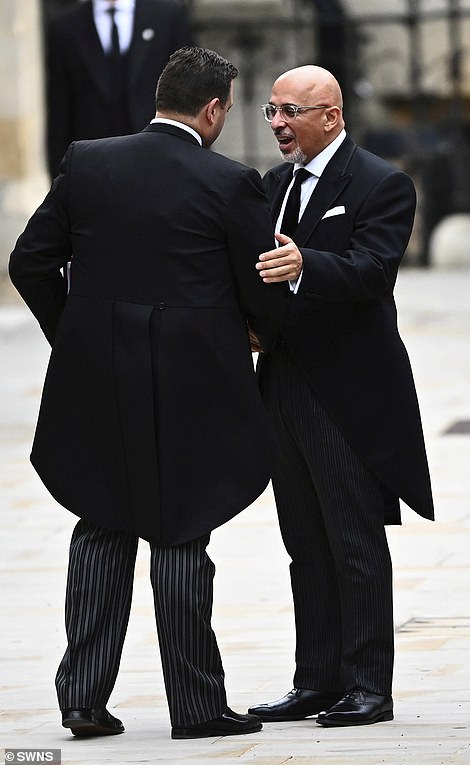 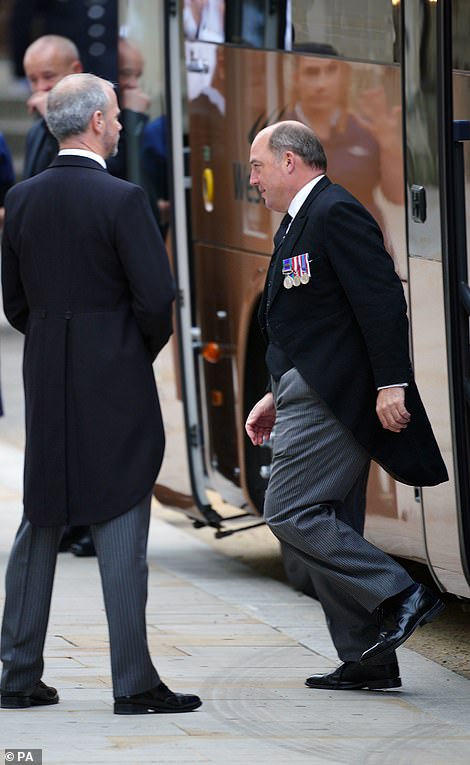 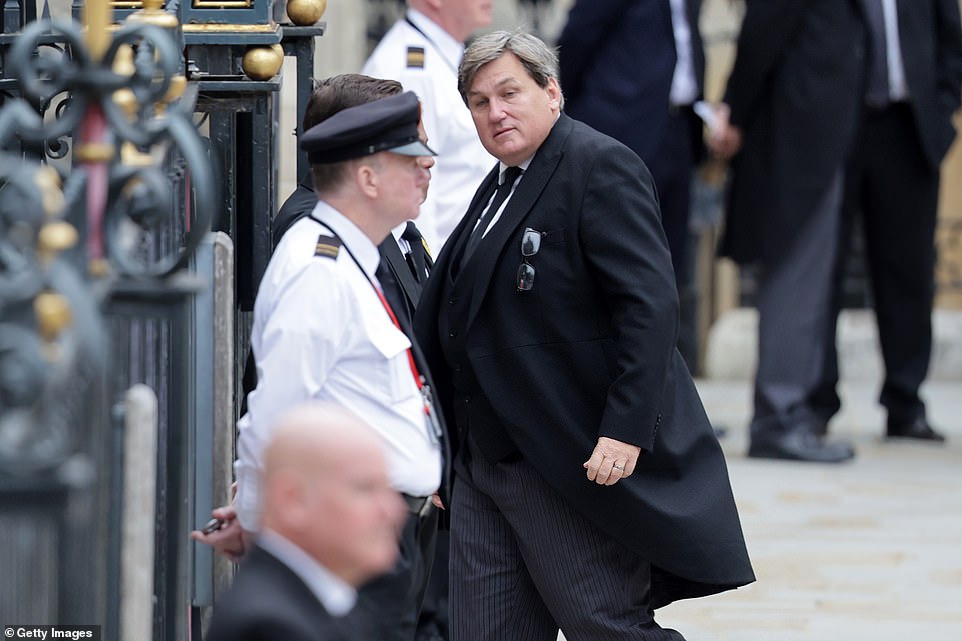 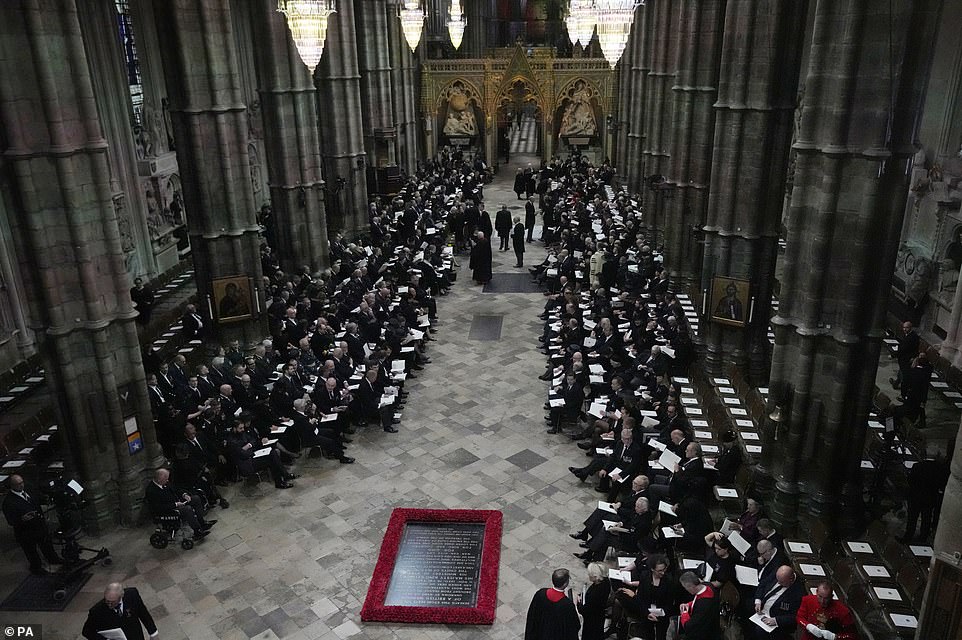 The Abbey fills ahead of the Queen’s funeral today 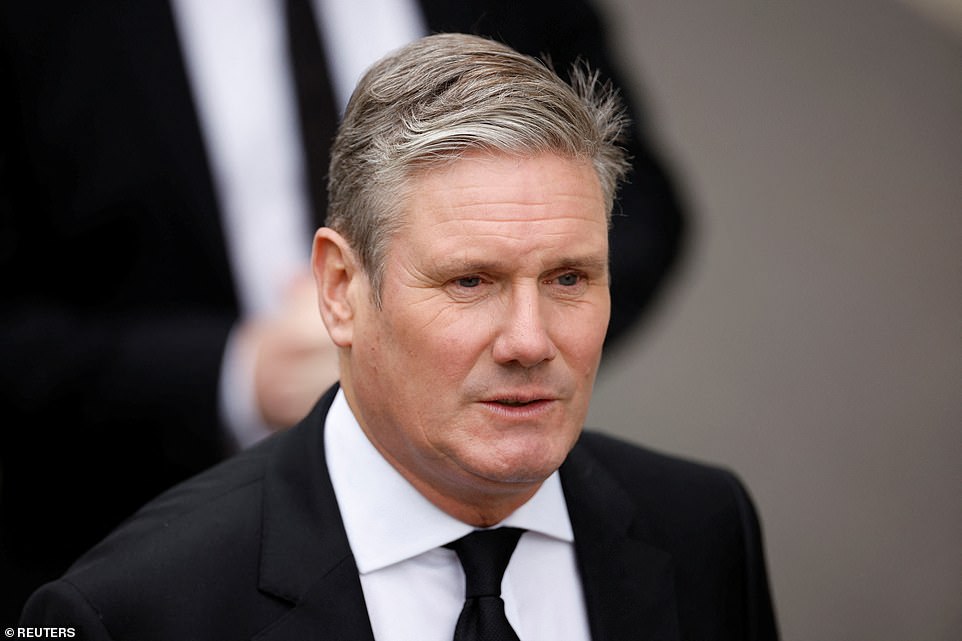 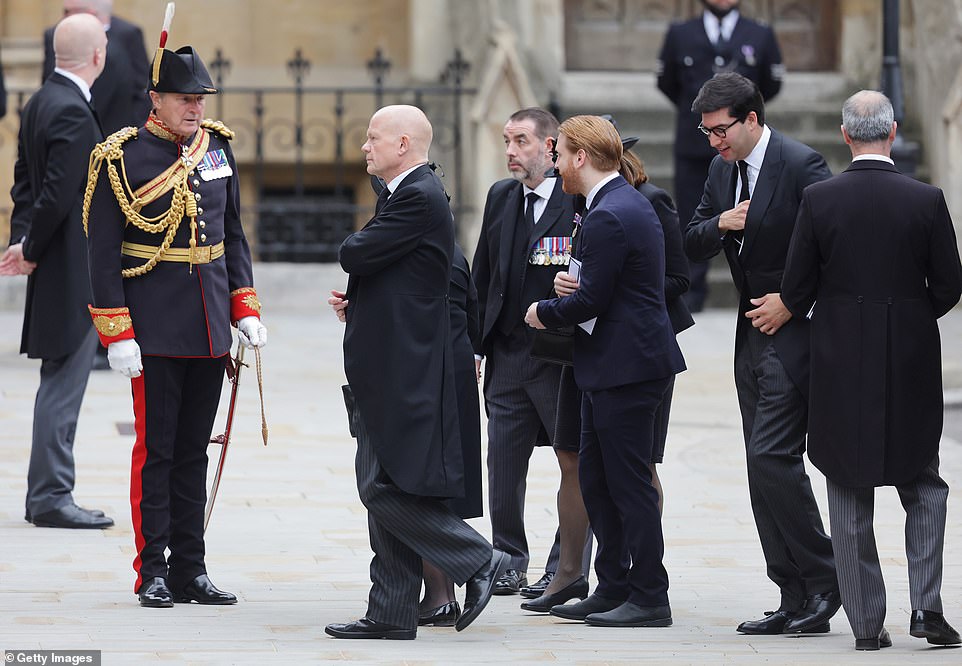 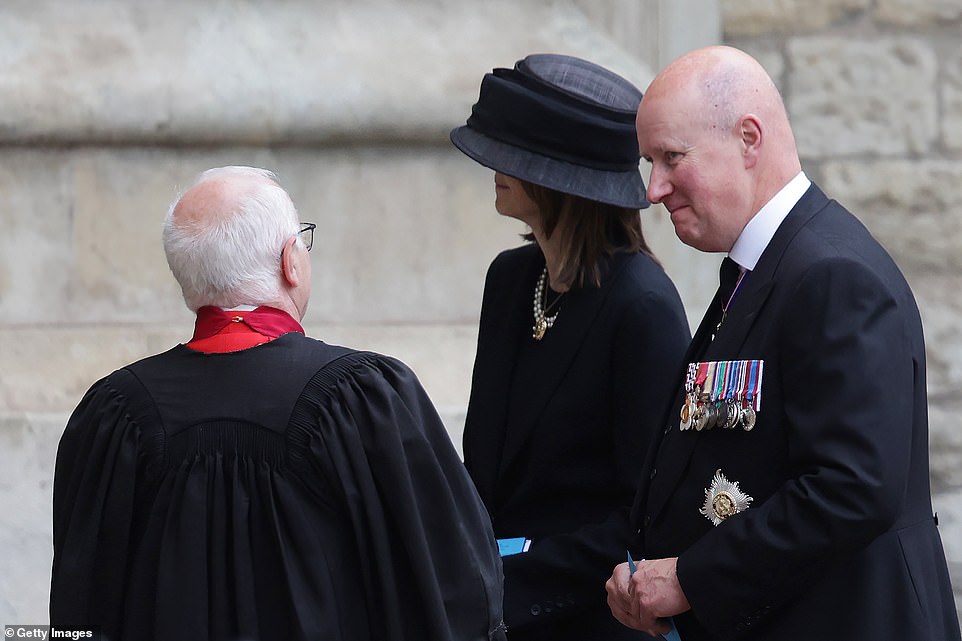 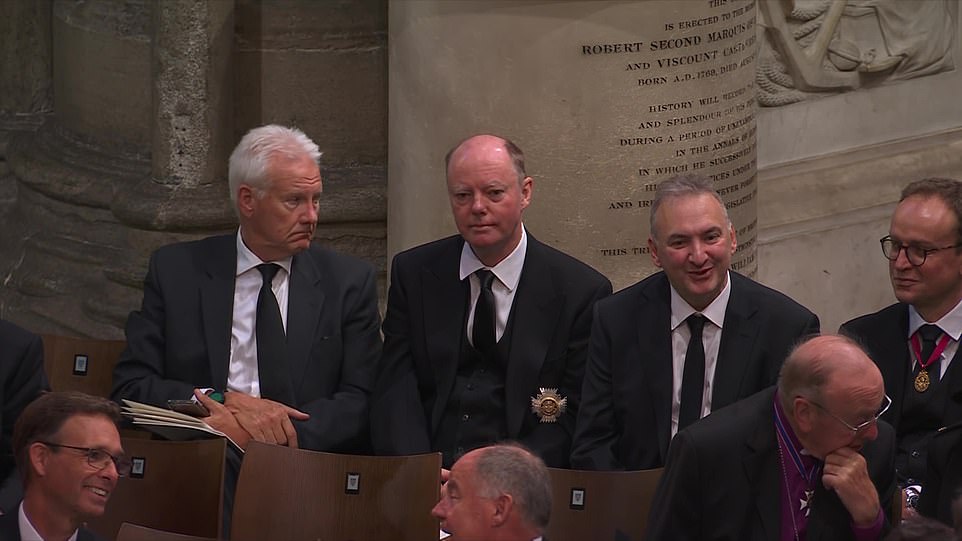 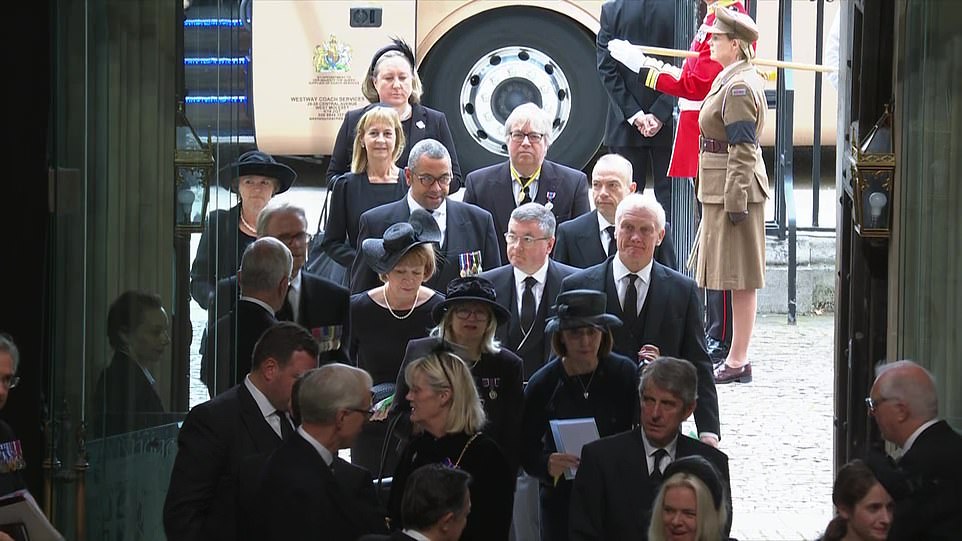 Foreign Secretary James Cleverly and Chris Heaton-Harris, Secretary of State for Northern Ireland, arrived with VIPs on a coach 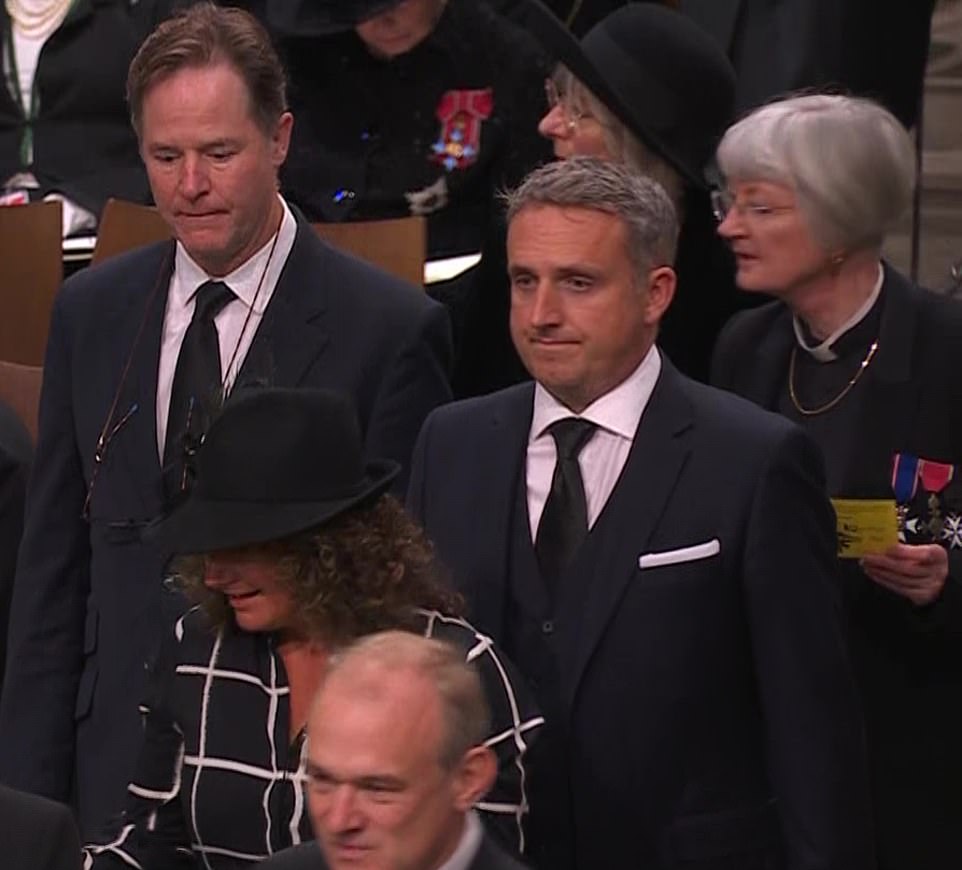 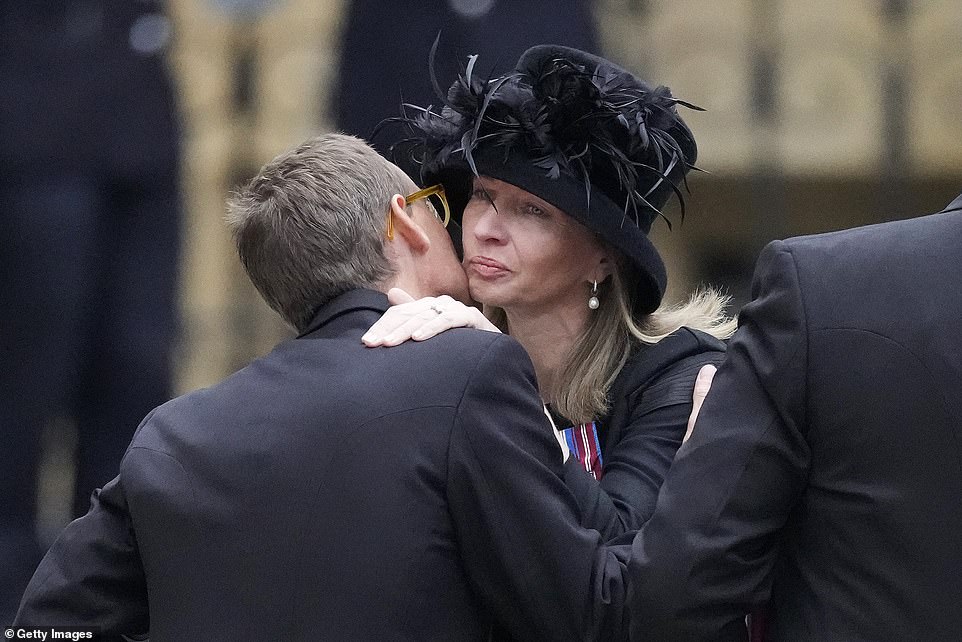 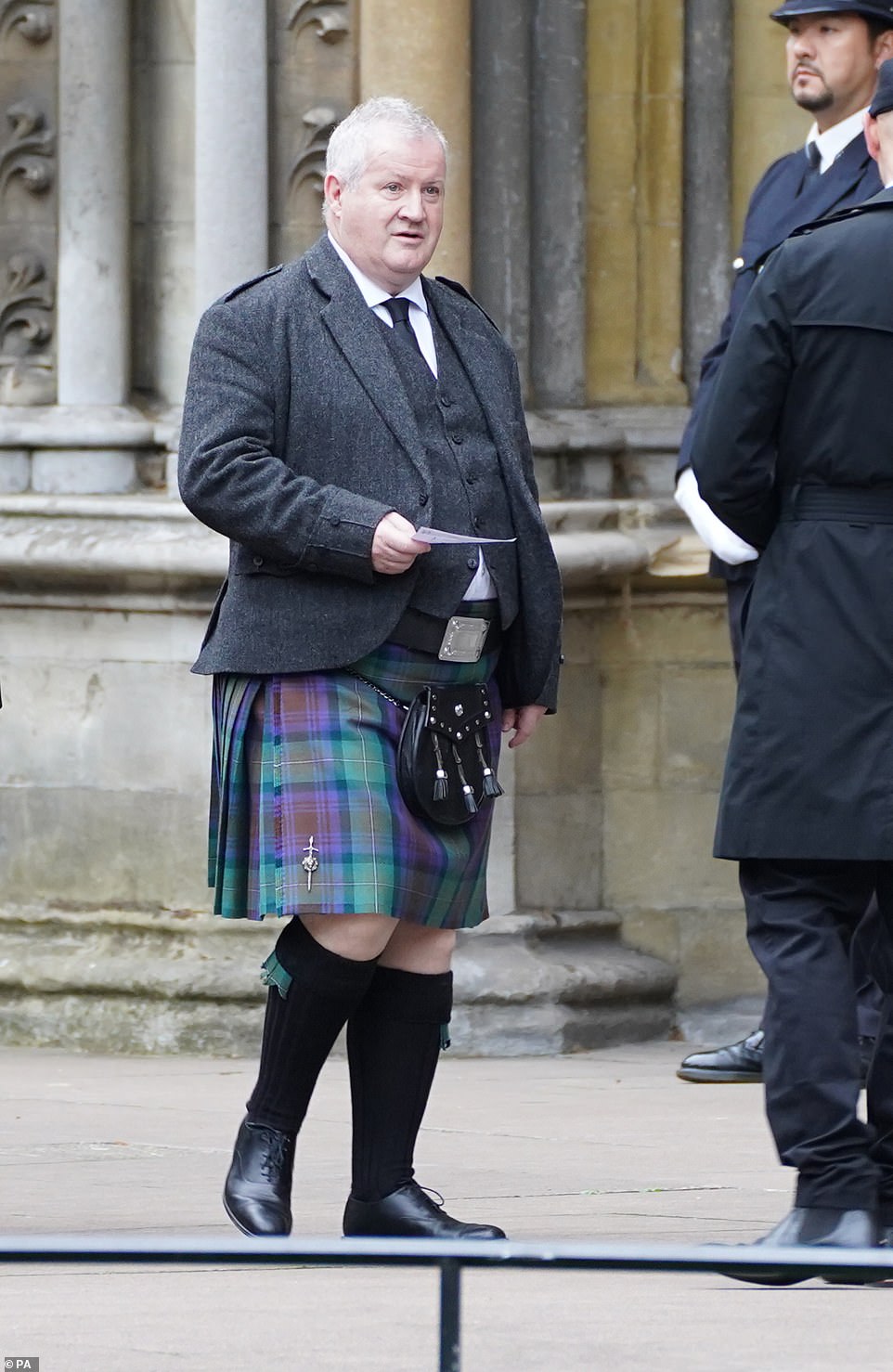 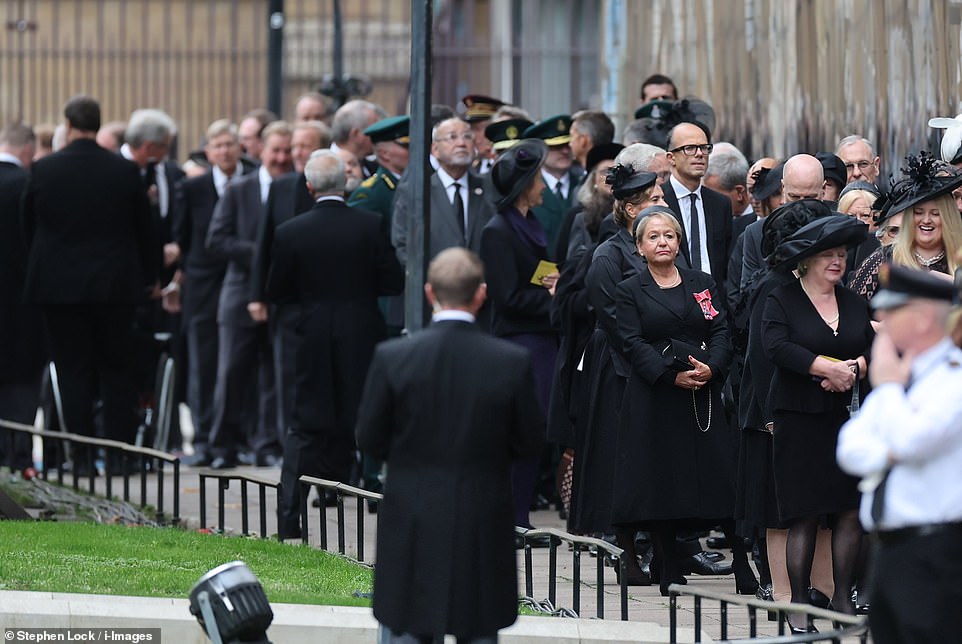 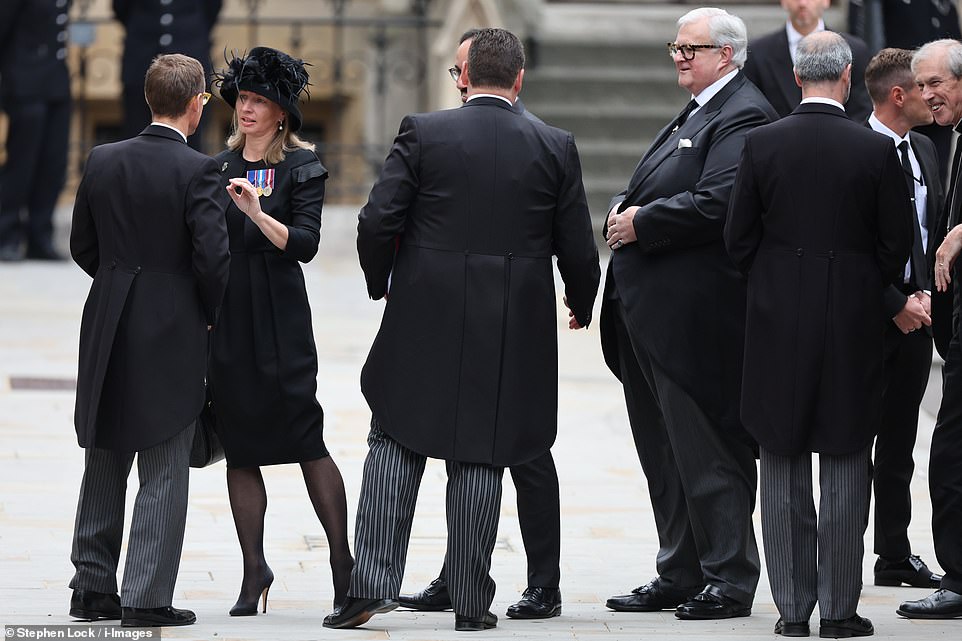 David Morgan-Hewitt, aka ‘Mr David’, from the Goring Hotel in Belgravia, centre right, would always greet the Queen when she arrived and was at today’s funeral

Among them were school friends Christine Manning, 75, and Dianne Donohue, 73, from Leek in Staffordshire, who slept in a pop-up tent.

Mrs Donohoe, a retired housewife and grandmother-of-three, said: ‘Yes, the advice was not to camp but we disobeyed. We’ve had a good catch-up, we’ve enjoyed it.

‘We were sleeping in the tent and at 4.30am I woke up and asked Chris if she was awake, she was, so we had a whisky and lemonade and a pork pie. A couple more hours’ sleep, then onto the prosecco.

‘We had to take our tent down at 7am because the police told us to, but we couldn’t do it, so we had to get some lad to help us.

‘We’re out of pork pies sadly but we’ve got sausage rolls, and we’ve got some gin now the whisky’s run out – we’re chipper.’

Miss Manning, a retired waitress, added: ‘My kids said we were mad.

‘Well, “mental” is the word they used. They said we were idiots for doing this.

Among those at the top of the Long Walk were Windsor Castle warden Shannon Carroll, 27, and her pals Samantha Geraghty, 24, and Heidi, 26, who declined to give her surname.

Shannon told MailOnline they had arrived at 6am after getting up at 4am to walk from nearby Maidenhead where they all live.

She added:‘I’m here to pay my respects to an incredible woman who also happens to be my boss. I’ve worked at the Castle for five years and it’s the least I can do.

‘The Queen was a great employer and an inspirational leader. I don’t think we will ever see anyone like her again.’ 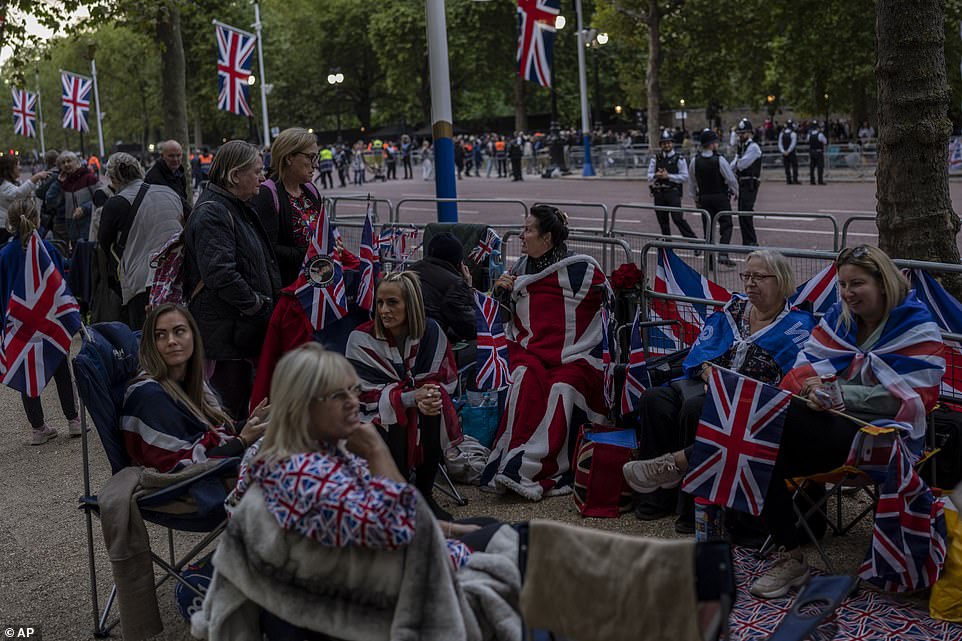 A group, wrapped in Union Flags, camped out on chairs overnight to be in London for the funeral 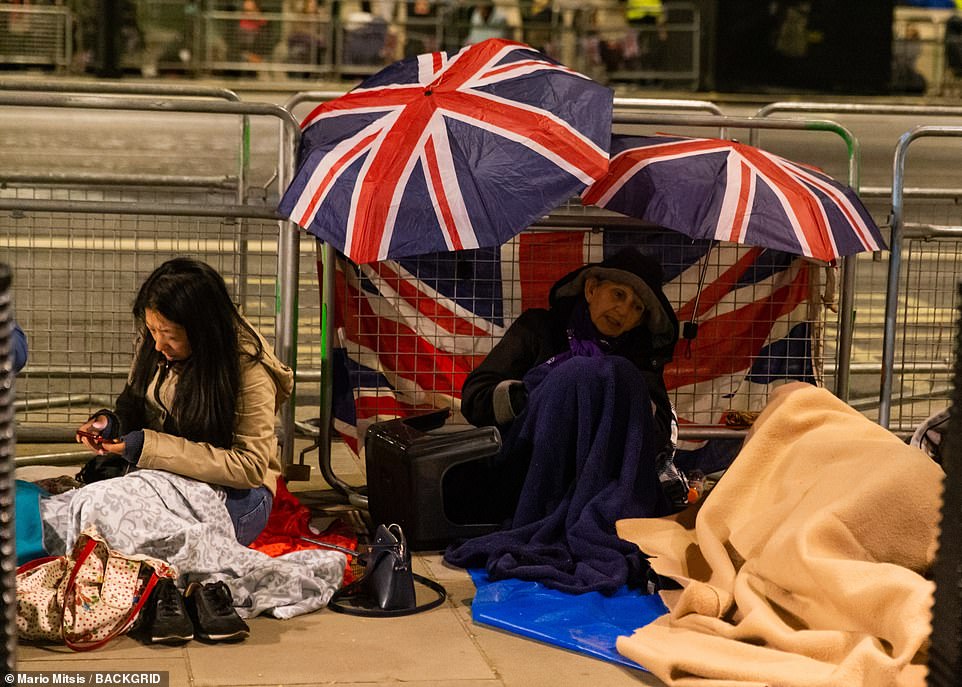 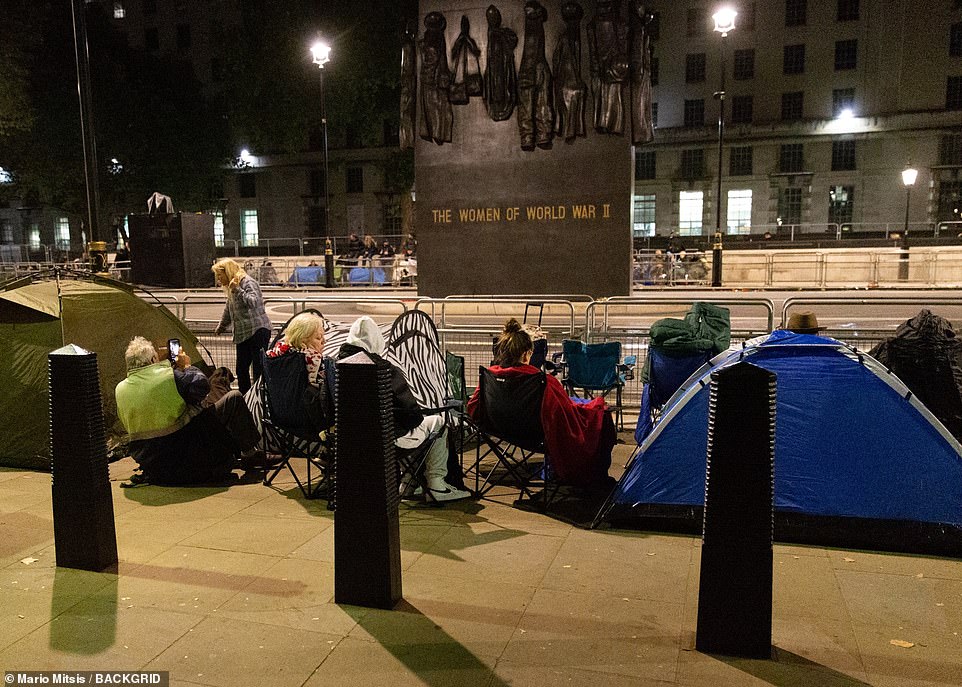 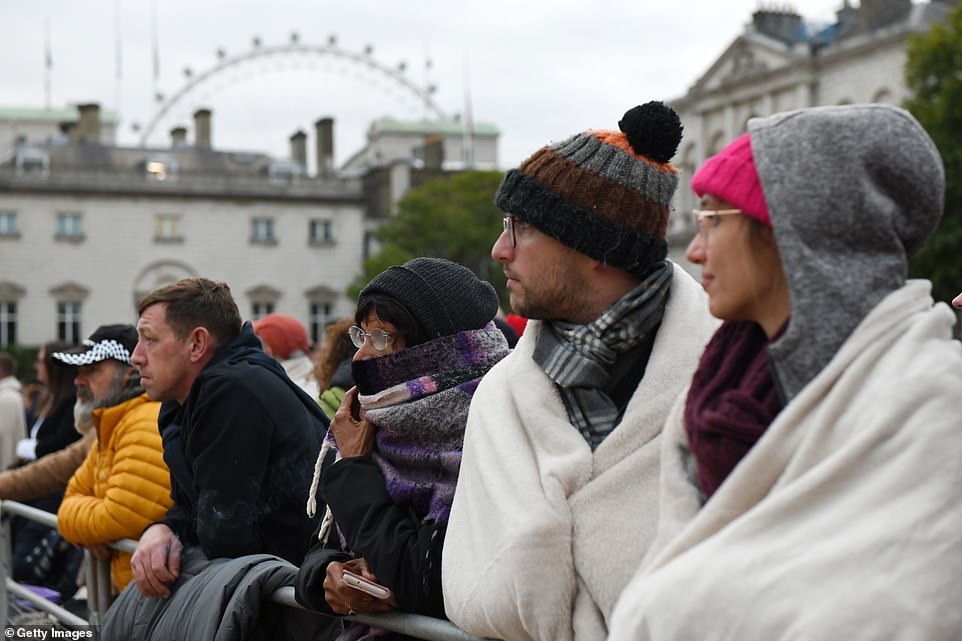 Mourners wrapped in blankets wait with others at Horse Guards ahead of the State Funeral Of Queen Elizabeth II. Many have camped 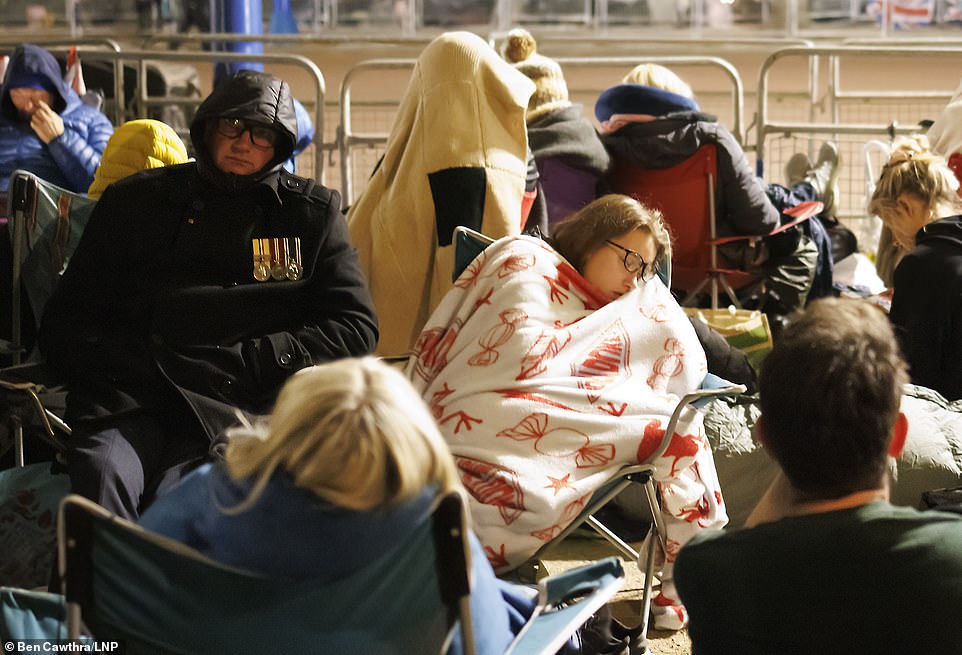 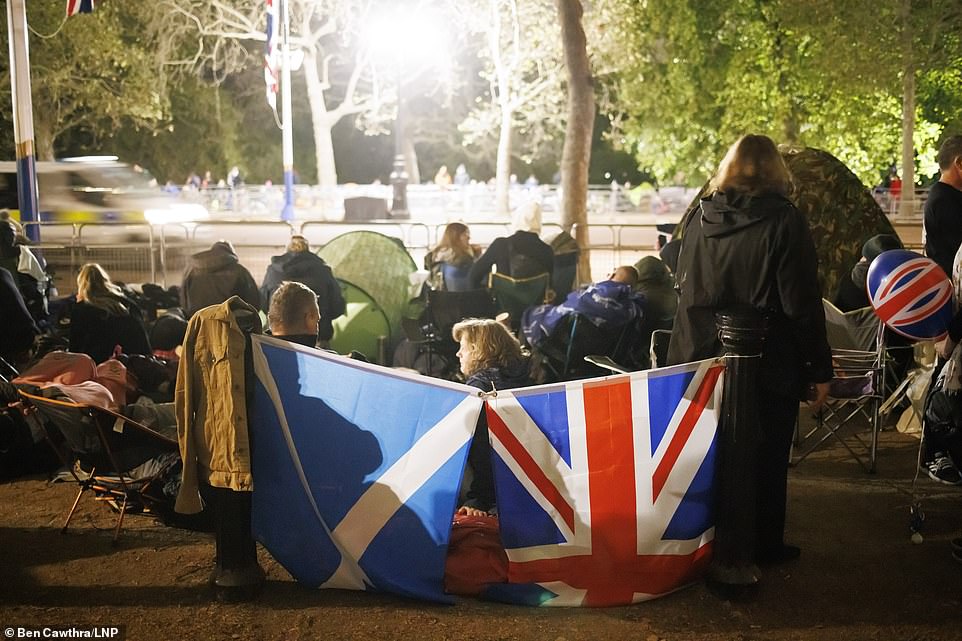 Members of the public camped out over night on The Mall near Buckingham Palace, ahead of a State Funeral 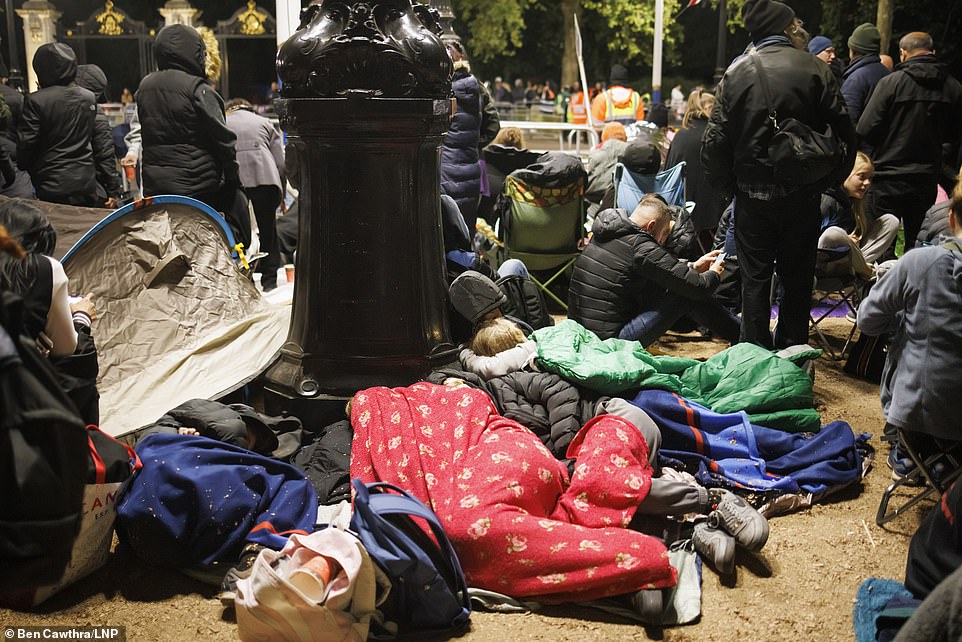 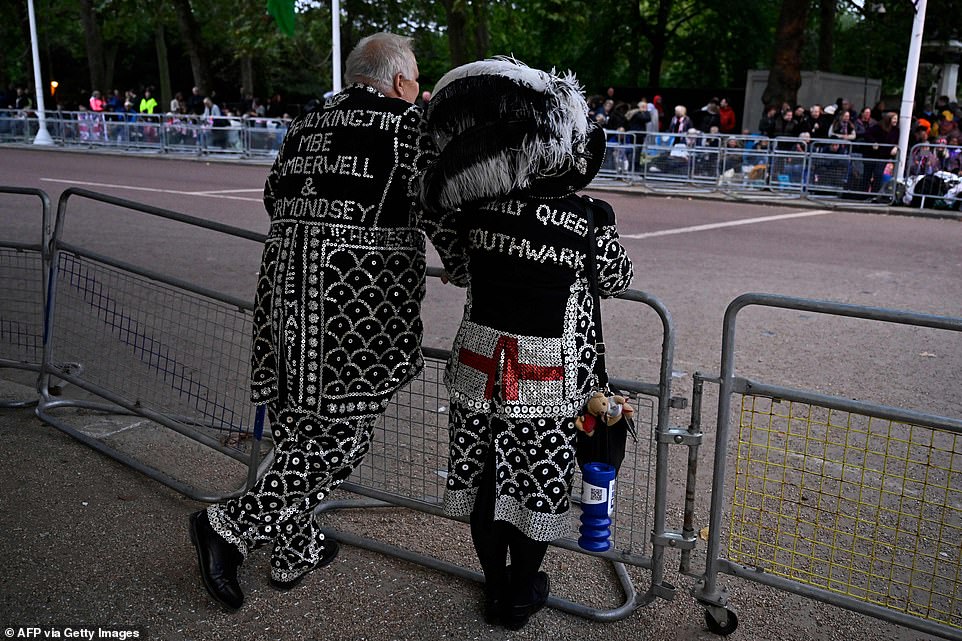 A Pearly King and Queen line the Procession Route in London

Shannon said:’I queued up for 12 hours overnight Friday into Saturday and that was a very poignant and sombre experience.

‘It was incredibly quiet and still but it was at the same time very respectful and I wouldn’t have missed it for anything.’

Heidi said:’We are prepared for the day with snacks and drinks and it looks like it will stay dry. We will have a great view of the procession as it comes up the Long Walk and goes into the castle.

‘When we go here there were quite a few people here already but up the front where we are was surprisingly empty. I think we have the best spot to see history in the making.’

Samantha said: ‘It was an early start but well worth it. We will have a great view but we will have to watch the funeral service itself on our phones as we can’t see the big screens.’ 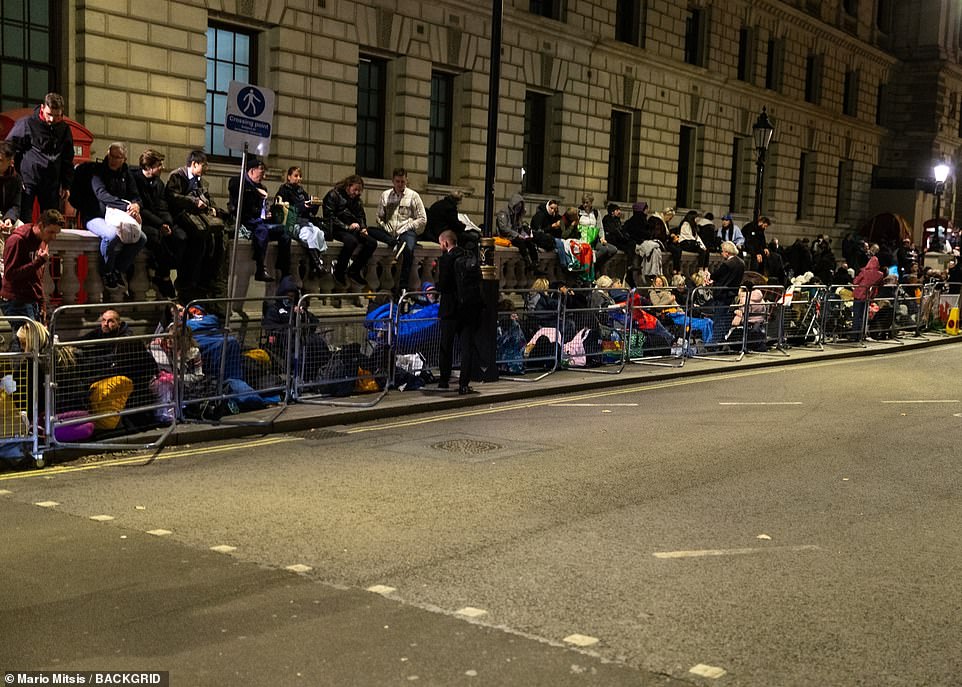 Mourners camped out close to Parliament Square this morning 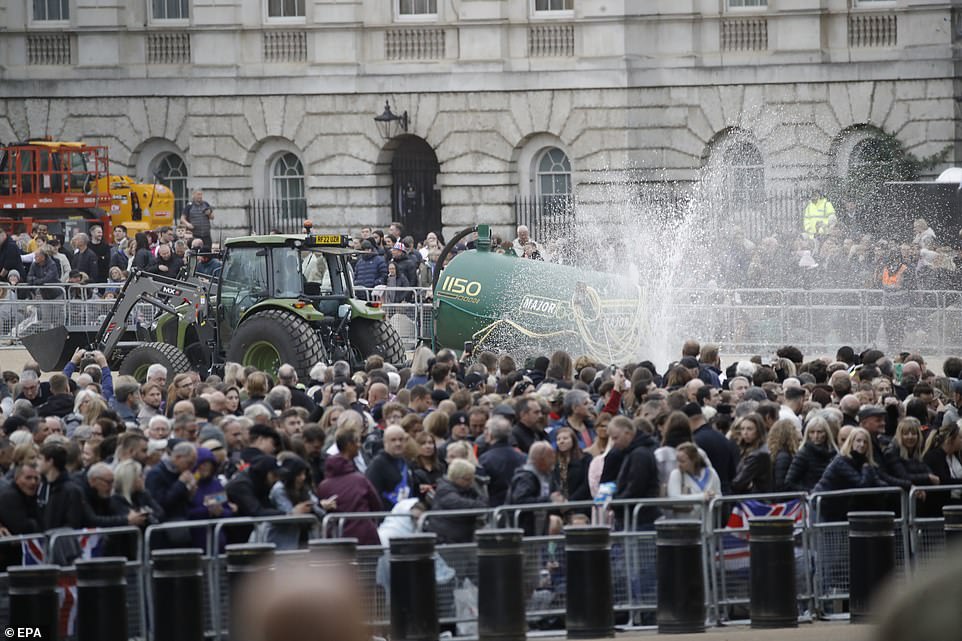 The Mall was a frenzy of activity yesterday, as people arrived to lay flowers nearby, get a glimpse of Buckingham Palace and Horse Guards Parade, and bag their vantage points for the funeral procession as it makes its way from Westminster to Windsor.

Tim Thompson, 35, from New Brunswick in Canada, and Charlie Shirley, 36, from north London, also slept in a tent on the Mall.

The pair became friends after being sat next to each other for William and Kate’s wedding in 2011, and resumed their same spot together on Saturday.

Miss Shirley said: ‘We do all the royal events together, it’s like we’re a family.

‘I saw Tim at the Queen’s Jubilee and we said that the next time we see each other would probably be at the Queen’s funeral – we didn’t expect it to be three months later.’

Mr Thompson said: ‘I keep four days’ holiday a year for royal events, so I had to be here.’

American businesswoman Nicole Alford, 40, paid around £1,300 for a last-minute flight to London on Thursday, and said she would camp out until after the funeral.

She said: ‘You don’t come all this way and then watch it on the TV. I want a front-seat of history.

‘My mom said: “I can’t believe you’re doing that.”

‘I said: “I can’t believe you didn’t think I would do that.”

‘Everybody thinks I’m crazy, but I managed five-and-a-half hours’ uninterrupted sleep on my first night camping out here, so I’m fine.’

Semi-retired teacher Ian Rhodes, 66, and his wife Sue, 58, from Alton in Staffordshire, arrived at the Mall at 11am yesterday (SUN) to claim their spot – although they said they would sleep in deckchairs rather than pitch a tent.

Mr Rhodes said: ‘The only other time I’ve queued overnight for anything was when Stoke City got to Wembley for the cup final in 1972, and I waited overnight at the club shop with my friends to get tickets.

‘People have said we’re mad, but sanity is relative.’

Mrs Rhodes said the couple’s two adult sons were a bit concerned about their parents ‘roughing it’ overnight in London, but said: ‘I told them we were going to do it anyway – when has their mother ever done what she was told?’

Paulette Galley, from Boston in Lincolnshire, said she was determined to stay on The Mall overnight.

The 54-year-old kitchen assistant, originally from south London, said: ‘I might not get any sleep but I don’t care. She was my Queen, and I want to pay my respects to her.

‘There is no way I wouldn’t be here.’