First Lady Jill Biden needed a helping hand after the heel of her shoe became stuck in the ground.

The mishap happened while she was being photographed with members of her motorcade as she was being escorted to Charles B. Wheeler Downtown Airport in Kansas City, Missouri.

Dr. Biden was assisted by a member of law enforcement that escorted her motorcade after her high heel became stuck in the ground.

First lady Jill Biden is is helped after getting the heel of her shoe stuck in the pavement while being photographed with member of law enforcement that escorted her motorcade before boarding her plane at Charles B. Wheeler Downtown Airport in Kansas City on Thursday 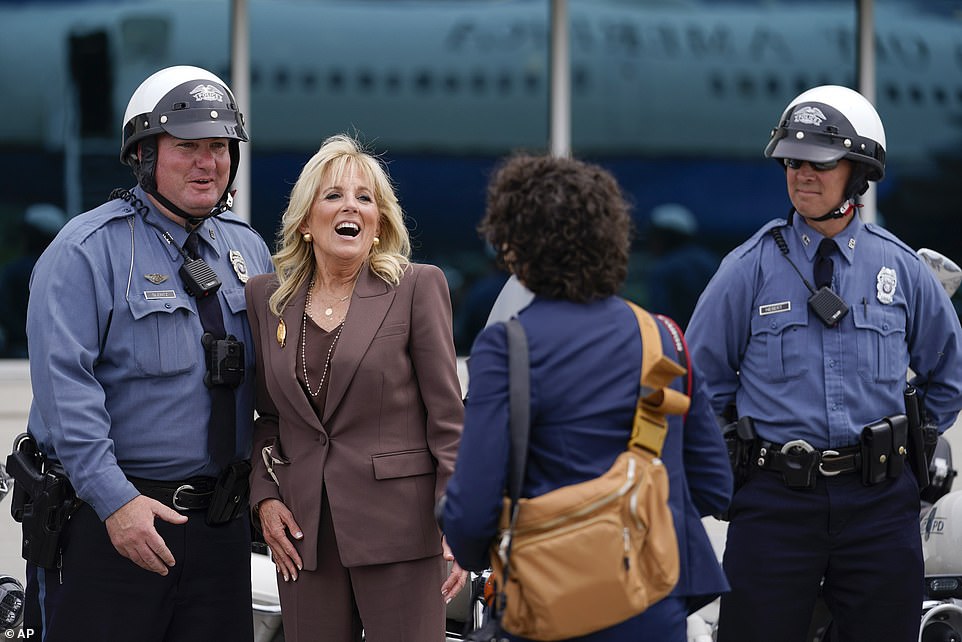 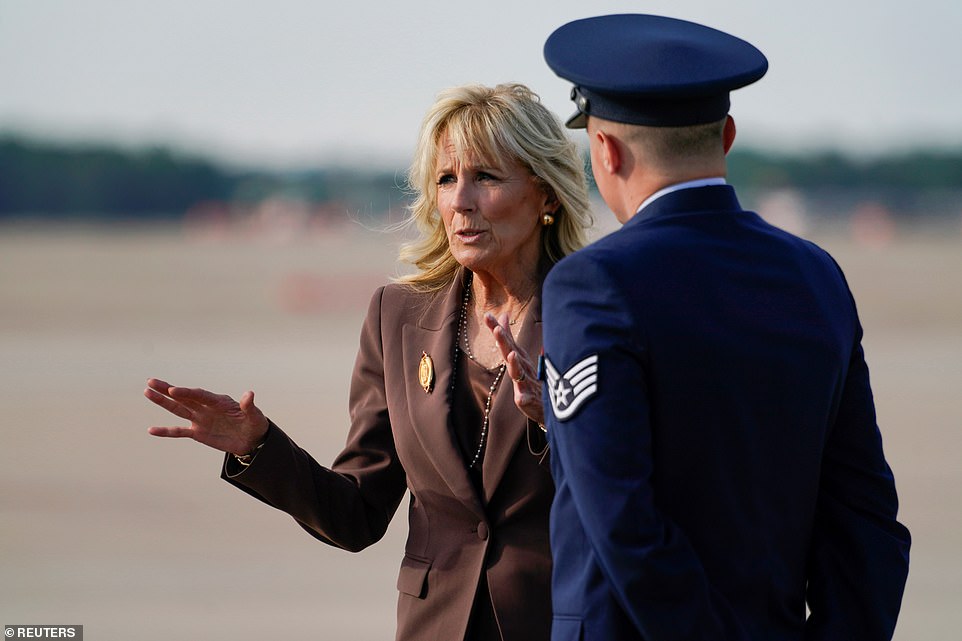 First lady Jill Biden talks to a greeter as she arrives at Andrews Air Force Base, Maryland, on Thursday

The First Lady arrived in Kansas City, Missouri on Thursday before travelling to Michigan to visit a community college.

The trip is part of a nationwide Covid-19 vaccination tour.

It comes as President Joe Biden said Thursday the nation had ‘turned the tide’ on the pandemic through vaccine distribution and economic recovery programs – as he defended tax hikes in his upcoming budget. 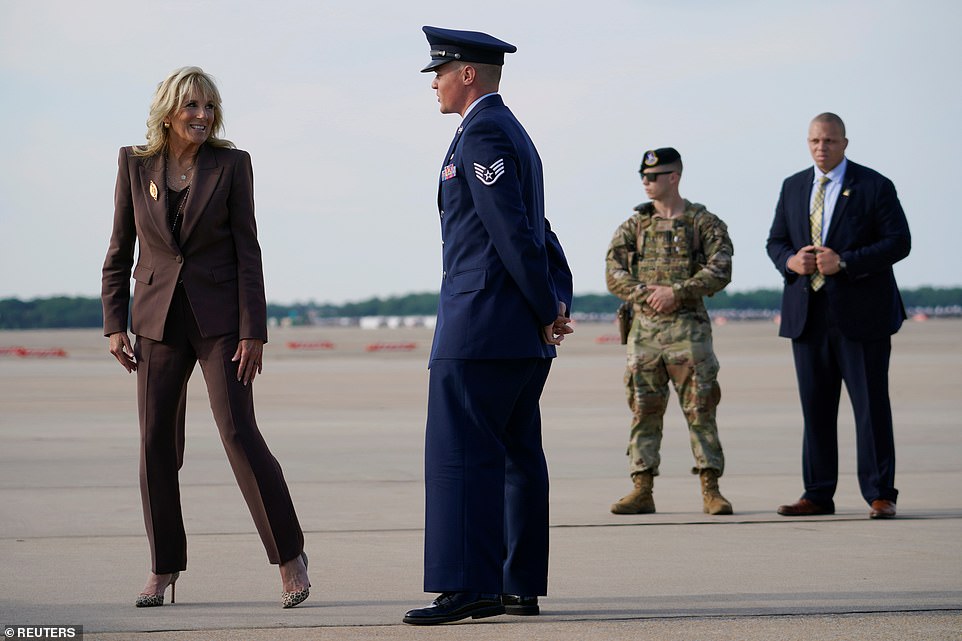 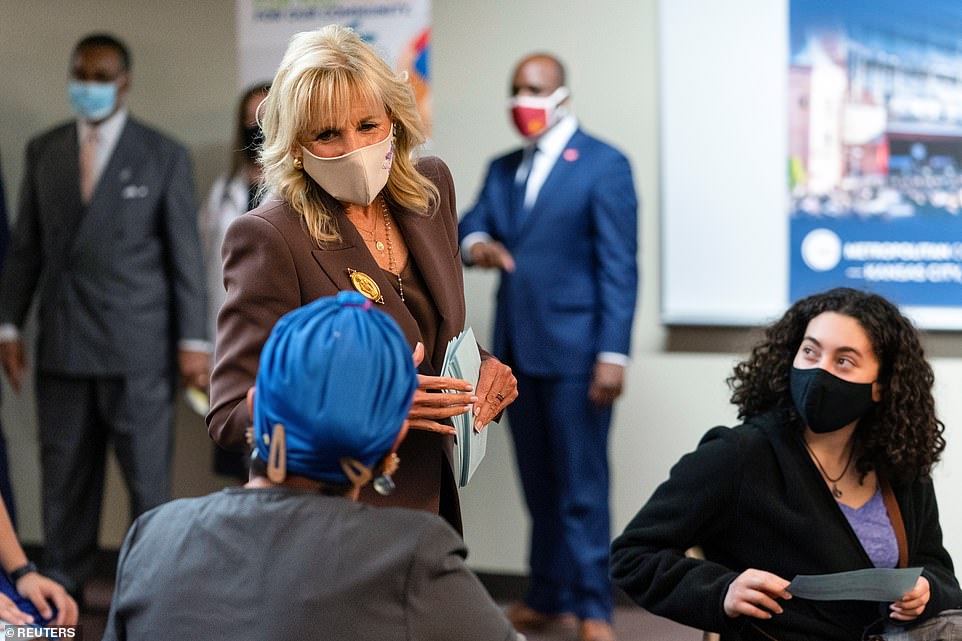 First lady Jill Biden hands out tuition vouchers and talks to people at a vaccine clinic at Metropolitan Community College, in Kansas City on Thursday 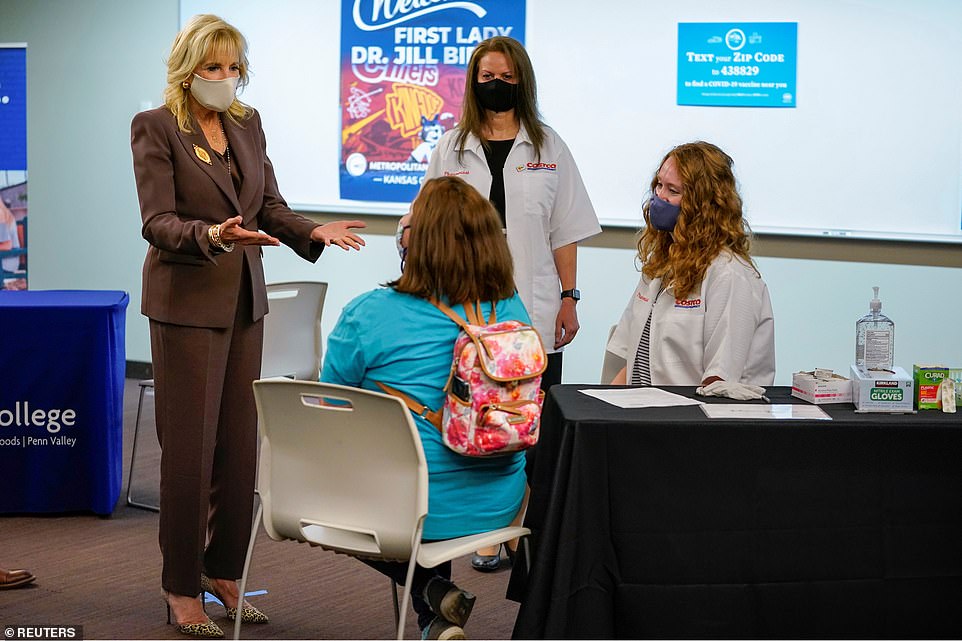 First lady Jill Biden talks with people at a vaccine clinic at Metropolitan Community College in Kansas City, Missouri, May 27 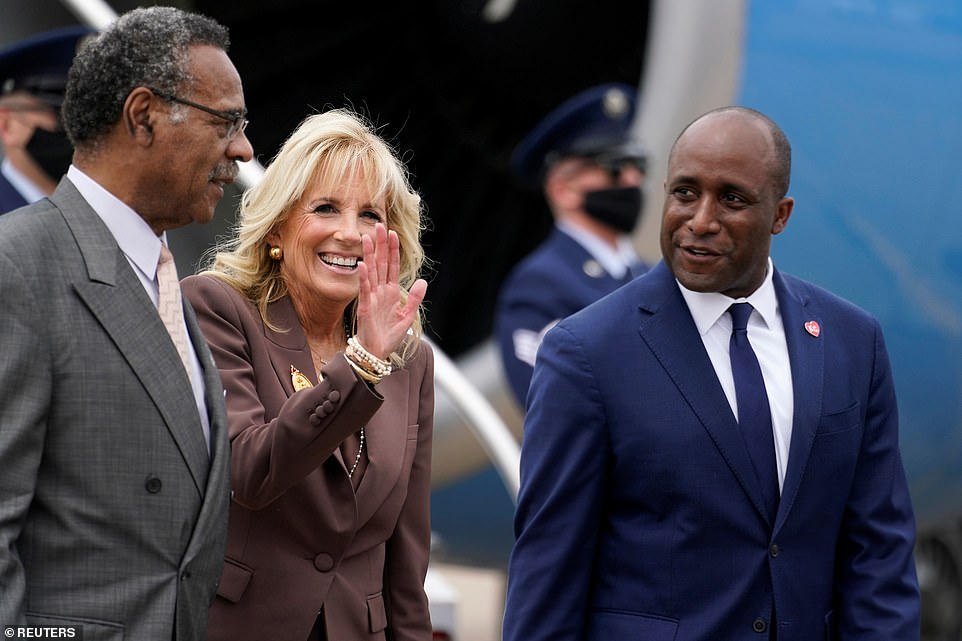 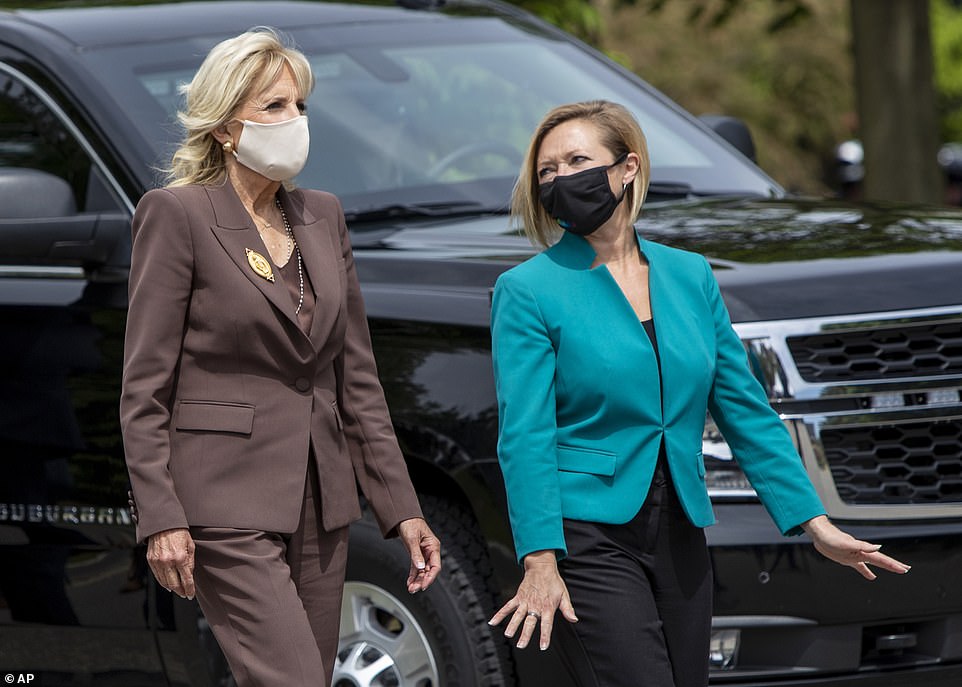 The country has ‘turned the tide on a once in a century pandemic,’ Biden said in remarks at Cuyahoga Community College in Cleveland.

He was back in town after having to cancel a planned campaign rally last March as the pandemic raged and GOP Gov. Mike DeWine closed large events, a move Biden said was the ‘right thing.’

Biden reinforced the message on Twitter, writing: ‘We’ve turned the tide on a once-in-a-generation economic crisis. And now we’re faced with a question: what kind of economy are we going to build for tomorrow?’ 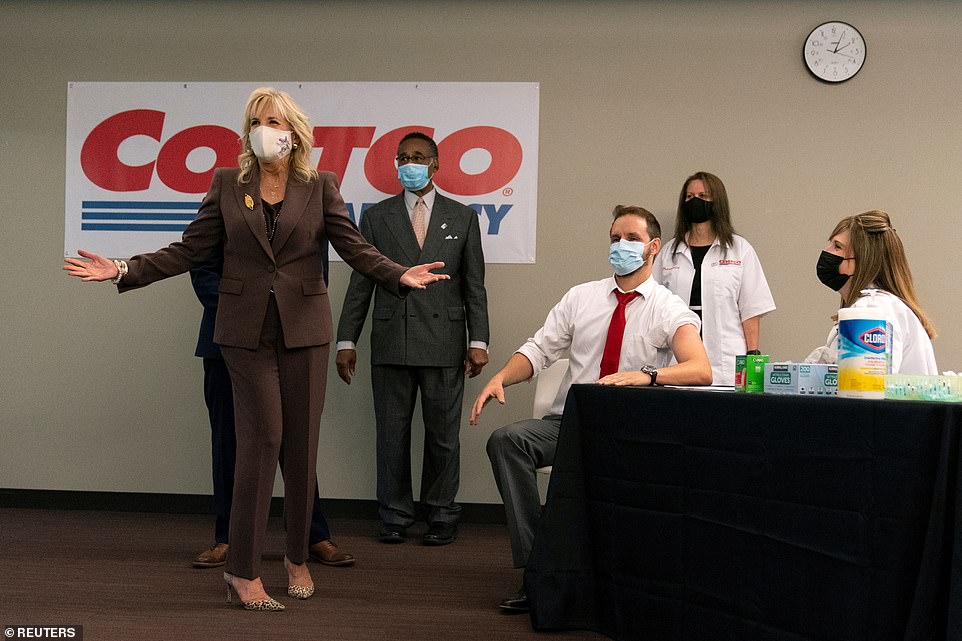 First lady Jill Biden gestures to media as she tours the vaccine clinic at Metropolitan Community College, in Kansas City, Missouri, May 27 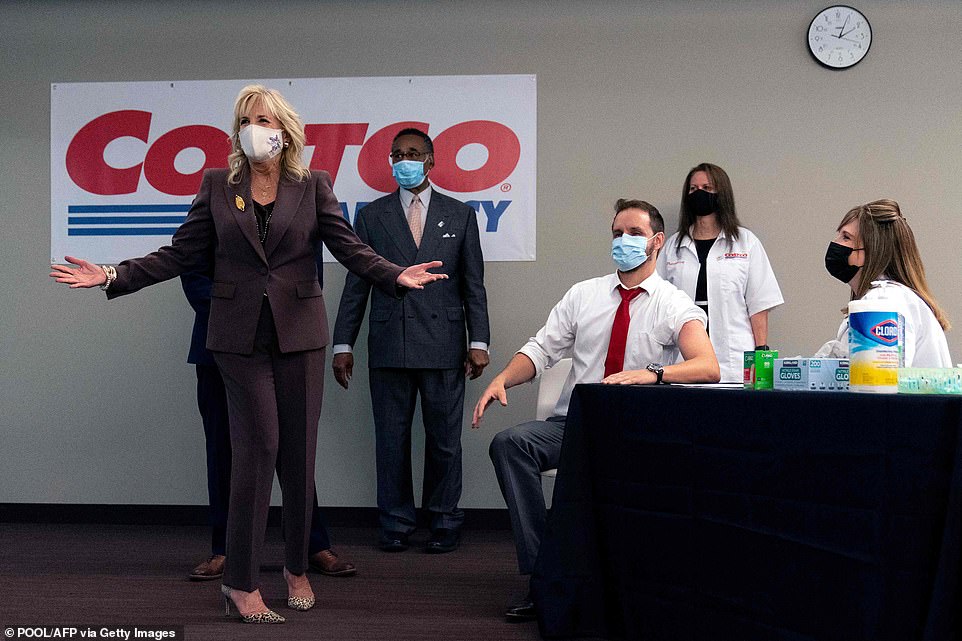 US First lady Jill Biden gestures to media as she tours a vaccine clinic at the Metropolitan Community College, in Kansas City, Missouri on May 27 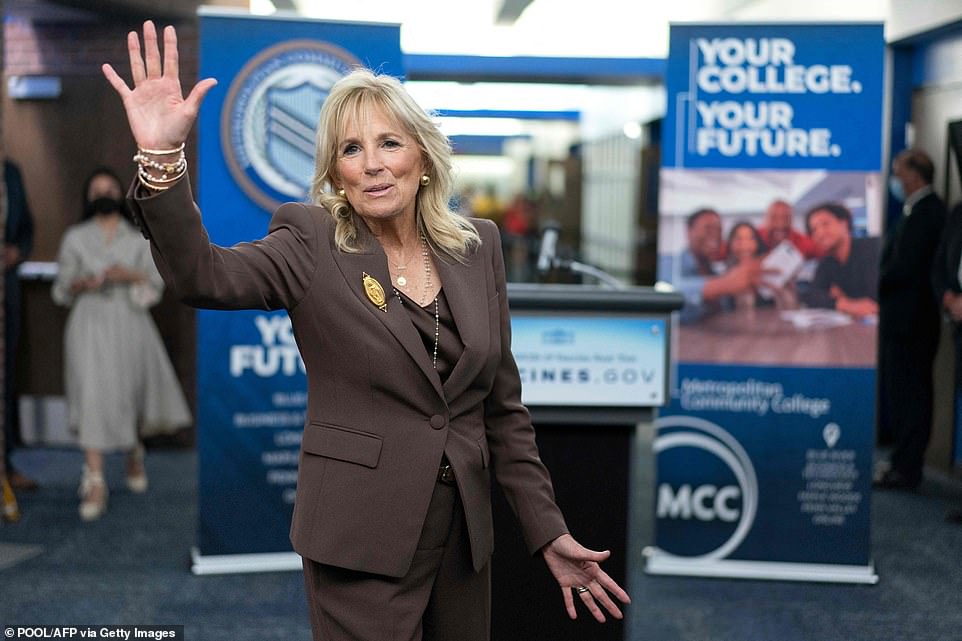 US First lady Jill Biden waves to media after touring a vaccine clinic at the Metropolitan Community College, in Kansas City, Missouri on May 27

He also issued a defense of his tax hike proposals, which will be put out in detail along with their economic impacts in his budget proposal Friday, but which have failed to win over any Republican support in the Senate.

Senate Republicans put out their latest offer of nearly $1 trillion in infrastructure spending, but won’t accept any of Biden’s proposed tax hikes. Instead, they want to take funds from previously enacted coronavirus and economic relief.

He referenced the Trump tax cuts of 2017, which Senate Republicans are rallying to preserve, and appeared to reference ongoing infrastructure negotiations with Republicans. 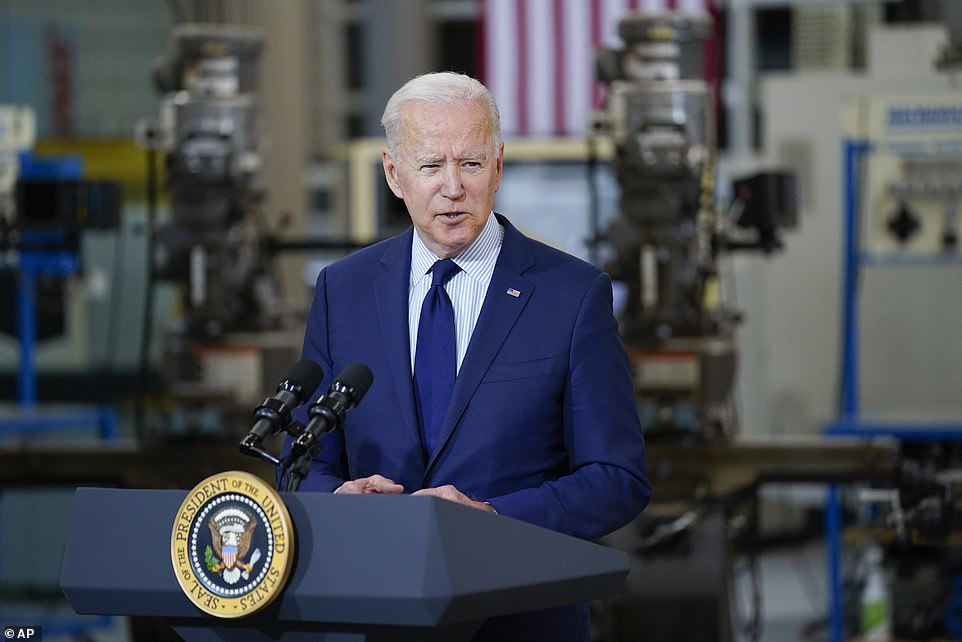 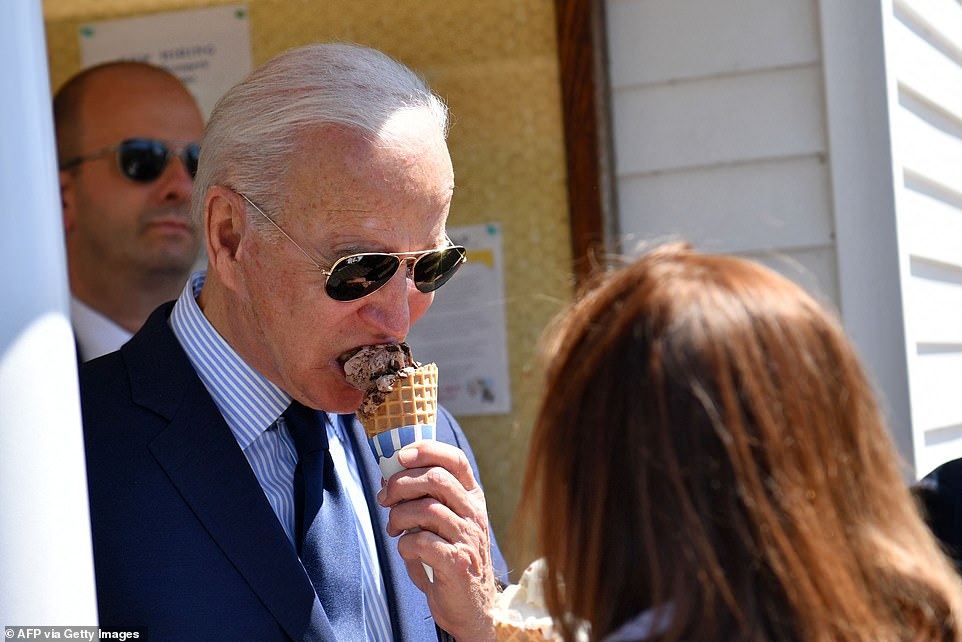 President Joe Biden eats an ice cream at Honey Hut Ice Cream in Cleveland, Ohio, on May 27, 2021 after touting his economic plans 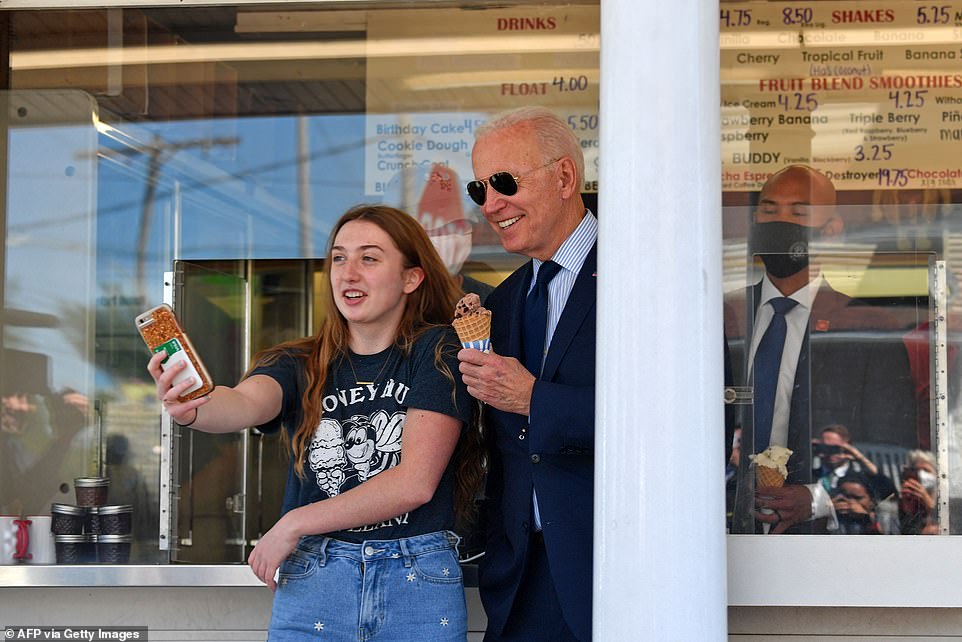 Biden posed for a selfie after getting ice cream 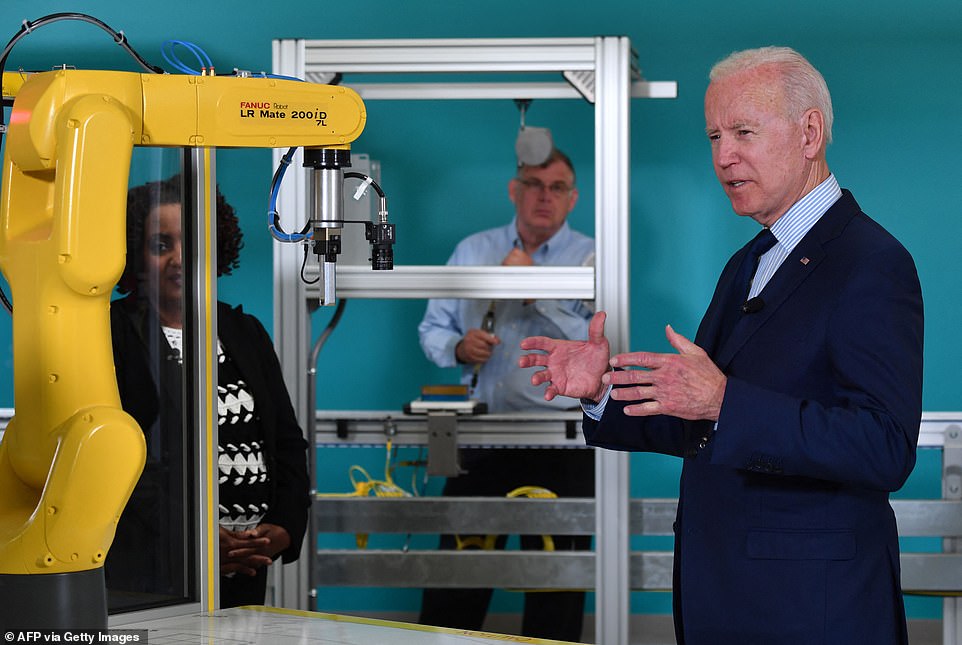 President Joe Biden (C) speaks during a tour of the Cuyahoga Community College Manufacturing Technology Center, on May 27, 2021, in Cleveland, Ohio 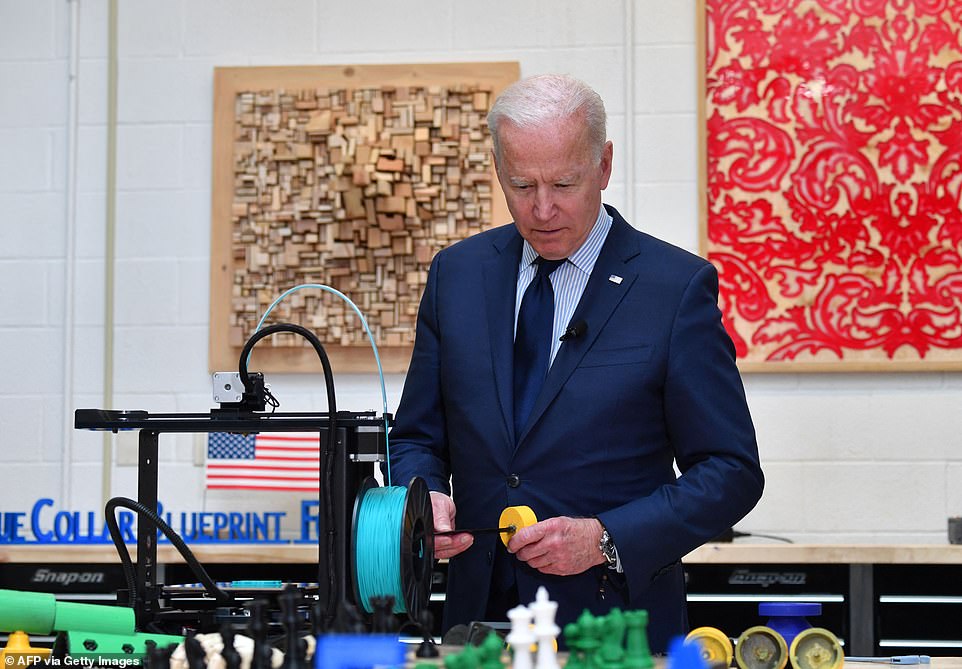 Biden looks at 3D printed obkects during a tour of the Cuyahoga Community College Manufacturing Technology Center, where he touted his tax hike plans 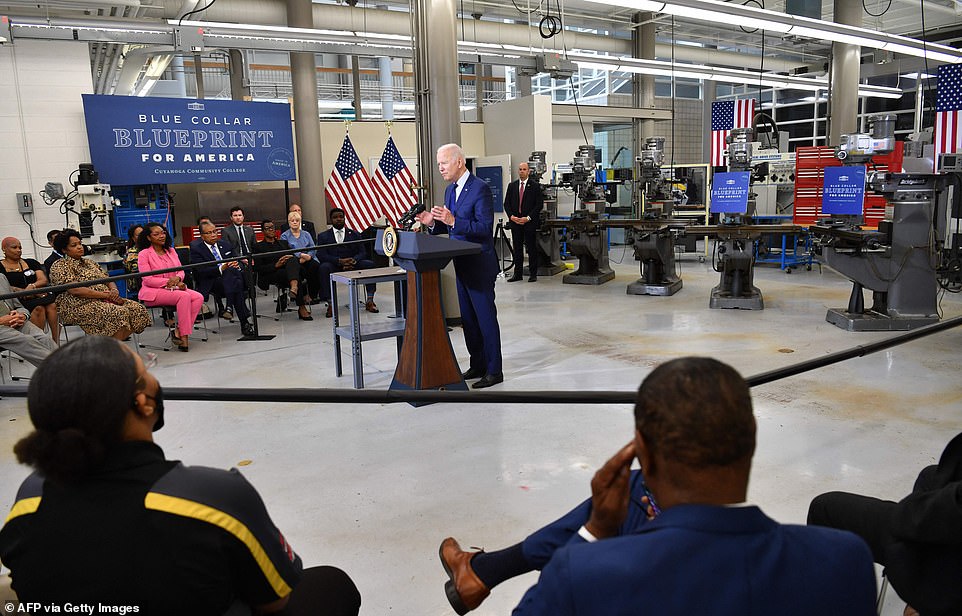 ‘No one should work 40 hours a week and live in poverty,’ Biden said

‘By the way, we had no problem passing a $2 trillion tax plan that went to the top 1 per cent that wasn’t paid for at all,’ Biden said.

‘Well,  we’re going to take back some of that 1 per cent money and make them pay for it,’ he vowed.

He also touted his plan to raise the corporate tax rate to 28 per cent, a proposal he has already offered to come down on. 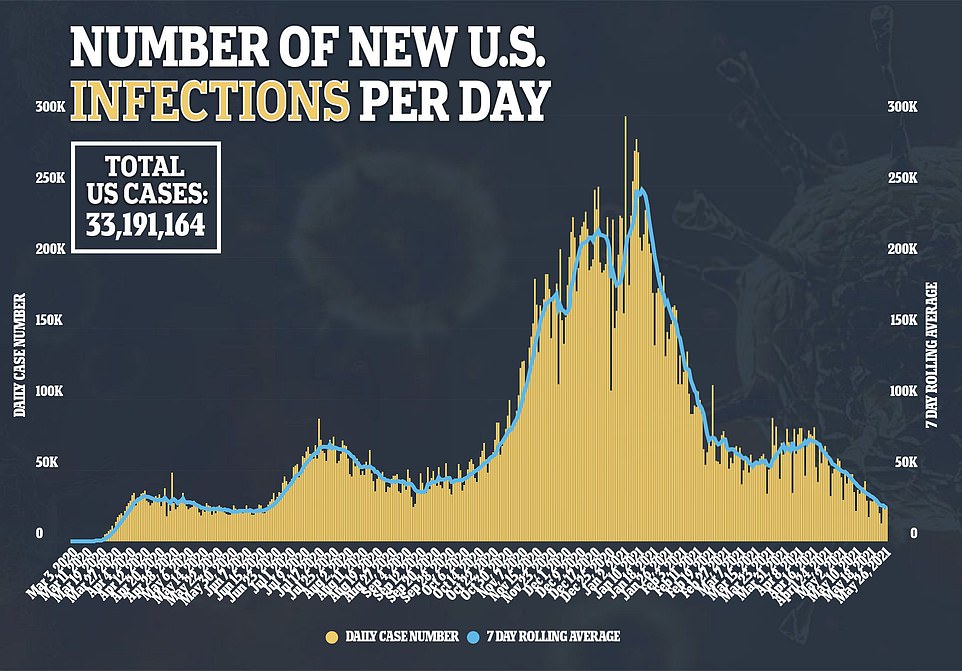 ‘That generates $90 billion additional revenue into the treasury for a year. That could put hundreds of thousands of people to work,’ he said.

He also touted a hike in the top individual income tax rate – ‘allowing every student in America to go to community college for free,’ he said.

‘I don’t begrudge them the money they made. Just start paying your fair share. Just a little bit,’ he said.

‘You want to give the wealthiest people in America another tax cut?’ he asked.

‘I don’t begrudge them the money they made. Just start paying your fair share. Just a little bit,’ he said.

He linked his economic plans to his COVID plan.

‘You’ve got to fix the pandemic before you can fix the economy,’ he said.

He once again pitched a $15 an hour federal minimum wage.

‘No one should work 40 hours a week and live in poverty,’ he said.

Biden spoke about the state of the nation last summer.

‘Ten months ago, we were in trouble. When I was sworn in, there were 10 million fewer jobs, a lot here in Ohio.

Biden also took on his ‘Republican friends’ in Congress who voted against his American Rescue Plan – but have not been shy about touting its benefits for small businesses in their districts.

‘I’m not going to embarrass any one of them, but I have here a list of how back in their districts they’re bragging about the rescue plan,’ he said, earning laughs from a crowd.

‘I mean, some people have no shame,’ he said with a guffaw. ‘But I’m happy. I’m happy they know that it benefitted their constituents.’

‘That’s okay with me. But if you’re going to try and take credit for what you’ve done, don’t get in the way of what we still need to do,’ he continued. ‘The bottom line is this: the Biden economic plan is working.’

His reluctance to share the information didn’t keep him from holding up the card, which a New York Times photographer captured in detail. It listed Mississippi Sen. Roger Wicker, House Minority Leader Kevin McCarthy, and new House GOP Conference Chair Elise Stefanik, among others.

It wasn’t all taxes, budgets, and slaps at his rivals for Biden. He went to a local ice cream stop, Honey Hut Ice Cream, to get a cone. He grinned for a selfie, and told reporters her ordered chocolate chocolate chip.