Hardline union chiefs are ready to spark a new summer of discontent with the first national rail strike in Britain for a generation that would cripple a network used by more than 4million passengers each day.

The UK’s 23 rail companies are embroiled in a row with the Government over who should fill the £7.5billion gap in their join pension scheme.

The Rail & Maritime Transport union’s general secretary Mick Cash has today accused both sides of ‘playing fast and loose’ with the rights of hundreds of thousands of workers.

And he revealed that the first national rail strike since 1994 is moving closer with more than 40,000 mainline rail staff set to be balloted.

More than 40,000 rail staff will be balloted ‘soon’ over whether to call the first national strike since 1994. A strike by South West Trains caused havoc ten days ago in London (pictured at Surbiton)

These men and women serve 4million passengers on the national rail network and 3million more on the London Tube each day.

Mr Cash said his union has said the ballot start date would be ‘soon’, with walkouts threatened from the end of August onwards.

The RMT union has written to Transport Secretary Chris Grayling, the industry’s regulator, all employers and the Rail Delivery Group making it clear that if there is a move to impose reductions in future pension benefits or significantly increase member contributions, the union will take the ‘necessary action’ to defend pensions.

Preparations for a national rail strike vote involving more than 40,000 workers are now being put in hand.

RMT general secretary Mick Cash said: ‘If it takes the first national rail strike in a generation to defend our members’ pensions, then so be it.

‘We will not tolerate a position where Chris Grayling and the train companies are playing fast and loose with rail pension rights and RMT members will not be left to pay the price for the collapsing chaos of the rail franchising system.

‘Any such attack will be met with a campaign of co-ordinated industrial action across the rail industry to defend pensions and in the absence of a satisfactory response from Government and the train operators, that is where we are now heading.’ 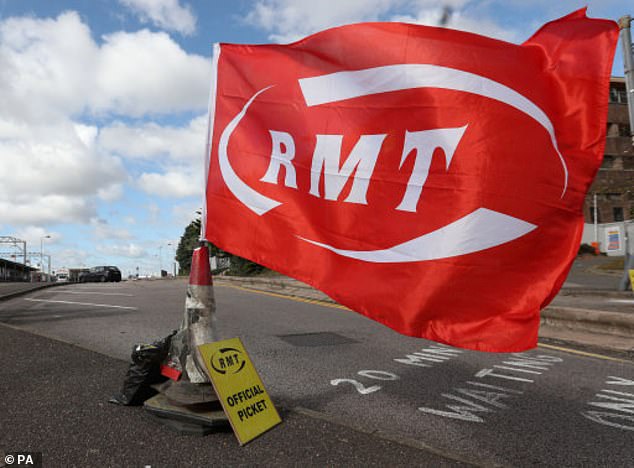 The threat of a national rail strike emerged in April Stagecoach was banned from bidding for three rail franchises because of pension rules.

A spokesman for the Rail Delivery Group said: ‘The last thing passengers or rail workers want is the misery of a strike. It would be premature in the extreme for RMT to begin hugely disruptive industrial action when conversations about how to address the pension deficit are still going on.

‘Having worked with unions, we have put forward to government a firm proposal to address this deficit in a way that is fair and sustainable for staff, taxpayers and operators, and we await government’s response.’

A Department for Transport spokesman said: ‘The threat of a deeply damaging national strike by the RMT underlines their total disregard for passengers.

‘Positive discussions are currently taking place between the pensions regulator, the Rail Delivery Group and the trustee to ensure the railway pension scheme is fair, affordable and continues to provide security for railway workers in retirement.

‘The absolute focus should be on agreeing a solution, not cynically inflicting misery on passengers.’