‘My first instinct was to whack his head’: Machete-wielding thugs mess with the wrong fish and chip shop owner as he fights them off with a bamboo stick and a BROOM

A fish and chip shop owner chased machete-wielding thugs from his store with a bamboo stick and a broom after they attempted to steal ‘cigarettes and money’.

Sothea Thea was behind the counter of the Wright’s Fish and Chips in The Basin, in Melbourne’s far east, when the duo stormed through the doors about 8.40pm on Wednesday.

The two men were dressed in black, with balaclavas covering their faces when they allegedly threatened the shopkeeper.

The father-of-three was ready for the attack, arming himself with a bamboo stick as a means of defence.

‘Two men came to the door and both had balaclava, demanding cash and cigarette,’ he told Daily Mail Australia.

‘I heard them screaming, demanding something, I wouldn’t reply. I just attack them.’

Mr Thea said he didn’t speak to the alleged thieves but automatically knew they were up to no good.

‘I knew their intention immediately, I just went in and used my stick and whacked them.’

In footage obtained by Seven News, Mr Thea was able to successfully chase out the duo in a short 19 seconds.

Mr Thea explained the stick was not in the store as a means of protection but he had  used it for a hike.

The footage shows Mr Thea whack the stick and throw it, before running through the store with another stick and a broom.

Sothea Thea was behind the counter of the Wright’s Fish and Chips in The Basin, east of Melbourne’s CBD, when the duo stormed through the doors about 8.40pm on Wednesday.

He said the men took off when he went to grab another stick.

‘I have no idea, when that thing happened, it was natural instinct. It just kicked in,’ Mr Thea said.

‘Something that you love, I guarantee you’d fight for. You would not run, you’d stand your ground.’

Mr Thea reported the altercation to police who he said arrived about half an hour later and took statements.

He said he is not scared about the likelihood of a similar attack and ‘would do the same thing as before’. 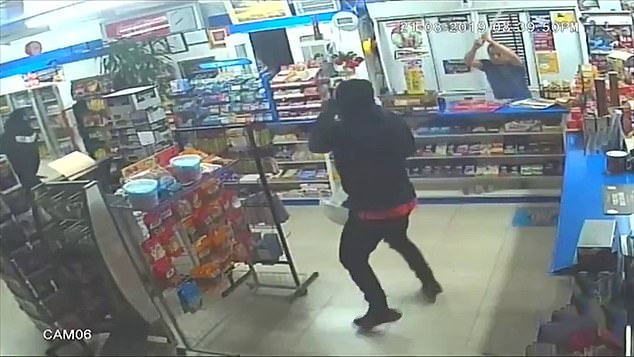 In footage obtained by Seven News , Mr Thea was able to successfully chase out the duo in a short 19 seconds