By James Callery For Mailonline

A missing fisherman who had fallen from his boat on Christmas Day off the coast of Brazil was discovered holding on to a signal buoy.

David Soares, 43, was saved by a fellow local fisherman two days after his fishing vessel had been found out in the Atlantic Ocean.

He told local media he had fallen from his boat and swam for four hours before he came across the buoy, which he was able to clamber on top of.

Mr Soares, known In the town’s fishing community as ‘Leandro’, had set off to fish on his own from Atafona beach, around 200 miles north east of Rio de Janeiro, when he slipped into the water.

David Soares (pictured) was interviewed after the incident. He was saved by a fellow local fisherman two days after his fishing vessel had been found out in the Atlantic Ocean

He told Brazil’s G1 news site: ‘For me, the first 10 minutes were the most difficult because I wanted to get to the boat at all costs. But it’s really an enormous weight of water, I couldn’t swim against it.’

After he realised he would not be able to board the boat again he stripped off his shirt and trousers, as they were too heavy, and let himself drift.

‘The water was choppy and it was windy… so I decided to let myself be carried along by the current in order to use less energy,’ he said.

After four hours, he arrived at a signal buoy close to the port of Açu and scaled it.

It was around five miles from where the incident took place, he told local outlet G1 Globo.

‘I thought I would die of cold before any help would arrive,’ he recalled. 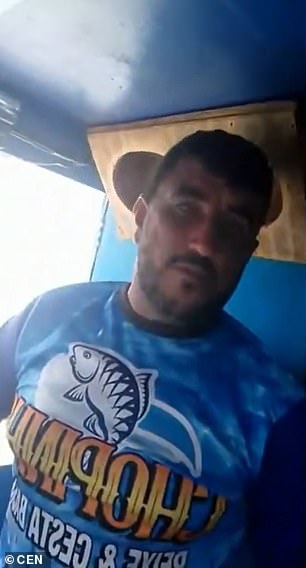 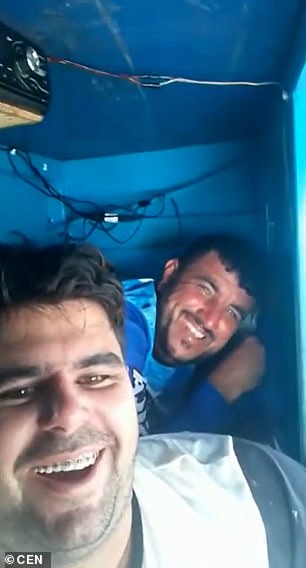 Pictured: Fisherman David Soares shortly after being rescued. He told journalist João Villa Real that he could not contain his emotions when he witnessed the reaction of those who located him. ‘They were all crying,’ he said.

One of his fellow fishermen, who had set out to look for him after his family raised the alarm, discovered him on Tuesday clinging to the signal buoy and brought him safely aboard.

His family had asked the local fishing community for help in searching for him after he had not returned from his Christmas Day voyage. They later contacted the Brazilian Navy for assistance.

In a video recorded on the way back, Mr Soares can be seen making light-hearted conversation.

He later told journalist João Villa Real that he could not contain his emotions when he witnessed the reaction of those who located him.

‘They were all crying,’ he said.

Mr Soares was treated for dehydration and returned to work a day after the rescue.

Reflecting on the incident, he said: ‘Certainly I had the second opportunity to face life with different eyes and to be a better man.’