Former Biggest Loser trainer Tiffiny Hall might be known for her rock-hard abs, but it was her mother who had women all over Australia saying they needed to ‘lift their game’ after Tiffiny uploaded a snap of her mum on Sunday.

The 64-year-old mother-of-three Jeanette Hall stunned social media with her ‘gorgeous’ looks and lean and toned body in her sixties.

When Tiffiny posted the photo of herself with her mum, thousands from all over the world said Jeanette is the ‘hottest 64-year-old in the world’ and ‘absolutely gorgeous’.

Tiffiny Hall might be known for her rock-hard abs, but it was her mother who had women all over Australia saying they needed to ‘lift their game’ after Tiffiny uploaded a snap (pictured) 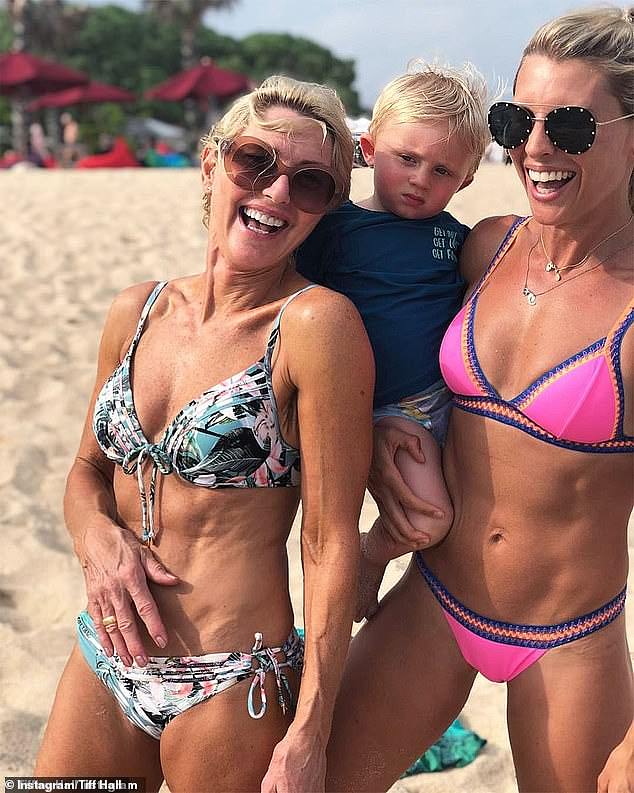 ‘Is that really your mother? You both look amazing,’ one commenter posted.

But while Jeanette’s body and face may look amazing, it doesn’t come without some hard work.

Speaking previously to FEMAIL, Jeanette shared exactly what she eats and how she trains to look so good in her sixties.

Jeanette has been a fitness and Taekwondo instructor her entire life, even training Tiff up to Black Belt standard. 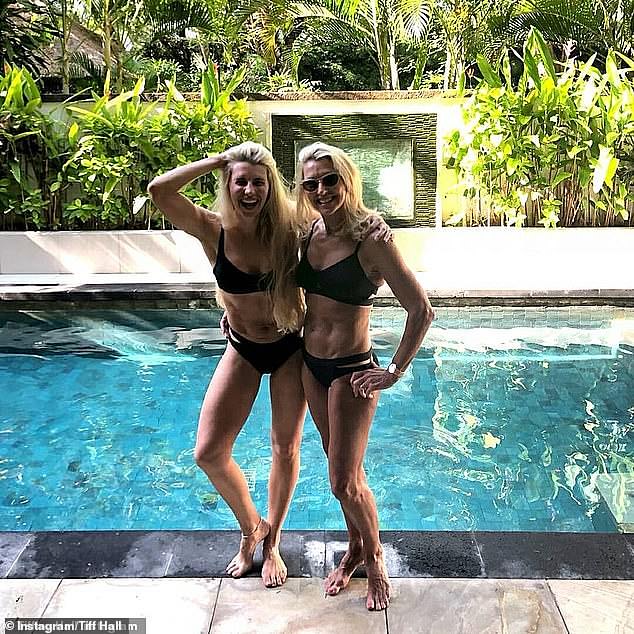 Jeanette explained that she begins each morning with an espresso and by oil pulling.

Oil pulling has been touted by countless health professionals as the solution to good oral hygiene and good breath, and it involves swishing coconut oil or other oil  around the mouth.

I follow my coffee with a TIFFXO workout, or I do some martial arts or go for a walk,’ she told FEMAIL.

‘Whatever I do, I train before 7am to get it out of the way.’ 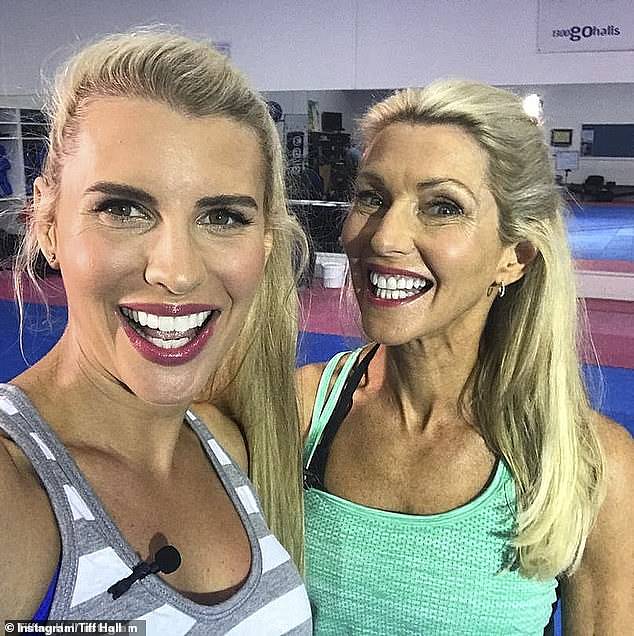 Jeanette (pictured with Tiff working out) shared her diet and fitness secrets, which include daily oil pulling and exercising every other day

What are Jeanette Hall’s diet and fitness tips? 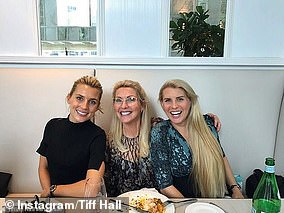 Jeanette (pictured with her daughter) concentrates on portion size, rather than restricting

* She doesn’t cut any foods from her diet – including dairy and carbohydrates.

* She focuses on managing her portions.

* She takes every second day off exercise to listen to her body.

* She trains before 7am to get it out of the way.

* She eats a little of what she loves. In her case, this might be licorice. 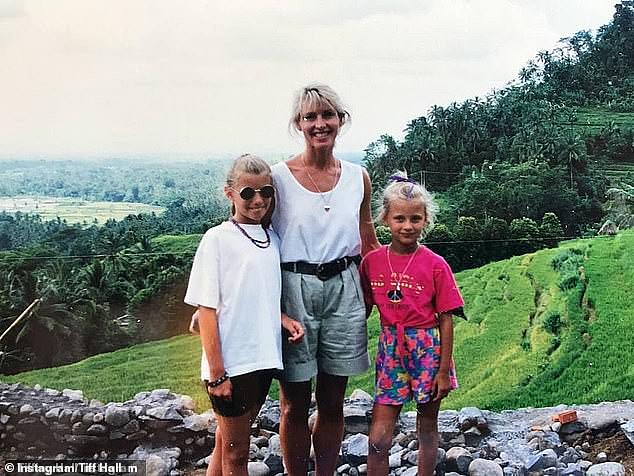 Jeanette (pictured with her daughters when they were children) has always been fit and healthy, and tries to get her exercise out of the way before 7am 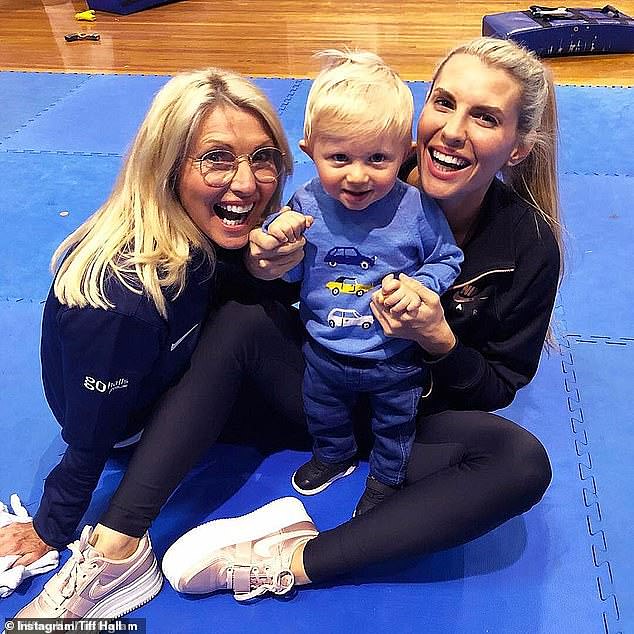 Jeanette (pictured with Tiffiny) said you absolutely must allow yourself a little of what you love; a typical dinner for her is fish and sweet potato chips with vegetables

What is Jeanette Hall’s day on a plate?

After 7am, the 64-year-old said she has breakfast, which is typically a homemade strawberries and cream smoothie.

Lunch is a carrot, bean, hummus and rocket wrap and the mum-of-three will always snack on some honey roasted sesame chickpeas or some fruit and licorice in the mid afternoon.

‘Dinner is something like fish and sweet potato chips followed by berries, Greek yoghurt and flaxseed oil,’ Jeanette said.

But the 64-year-old doesn’t deprive herself of anything she loves and said she hasn’t cut any foods from her diet.

Instead, she focuses on her portion sizes and if she has a blowout, she makes sure she rectifies it with exercise the next day. 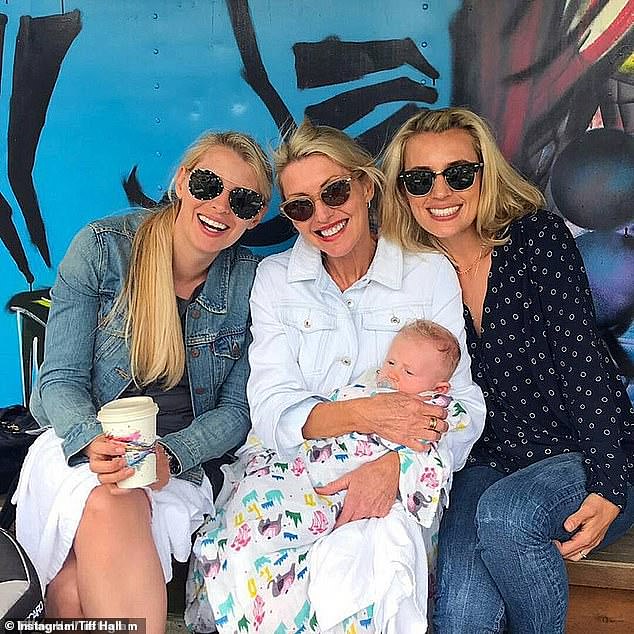 ‘My mum has a philosophy where she believes you should have every second day off – it suits her,’ Tiff said of Jeanette previously (the Halls pictured) 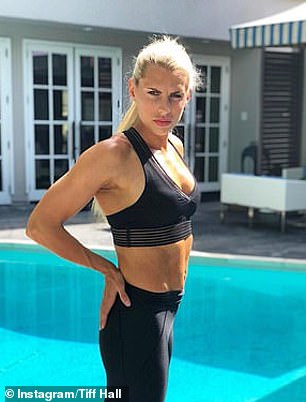 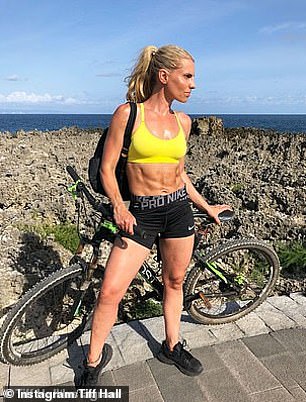 Tiffiny (pictured) works hard to keep her body in shape, targeting different areas of her physique each day in her workouts

‘My mum has a philosophy where she believes you should have every second day off – it suits her,’ Tiff said of Jeanette previously.

‘You do have to listen to your body. And you do have to fit it amongst a busier lifestyle; now that I’m a mum, exercising every day sometimes doesn’t happen for me.’

Jeanette is consistent with when she works out (before 7am) however, as she believes that if you set good habits, you will stick to them.