Five members of Antifa are in custody on domestic terrorism charges after they were protesting outside of a planned $90 million police training center.

The site of the planned center has been the focal point of protests for months by Antifa who have referred to the site – which protesters have made an autonomous zone – as Cop City. Many of those who were arrested were holed up in treehouses where police later recovered explosives.

Prior to Tuesday’s arrests, police detained several people at the site for crimes including destruction of property and arson along with car-jacking and attacks on locals and government officials.

The official reasoning for the protest, according to a report from the Atlanta Journal-Constitution, is environmental concern for the Weelaunee Forest. The center would cut out 381 acres of the woods.

Among the photos documenting the protest is an image of a group of ski mask-clad protesters standing over a truck with a banner reading: ‘No forest, no peace, truck the police’ as well as a smaller sign that read: ‘No Cop City.’

Those arrested have been named as Serena Hertel, 25, of California, Nicholas Olson, 25, of Nebraska, Francis Carroll, 22, of Maine, Arieon Robinson, 22, of Wisconsin and Leonardo Vioselle, 20, of Macon, Georgia.

Earlier this week, the GBI said that protesters had begun attacking police and other emergency services workers at the scene with rocks and bottles. After officers cleared the area, they recovered bombs, flares and gasoline, authorities said.

Multiple crimes occurred on Saturday when the local fire department was called to the scene to extinguish a dumpster fire. Richard Porter told WXIA that he was set upon by the group when he attempted to pick up some scrap metal from the area.

Porter said that members of the group threw things at him including a ‘gas bomb.’ He fled, leaving his truck behind which was burned out. Porter told the channel: ‘It seemed to me like they were going to burn the truck with me in it.’ 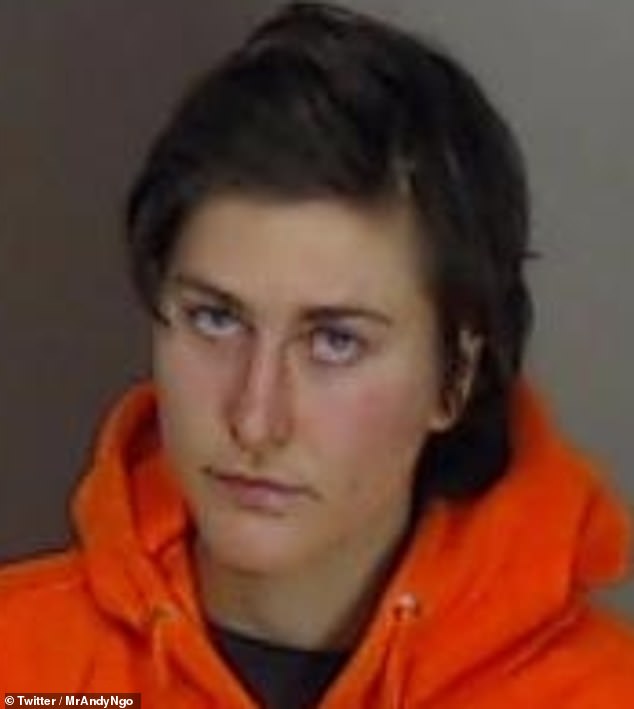 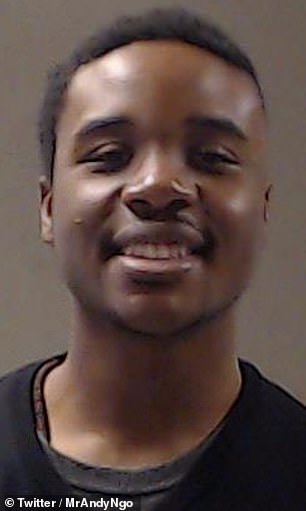 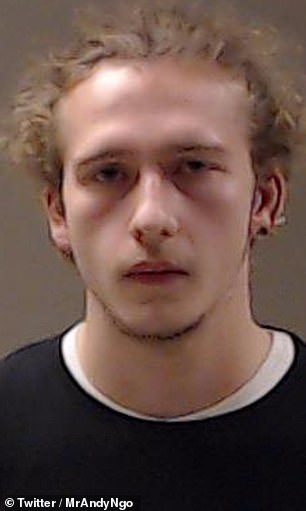 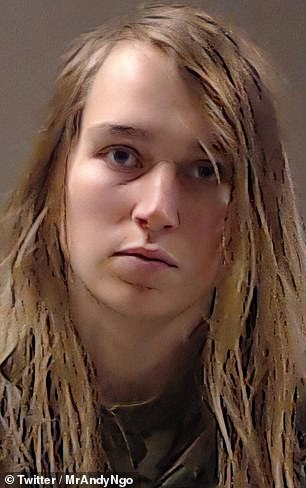 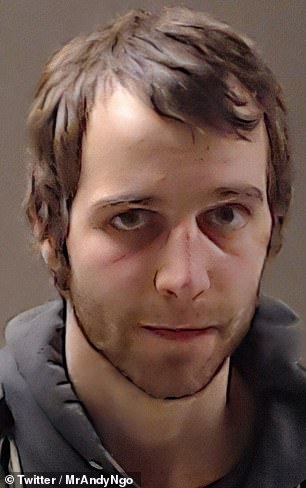 Vioselle is the only member of the group is from the area where the public safety center is being constructed. Authorities used used tear gas and pepper balls to clear the protesters from the scene.

On the day of the arrests, the Atlanta Community Press Collective wrote on Twitter: ‘Treesitters report that they are surrounded and being teargas’d by police.’

While a representative from a group supporting the protest, the Atlanta Solidarity Fund, told AJC that those arrested were ‘legitimate political protesters.’

Marlon Kautz continued: ‘There’s clear evidence to the contrary that the people they have been arresting and targeting and attacking have been engaged in nothing but peaceful civil disobedience.’

A representative from another group, the Community Movement Builder, told the newspaper: ‘I think there are forest defenders who will continue to defend the forest. That means civil disobedience, that means rallies, demonstrations. That means all the tactics that we can use.’

The group said that dozens of police officers and undercover cops descended on the scene. After the initial arrest, officers began ‘coming through the woods to clear anybody and everybody,’ a local official told AJC. 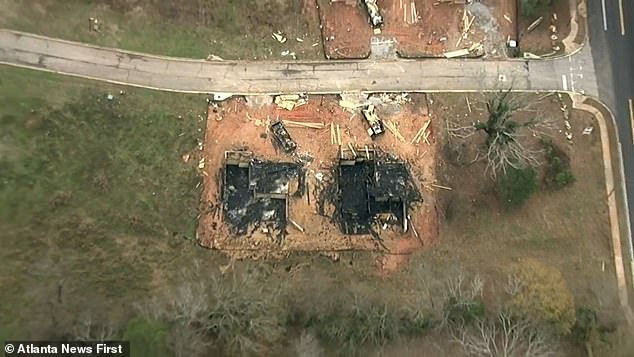 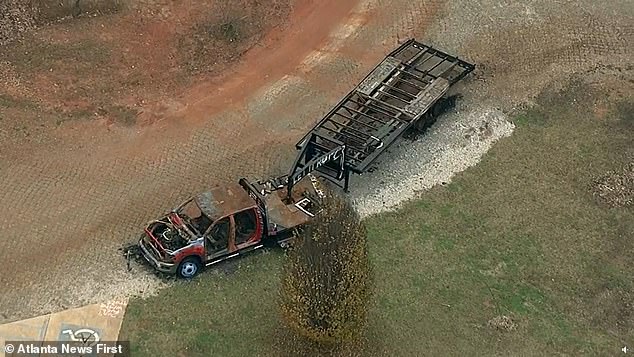 A burnt out truck at the scene of the protest, activists were arrested for arson among other crimes of the course of the confrontation 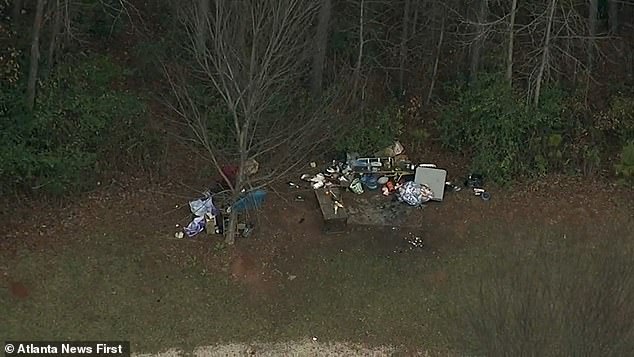 Trash is seen at the scene of the protest

Convictions of domestic terrorism carry with it sentences of anywhere between five and 35 years in prison. The group is being held at DeKalb County Jail.

DeKalb County District Attorney Sherry Boston said in a statement: ‘I strongly believe in the right to peacefully protest for what one believes is right and just. However, I draw the line at violence, destruction of property, and threatening and causing harm to others.’

She added: ‘My office will always stand up to protect the citizens of DeKalb County. The alleged acts of violence at the training facility site put the public in grave danger and will not be tolerated.’

In a tweet, Georgia’s Republican Governor Brian Kemp said: ‘We will not rest when it comes to bringing domestic terrorists to justice, and these arrests should serve as a strong reminder of that.’

In addition to the domestic terrorism charges, the group are accused of criminal trespass, interference with government property and aggravated assault.

Francis Carroll is facing the most charges in the case. He’s a resident of the affluent Maine town of Kennebunkport, where famously George H.W. Bush spent his summers following his presidency.

Hertel is a graduate of Pitzer College where she majored in environmental analysis and math in 2020. An online bio describes her interests as ‘public health and environmental justice, with a focus on prisons and water.

Opponents of the training center have been protesting for months by building platforms in surrounding trees and camping out at the site.

They say that the $90 million project, which would be built by the Atlanta Police Foundation, involves cutting down so many trees that it would be environmentally damaging. They also oppose investing so much money in what they call ‘Cop City,’ which they say will be used to practice ‘urban warfare.’

The 85-acre)property is owned by the city of Atlanta but is located just outside the city limits in unincorporated DeKalb County, and includes a former state prison farm.

Just as an attempt was made to remove barricades blocking entrances to the site, firefighters and police officers were attacked with rocks and incendiary weapons, Boston said. Once the area was cleared, police found explosive devices, gasoline and road flairs, the GBI said.

In an email to news outlets, opponents of the training facility said that police used ‘extreme and unjustified measures’ against them, including ‘tear gas canisters and pepper bullets.’

The Atlanta City Council voted in September 2021 to lease the land to the Atlanta Police Foundation.

The training center would include a shooting range, classrooms, a mock village, an emergency vehicle driving course, stables for police horses, and a ‘burn building’ for firefighters to practice putting out fires. The vote came after weeks of protest from people who oppose the complex.