There have been some incredible prices paid at British motor auctions for vintage, modern-classic and all-round collectible cars in the last 12 months.

However, there are some that have completely obliterated their auction estimates, average values and pre-sale predictions cast by experts.

Hagerty UK, the classic car insurance specialist that constantly tracks collectible vehicle valuations, has exclusively revealed to This is Money the five sales of 2022 that caught everyone by surprise…including themselves.

A Japanese eighties icon: The Toyota AE86 is one of a few cars referred to by its factory codename rather than the model moniker it was given, such is its reputation 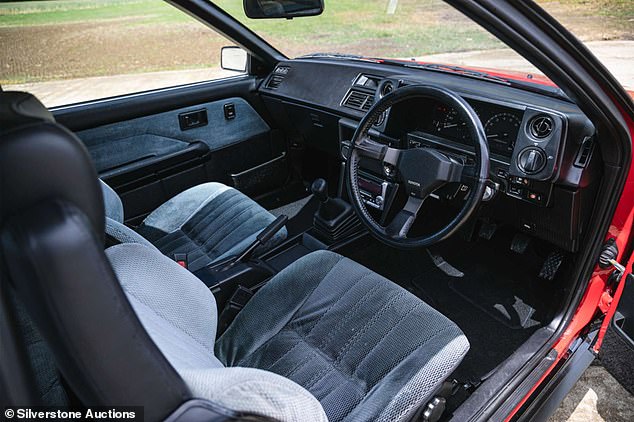 This sublime example sold by Silverstone Auctions in the summer set a new world record for the model, with a collector paying over £50,000 for it

The Japanese halo car of a generation is one of few cars referred to by its factory code name (AE86) over the general model moniker (Corolla).

It rose to fame thanks to its combination of rear-wheel drive and a free-revving 1.6-litre petrol engine producing 122bhp, which made the AE86 a legend among drift-car fanatics.

Hagerty says the sale of this particular example of the Toyota icon caught it by surprise back in July, mostly because the AE86 has been criminally overlooked for years.

‘The Corolla AE86 has been one of those cars that has slipped under the radar, quickly increasing in value within a very select group of enthusiasts,’ Hagerty’s valuations guru John Mayhead tells us.

Hagerty has tracked examples being advertised for around £37,000 in the last year, so when Silverstone Auctions dropped the hammer at over £50,000 for this 1987 car, it set a few tongues wagging.

Not least because it isn’t entirely original or particularly low mileage.

It has covered over 55,000 miles from new, which is relatively little for a 35-year-old car but still not considered ‘low’ by concours-worthy collectible motors. And it has recently been subject to a £20,000 restoration.

The auction house believes the £50,625 paid by the winning bidder is a new public auction world record for the model.

Hagerty says any further meticulously-maintained examples with low mileage – or that have been fastidiously restored – should continue to grow in popularity throughout 2023 and beyond. 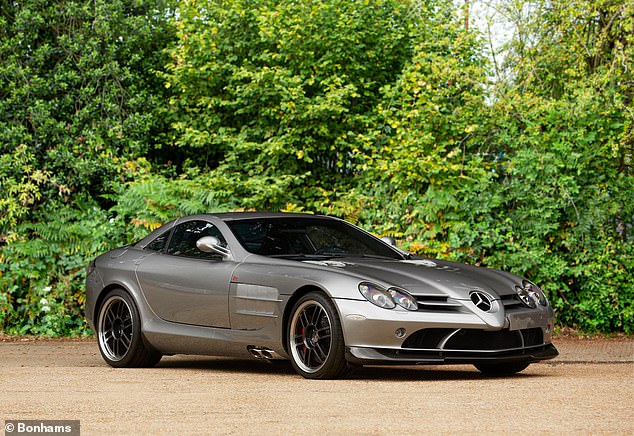 John Mayhead, Hagerty’s classic car valuations specialist, said he knew this 2009 Mercedes-McLaren SLR would obliterate its pre-sale estimate when he saw it in the flesh at the Bonhams auction 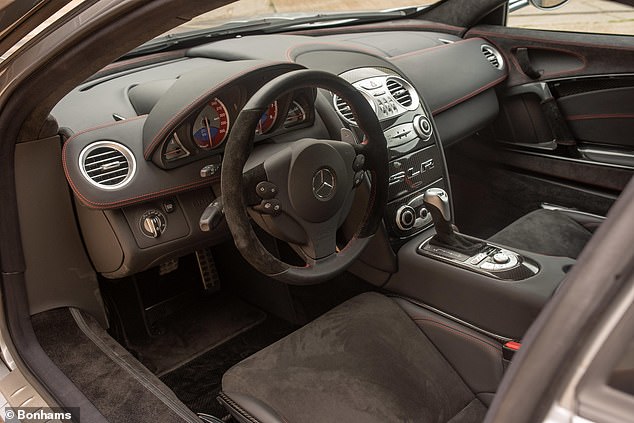 The winning bid for this Mercedes-Benz SLR McLaren supercar was just over £675,000 – that’s almost three times its lower estimate

When a car sells at auction for almost three times its lower estimate, it will always draw some attention.

And this Mercedes-McLaren modern classic supercar was a prime example of this when it set the auction room into a bidding frenzy in September and the eventual lot winner handing over an amount of just over £678,000.

Mercedes-Benz and the British Formula One firm combined forces early in the 2000s to create a usable supercar. It is powered by a 5.5-litre supercharged German V8 producing 626bhp, which saw it hit 60mph from a standstill in a mere 3.8 seconds and hit a top speed of 206mph.

A few special versions were created – like the one sold earlier this year.

The ‘722’ edition model is a nod to the 1955 Mille Miglia victory of Stirling Moss and his co-driver Denis Jenkinson, whose Mercedes-Benz 300 SLR had the starting number 722, which indicated their start time of 7:22am.

John, who attended the Bonhams auction in person, says he had a feeling this would far exceed the guide price.

He told us: ‘I knew this was a very special car the moment I saw it in the auction tent during the Goodwood revival.

‘One of just 150 produced, with just 50 miles from new and a superb colour combination of metallic green over fawn leather seats and a maroon hood, I knew that the Bonhams estimate of £240,000 was extremely low.’

The company has been tracking the values of the Mercedes-Benz McLaren SLRs – especially limited edition examples like this one – and seen them soar over the last 18 months.

However, it conceded that the hammer price of this one in particular had surprised everyone – and says it could be a ‘significant turning point’ for this model. 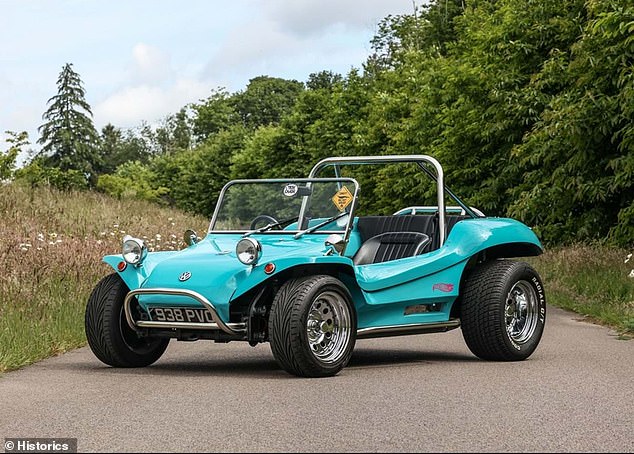 This VW beach buggy was estimated to sell at a Historics auction in July for around £18,000…but the winning bid was more than twice that 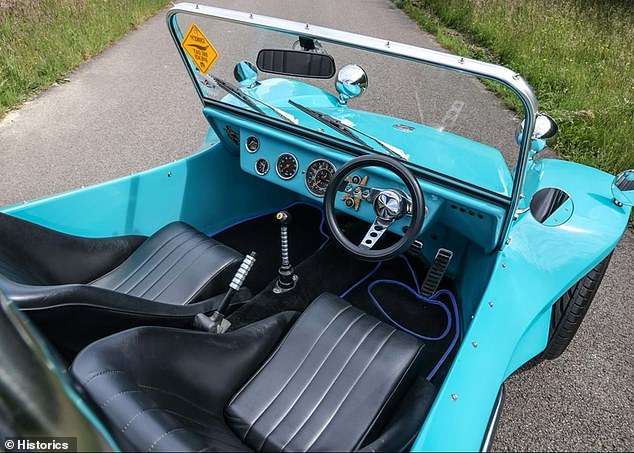 This 1970 example, finished in ocean blue coachwork, has an uprated 1584cc engine and had covered a mere 7,981 miles before it went to the block in the summer

There are some car auction lots that are clearly totally impractical for the UK, but the vehicle itself is in such incredible condition and beautifully presented that it deserves to eclipse the pre-sale estimate.

This is what happened with this 1970 VW buggy, which sparked frantic bidding during a Historics event back in July.

Converting VW Beetles into buggies was big in the sixties US surf culture, with Meyers Manx becoming the specialist for adapting the cars into doorless machines.

They were made famous by their appearances in several movies, including Elvis Presley films and the 1968 The Thomas Crown Affair, which contains a lengthy beach driving scene in which Steve McQueen drives a Manx with Faye Dunaway at his side.

This 1970 example, finished in ocean blue coachwork, has an uprated 1584cc engine and had covered a mere 7,981 miles before it went to the block in the summer.

It quickly eclipsed the lower estimate of £18,000 and continued to climb almost to £50,000 by the time the winning bidder went unchallenged.

The catalogue described it as ‘arguably the best beach buggy we have ever seen’ and the chrome, colour and history file supported that.

Yet, Hagerty says this will likely be a one-off case in the UK.

The classic car valuations expert certainly is not predicting huge demand for dune-riding buggies at auctions, even if this one broke the mould. 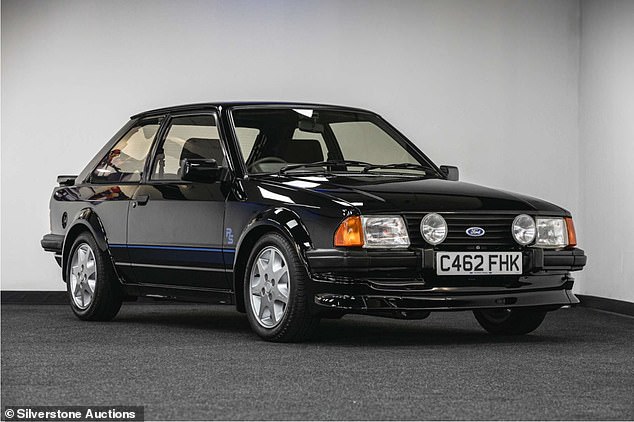 Look familiar? This car should. It hit headlines in August when it sold for over £720,000. Why? Because it was famously owned and driven by Princess Diana 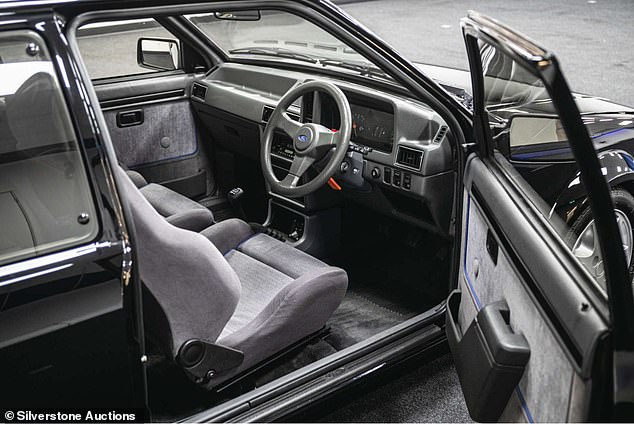 When it comes to cars formerly owned by Royalty going to the block, it’s almost impossible to guess what it might sell for.

This was especially the case in the summer when Princess Diana’s one-of-a-kind 1985 Ford Escort RS Turbo entered the auction room at Silverstone Auctions’ event.

The car is believed to be unique as the first and only black RS Turbo Series 1.

Ford’s Special Vehicle Engineering department was tasked to paint the car and fitted a regular five-slat front grille for a ‘stealth makeover’ to evade paparazzi – and it even had a secondary rear view mirror for the protection officer with a radio in the glove box – the cable for which is still visible today.

Even with only 25,000 miles on the clock from new and having been ‘detailing to a concours standard’, the winning bid of £722,500 was something else.

The 2022 Hagerty Power List calculated that, on average, Princess Diana’s ownership of a car would make it worth around 813 per cent of its standard value, which in this case would be £280,485.

‘Will this affect other Escort values? Almost certainly not,’ explains John.

‘Will this affect the values of other cars owned by Diana? Hagerty would be amazed if it didn’t. I expect her to rise up the ranking on the 2023 Power List,’ he adds. 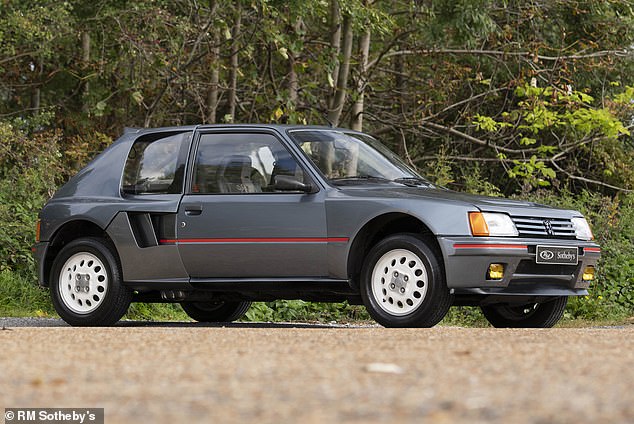 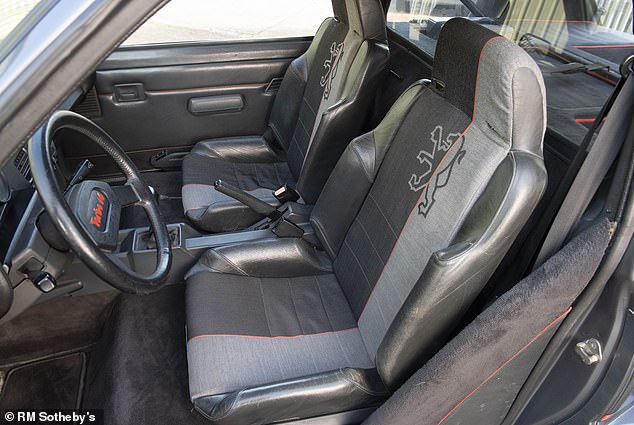 While the car didn’t sell during the RM Sotheby’s sale in November, the auction house confirms it was sold shortly after for close to the reserve price. Which will be close to the £180k lower estimate

RM Sotheby’s London sale garnered plenty of coverage in November mainly because of the inclusion of the Gran Turismo Collection of supercars that included the full Ferrari ‘halo’ set of F40, F50, 288 GTO, LaFerrari and Enzo.

The Turbo 16 is the road-legal car Peugeot had to make in order to enter the 205 into Group B rallying in the era – which is still considered the most ferocious racing category in recent memory.

It featured its original 1.8-litre turbocharged four-cylinder engine, which is mounted in the middle where the rear seats would normally be located and sending power to all four wheels.

For a car that had 40,000km (just under £25,000 miles) on the clock from new and with limited history before 2004, the guide price was at the top end of what Hagerty says this model is worth – let alone one described in the catalogue as ‘well-travelled’.

Not unexpectedly, it didn’t find a buyer in the auction room.

However, it did after the auction.

And the undisclosed sum paid – Hagerty has been assured – is well within the area of the reserve price – around the £150,000 mark as a minimum.

That puts it way over where Hagerty would value it given its ‘good’ condition, around £127,000.

Why is this interesting? It might just draw more attention to other performance Peugeot 205 models, especially GTi and CTi, which Hagerty feels are undervalued compared to their peer ‘Fast Ford’ competition.