It’s easy to make mistakes when buying and selling homes, according to industry experts.

Data shows that almost half of all sales fell through before completion in the final three months of 2018.

The problem was highlighted recently in a report by NAEA Propertymark focusing on reasons for this trend.

Below, they highlight the five major setbacks that prevent deals from going through and some of the blunders people make in choosing homes which results in them later regretting their purchase decisions.

Property nightmare: One in five compromise on their preferred area – hating the choice later

Boundary and shared access to driveway disputes or anti-social noise can all result in arguments and fall outs with the neighbours and adversely affect the sale of a property.

If you don’t get on with your neighbour it’s not something you can hide though. You are legally obliged to disclose information about any arguments you’ve had on the ‘Seller’s Property Information Form’ provided by their solicitor.

Omitting or providing false information could lead to legal action taken against you by the buyers.

If your home has any serious structural defects which aren’t visible on first inspection, this can put serious doubt in the minds of buyers.

For example, if the survey finds there’s something wrong with the foundations, they may wonder about safety and be hesitant to make an offer for fear of their mortgage provider rejecting their application.

Structural problems are, however, what 13 per cent of people compromise on according to the Which? Survey, but 30 per cent regret this decision later on (see below).

Tips when looking for a new home

Focus on what you want: Use a house viewing checklist as a reminder of the issues that matter the most to you to help keep you on track. You can download one free of charge here.

Try to keep your emotions in check: Do not let excitement make you overlook any problems or make allowances over matters that are important to you.

Consider the future: Things like changing jobs or starting a family could all make you regret your choice of home. Ask yourself if the property you are buying will support your future plans.

Keep location top of mind: The area may not be ideal now but regeneration projects could transform an area in a few years, meaning an initial compromise may pay off in the long run.

Compare your options: Consider your options together, creating a list of pros and cons to help assess what the best decision is for you.

If you’re aware of a major structural problem with your property, try and fix it before putting it on the market.

If you don’t have the money, get an appropriate contractor to give you an estimate for repair and be transparent about it with potential purchasers.

Doing this leg work, could eliminate any concerns the buyer may have.

Knotweed is commonly found during site inspections and can cause major problems.

The plant can grow up to nine feet in height and roots up to three metres deep.

Hire a professional to deal with this invasive plant to prevent the property sale from falling through and before it causes any major damage to your homes’ structure or foundations.

Properties in commuter towns can fetch high prices, but changes to train timetables result in travel mayhem it could negatively impact the saleability of your property.

Keep abreast of any timetable changes and find out when these will iron themselves out before putting your property on the market.

Buying a property without planning permission is a huge risk.

If you’ve had any work carried out while you’ve been living in the property, such as extensions or conversions, make sure you obtained appropriate planning permission in accordance with building regulations, and have access to these documents.

If you haven’t got the right documents, you may find that you must pay for them retrospectively before agreeing a sale. 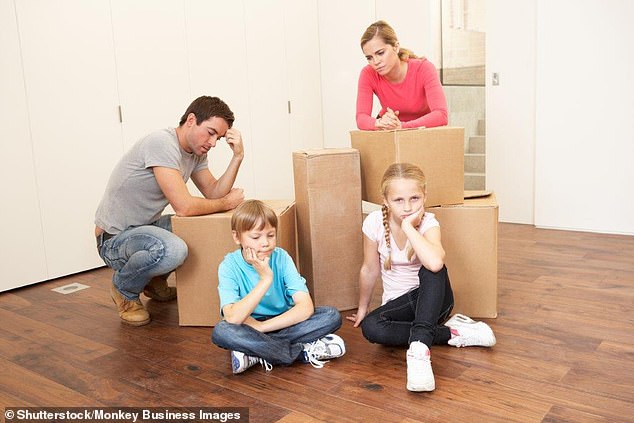 Bad choice: Families with children are particularly likely to feel remorse over compromising on location

Five most common regrets after buying…

When it comes to purchasing a property, many may not be able to tick all the boxes on the wishlist, so many settle on what fits close to what they believe is an ideal abode.

While compromising may seem a noble thing to do, it’s often this exact action that typically leaves home buyers regretting their decision.

Settling on key factors such as location, price and structural integrity are some of the worst mistakes property buyers can make, according to a survey by Which? Mortgage Advisors.

David Blake, principal mortgage adviser at Which? Mortgage Advisers, said: ‘Buying a home is a very emotive purchase. In an ideal world, we would be able to find our dream home in a great location, ticking everything off our list – but for most of us, some compromise is to be expected.

‘But that doesn’t mean you have to settle for somewhere that will leave you unhappy.’

While there’s a Channel Four show dedicated to the importance of a property’s location and most industry experts agree that choosing the area to live in is crucial, many buyers fail to follow this sage advice – only to regret it later.

Which? Mortgage Advisors has found that one in five had compromised on their preferred area and that a quarter of home-owners who settled on location when buying their current property say they now regret it.

Families with children were particularly likely to feel remorse over compromising on location, with 38 per cent of those who had chosen a different location now ruing their decisions.

Nearly one in five of those who paid more than they had planned now wish they had not.

But many make this mistake with researchers finding that 26 per cent of respondents surveyed compromised on price.

The size of the rooms (20 per cent) and the garden (17 per cent) were also factors people had often made compromises on when buying their home.

People who compromised on their garden were more likely to regret it, with 26 per cent of those who did so now kicking themselves.

The structural condition of the property was also something people were particularly likely to regret making compromises on.

One in seven had made compromises on the structure of the property when they bought their home – and three in 10 regretted it.

Decor was also something that 23 per cent settled on but with far fewer (only five per cent) ruing their decision.

Which? Mortgage Advisors found that too many people make snap decisions and don’t take time to look at more options.

One in 10 people surveyed admitted to only viewing just one more property before settling on a home choice. Nearly three quarters (72 per cent) viewed fewer than 10 homes.

Which? Mortgage Advisors surveyed 1,200 home-owners who had bought their property within the past two years.