Five dead after shooting at car wash in Pennsylvania

By Associated Press and Forrest Hanson For Dailymail.com

At least five people were killed in a shooting at a car wash in rural Pennsylvania, state police say.

The shooting occurred around 2.45am Sunday at Ed’s Car Wash in Melcroft, Fayette County, WPXI-TV reports. Melcroft is about 55 miles southeast of Pittsburgh.

Three men and two women are dead after a shooting at Ed’s Car Wash in Melcroft, Pennsylvania at around 2.45am Sunday. One person is in a hospital 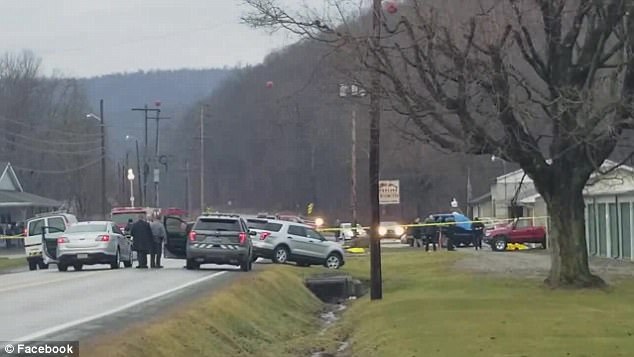 Local media report that the shooter was a man, was shot during the shooting and wore body armor during it. The shooter also used a semi-automatic rifle, sources say

At least one other person was wounded and was taken to a hospital, but further details on that person’s condition were not immediately released.

Authorities were trying to determine if the shooter was among those found at the scene.

The Pittsburgh Post-Gazette reports that the shooter was a man, was shot during the shooting and wore body armor.

Four of the fatalities were pronounced dead at the scene, police told the Pittsburgh Post-Gazette. One died at a hospital.

Two of the deceased were found inside a pick-up truck, police said.

Also on the scene were another pick-up truck and a sedan.

A motive for the shooting remains under investigation.

Police said in a statement that there is ‘no threat to the community, no imminent danger’.

One of the vehicles being towed away from a deadly shooting in Melcroft, Fayette County. 5 people (3 men, 2 women) are dead, one is in the hospital. pic.twitter.com/yZrWR8eI5M