Twin sisters born in November have still never been able to go home because they are too weak to have vital heart surgery.

Natasha and Hermione Sutcliffe, from Dundee, were both born with holes in their hearts because of a genetic condition.

They need open-heart operations to repair the defects, which can lead to deadly heart failure or infection if left untreated.

But the twins, who were born weighing only around five pounds (2.2kg) each, are not yet healthy enough to have the major surgery – they’ve had two ops cancelled already.

Parents Matthew, 30, and Gemma, 32, say they struggle to be together with the children who are 80 miles (128km) away from home at a hospital in Glasgow, while looking after their four other children.

Natasha and Hermione Sutcliffe, pictured with their father, Matthew, haven’t been able to leave hospital since they were born because they need surgery to repair holes in their hearts

‘We just don’t know if they will ever come home,’ Mr Sutcliffe said.

‘When they were born the doctors were not shocked with their conditions because of the previous scans they had done.’

Mr Sutcliffe’s family has a history of heart problems so the couple knew there was a risk of complications, but the girls’ health is worse than they feared.

He is staying in Glasgow to be with the twins, but Mrs Sutcliffe is at home in Dundee looking after Jessica, 11, Joshua, 10, Simon, six, and five-year-old Kimberly.

‘Since they have arrived in Glasgow, the children have seen them about two times, and Gemma has only seen them once or twice.

‘It’s a shame because I get to see them every day.

‘We really want them to get the surgery but it’s not about the size of them, it more about how strong they are, so hopefully they don’t pick up other infections.

‘The next operation will be the open heart surgery and doctors plan to do that in the next three to six months but it all depends on their health.’

The twins’ heart defect, known as a ventricular septal defect, occurs when there is a hole in the wall between the two lower chambers of the heart – the ventricles. 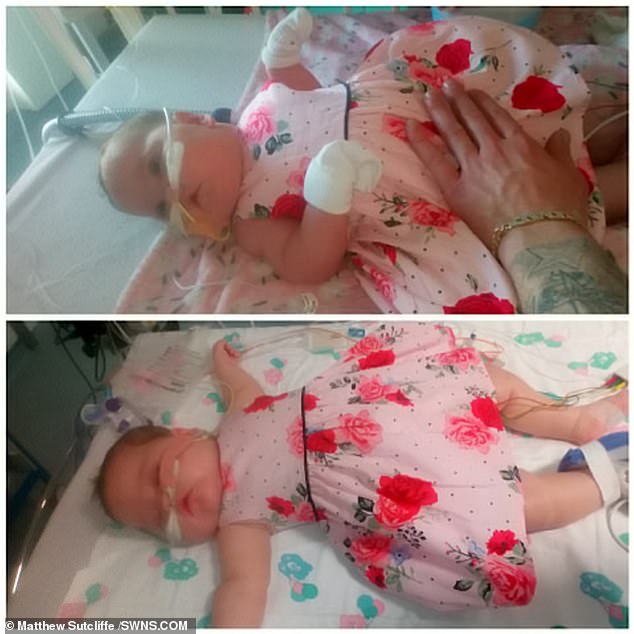 Natasha and Hermione are currently living in hospital in Glasgow, around 80 miles away from their home in Dundee, where mother, Gemma, must stay to look after her four other children 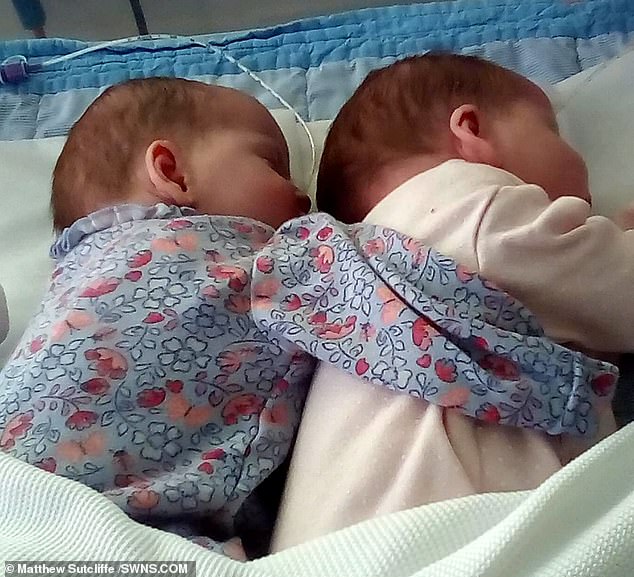 Natasha and Hermione have had the holes in their hearts temporarily patched up in a bid to improve their health, but they still aren’t well enough to go home 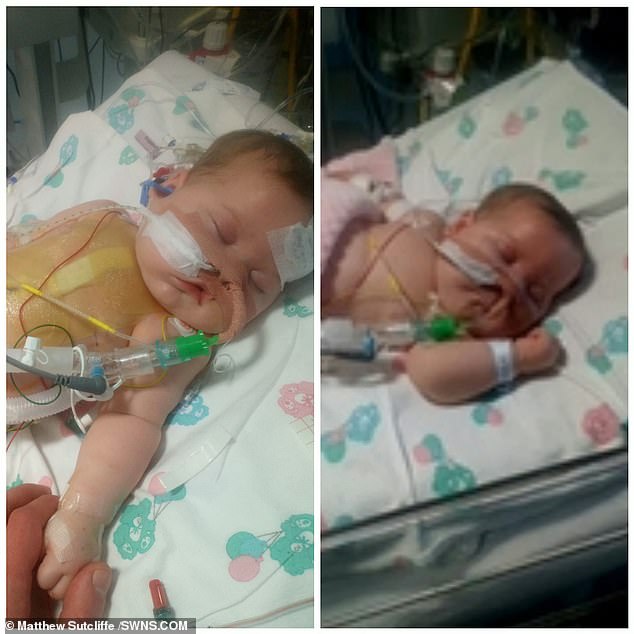 The twins have a condition called a ventricular septal defect which means the two lower chambers of their hearts leak into one another, creating extra work for the lungs

This causes blood to leak between the two sides of the heart, which are supposed to be separated into blood with oxygen and blood without.

WHAT IS A VENTRICULAR SEPTAL DEFECT?

A ventricular septal defect occurs when there is a hole in the wall between the two lower chambers of the heart – the ventricles.

This causes blood to leak between the two sides of the heart, which are supposed to be separated into blood with oxygen and blood without.

Leakage like this means more blood is pumped into the lungs, forcing them and the heart to work harder, increasing the risk of potentially life-threatening complications.

These can include heart failure, infection of the heart (endocarditis), high blood pressure in the lungs, stroke, or an irregular heartbeat.

The defect can be repaired by surgeons through open-heart surgery  or patched up temporarily – most children who have the surgery go on to live healthy lives.

Around one in every 240 babies develop a ventricular septal defect, which happen while the heart is developing in the womb.

Leakage like this means more blood is pumped into the lungs, forcing them and the heart to work harder, increasing the risk of potentially life-threatening complications.

The defect can be repaired by surgeons but open-heart surgery is taxing on the body and the twins must become strong and healthy before it can be done.

Mrs Sutcliffe said: ‘When I was pregnant, we were told that they could have heart problems – Matthew’s side of the family had a history of heart problems too.

‘They were getting monitored every fortnight so we were prepared for them to come out with heart problems.

‘They kept them in the hospital when they discovered they had holes in their hearts. They were then moved into intensive care.’

Both of the twins have had a temporary procedure to patch the holes in a bid to improve their health.

The pair were recently well enough to be taken off life support and be moved onto an inpatient ward together.

But for now both girls, who weighed 5Ibs 4oz (Natasha) and 5lbs 3oz (Hermione) at birth, must remain under the care of doctors.

Mr Sutcliffe has been staying at Ronald McDonald House Glasgow, and visits the babies every day.

‘It’s so hard for us just now and especially for Gemma,’ he said. 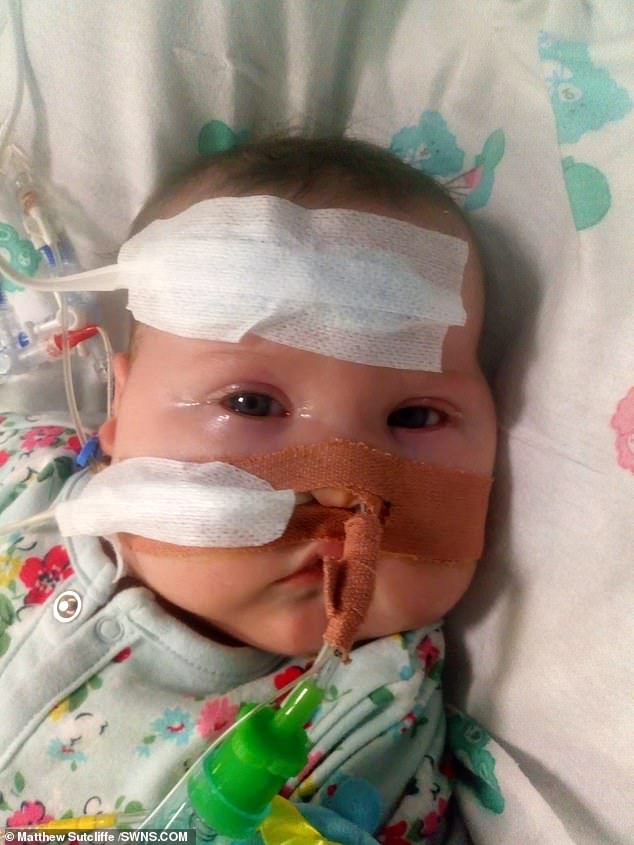 Hermione, pictured in hospital in Glasgow, was the first of the two sisters to be well enough to come out of intensive care 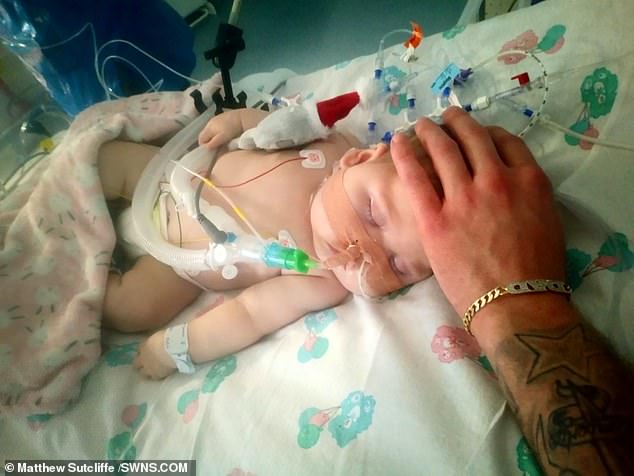 Natasha, pictured in Glasgow in intensive care, recently grew strong enough to join her sister on a normal inpatient ward 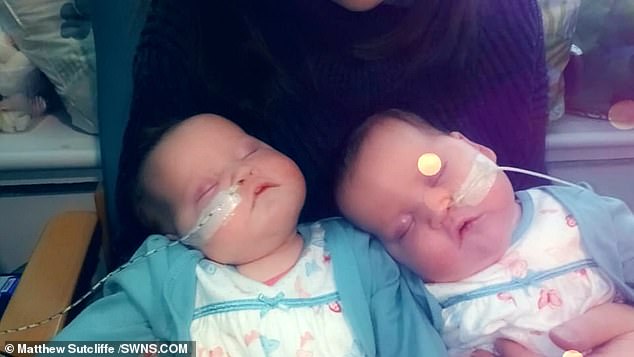 Both girls, who weighed 5Ibs 4oz (Natasha, right) and 5lbs 3oz (Hermione, left) at birth, must remain under the care of doctors for the forseeable future 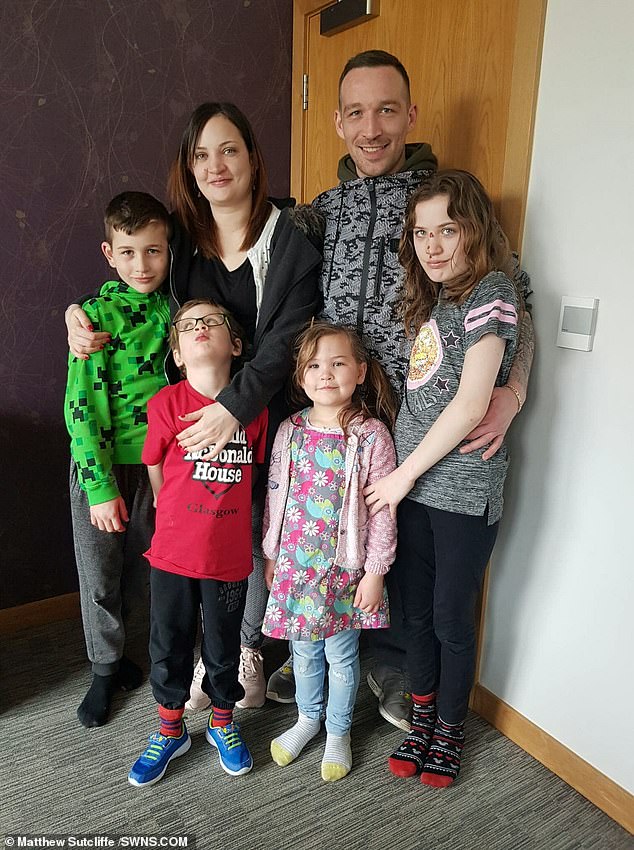 Mr and Mrs Sutcliffe have to juggle visiting their twins with looking after their other four children, Jessica, 11, Joshua, 10, Simon, six, and five-year-old Kimberly

‘She doesn’t feel like she’s getting the bonding time with them because she’s so far away.

‘Having seen them recently, I can tell that Hermoine is the happy go lucky one, she’s always smiling. But Natasha can be a little bit grumpy.’

Mr and Mrs Sutcliffe hope they can be moved back to the hospital in Dundee where they were born.

The couple, who say they have been ‘financially drained’ by their girls’ illness, are trying to raise £10,000 to help the family travel to be together and buy things for the girls when they get out of hospital.

To donate visit their GoFundMe page.