Five Napoli fans were arrested after skirmishes outside Anfield before Liverpool’s 1-1 Champions League draw against the Serie A side.

Three men were detained for violent disorder, one for affray and another for breach of the peace.

‘Three men were arrested for violent disorder and another was for affray following disorder on Walton Breck Rd before the game.

‘A fifth man was arrested for breach of the peace at the turnstiles on Anfield Road.’

Videos have circulated on social media of fans marching through the city centre brandishing what appeared to be sticks and also of incidents of aggression on Anfield Road immediately before the match. 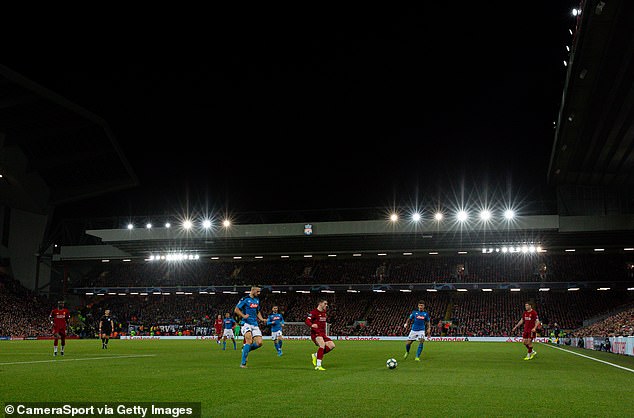 On the pitch, Liverpool earned a 1-1 draw in the Champions League group stage clash

Claims that Napoli fans were carrying golf clubs as weapons were dismissed by police.

‘Merseyside Police is aware of social media posts saying Napoli fans are armed with golf clubs in the city centre,’ said a statement earlier in the evening.

‘Officers have responded and confiscated a number of flags attached to flag poles. No golf clubs have been found.’