Only five of the whales that were beached in Western Australia have survived, after more than 150 became lodged on the shore.

Six were released into the ocean last night but one of those became re-stranded on the beach, according to 7 News.

The recovery operation along the beach is expected to take the weekend as each beached whale needs to be put into the back of a truck and disposed off site.

With 145 whales all weighing three to four tonnes it will be a lengthy process. 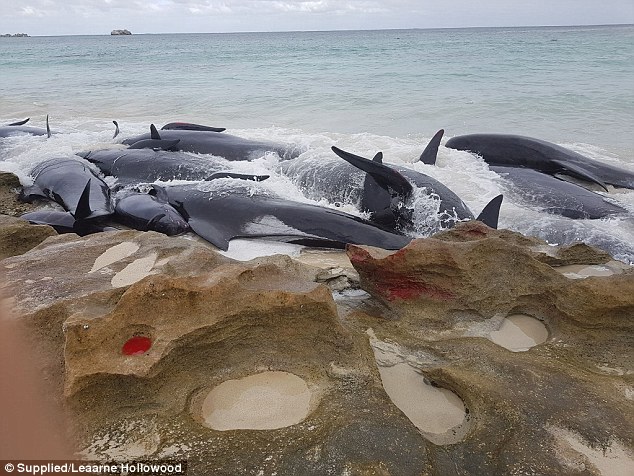 Only five of the short-finned pilot whales survived on Hamelin Bay, 10km north of Augusta on the Western Australia coast

To take those surviving whales back into the open sea rescuers used cranes and hammocks to carry them a kilometre down the beach and volunteers were seen in the water in an attempt to coax the animals back into the water, according to the ABC.

Distressed locals in Hamelin Bay rushed to the seafront when they spotted the 150 short-finned pilot whales, some of which had crashed into rocks on the beach.

One woman told the Daily Mail Australia when they initially got to the beach, they assumed all the animals were dead before noticing some were still desperately trying to get back into the water. 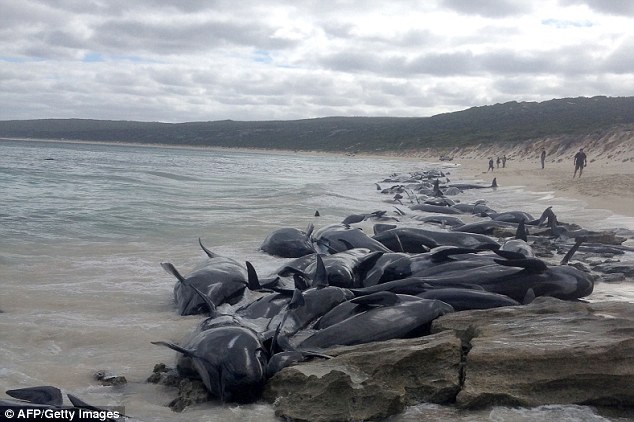 But the whales who survived were caught on blood-soaked rocks or stuck behind dead animals, unable to move.

A warning has been issued for people not to get in the water, with experts fearing deadly sharks could encroach on the shoreline to feast on the carcasses.

‘A shark advice has been issued due to multiple whale carcasses being reported at Hamelin Bay, near the town of Augusta,’ the shark advice alert from the Western Australian government said. 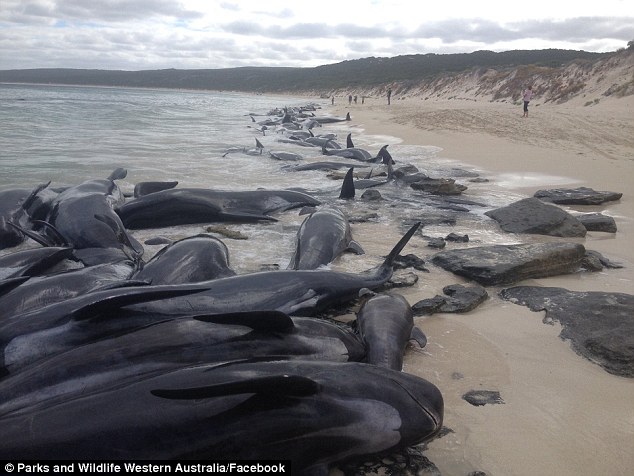 It is not known why the whales washed up on the beach, but it is thought they were following subtropical waters around the coast.

The species typically follow one alpha when finding the warmer waters, and it seems it’s relatively common for the leader to misjudge shoreline and end up on the beach en masse, according to the Telegraph.

The March 23 incident is the biggest mass stranding in Western Australia since 1996 when 320 long-finned pilot whales beached themselves.

In 2009, nine years ago to the exact day, more than 80 whales and dolphins died in a similar case in Hamelin Bay.

Three years ago there was another incident involving 20 whales who all died after becoming stranded in Bunbury in south Western Australia.

Leaarne Hollowood from Margaret River jumped out of bed to the scene when she heard about the whales on Friday morning.

She described the dreadful moment she discovered the whales swept up on the beach.

‘It was horrific, at first I thought they were all dead and that it was just the waves moving them around,’  she told Daily Mail Australia.

‘As we got closer, I realised a lot were still alive, trapped on the rocks or  in front of other dead whales, I just felt so helpless.’ 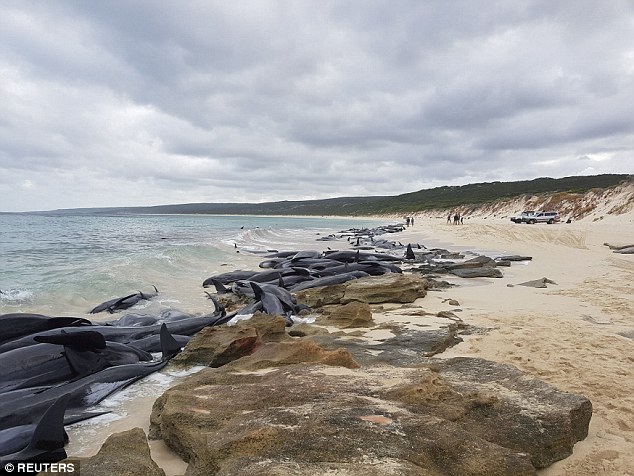 ‘I just wanted to comfort them and help them…I couldn’t bare to watch and not help, a lot of tears.’

Ms Hollowood said she would be going back to the scene on Friday afternoon to help.

‘Heading back there now, she said…apparently they need more people with wetsuits to help,’ she said. 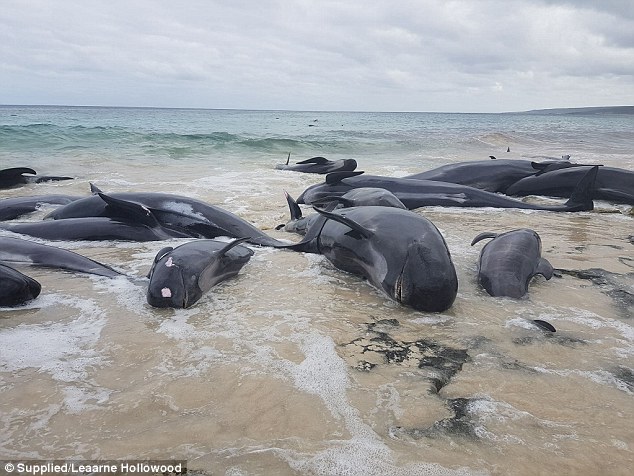 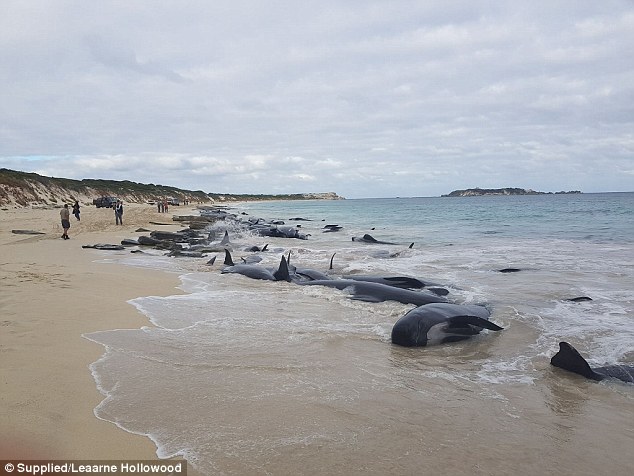 ‘I just wanted to comfort them and help them…I couldn’t bare to watch and not help, a lot of tears,’ said Ms Hollowood 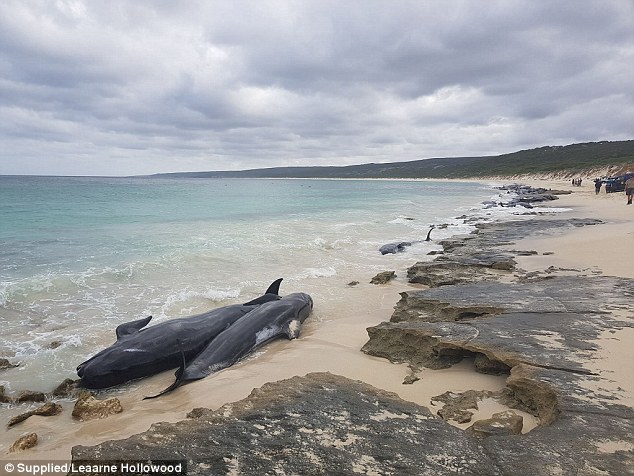 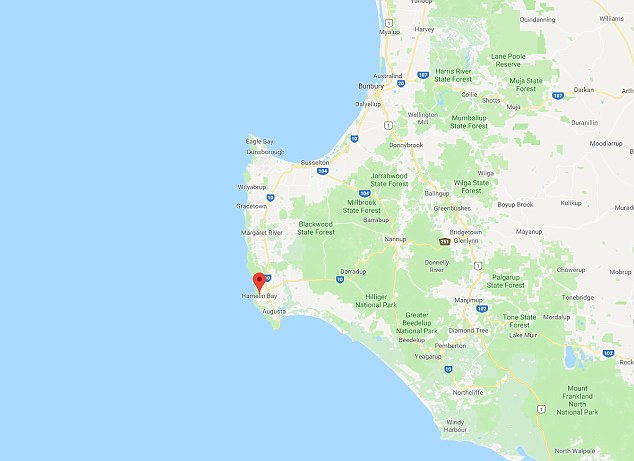 A map showing the location where the whales were found at at Hamelin Bay, 10km north of Augusta on the Western Australian coast