Five university students have been expelled from campus after they were busted partying in their drom rooms with as many as 20 people during lockdown.

Students staying in Campus East at the University of Wollongong, south of Sydney, ignored health orders at the start of the lockdown which has now been in place for close to eight weeks.

A student blamed the lack of enforcement from the dorms’ management for stopping several parties from going ahead.

Five students staying in Campus East at the University of Wollongong, south of Sydney, have been expelled from the accomodation after they were caught throwing parties during lockdown

‘They [Campus East management] didn’t really give us many rules to go by so there were heaps of parties at the start in people’s dorms,’ the student told the ABC.

He said eventually the hammer was brought down after two parties received noise complaints.

‘There was one incident where there were 20 people in a room and the night clerks came along and everyone got written up for it,’ he said.

Soon after, the police were called in and 11 students were fined. Five were later expelled from the campus accommodation by the university.

UoW student and accommodation services director Theresa Hoynes said the university would not tolerate students breaching lockdown and warned police would be called if they did. 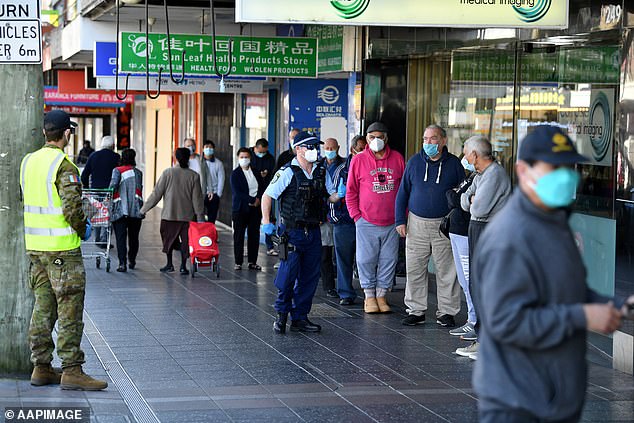 Sydney residents are seen in Campsie on Thursday while police and ADF carry out compliance checks. There were 681 new cases in NSW on Thursday

She was ‘disappointed’ by the deliberate breaches and said many in the area were worried about a potential outbreak on the scale of Sydney’s.

‘They are making deliberate decisions to breach public health orders and we can’t tolerate that,’ she said.

Wollongong is under the same stay-at-home orders as Sydney which has seen the highest number of cases recorded amid the current outbreak.

Another 681 infections were recorded around the state on Thursday.

The NSW lockdown is due to end on August 28, but with daily case numbers getting higher, residents fear they will be confined to their homes for much longer. The NSW and Greater Sydney lockdown is due to end on August 28 but with daily case numbers getting higher, residents fear they will be confined to their homes for much longer (pictured in south Strathfield, Sydney)