Europe and Bali are always beckoning Australians looking for an overseas holiday in the depths of winter.

But there are many countries worth considering off the beaten track in Asia, Africa and the Middle East.

In the second half of 2018, journalist Dan Piotrowski visited 16 countries during a five-month trip of a lifetime with his partner.

Here are five unexpected destinations in Africa, the Middle East and Asia he judged as worth of a place on a traveller’s bucket list.

You don’t see too many tourism advertisements for Taiwan, but the island state boasts fresh air, surprisingly lush greenery and one of Asia’s best cities.

A short hop across the sea from the Chinese mainland, Taiwan is an underrated gem, home to immaculate Taipei, spectacular vistas and towering marble cliffs.

The island may only be spoken about it in western media for its fraught relationship the Communist party (it was taken over by the fleeing Chinese opposition in 1949). But there was little sense of crisis when I visited in November 2018, and it’s a very pleasant destination for any Australian mulling a short holiday in Asia.

Taipei and the island’s small towns are energetic hubs of democracy and cheap food, with Hello Kitty something of a deity and pineapple cake the snack du jour.

But it’s away from the skyscrapers where the island truly shines.

The stunning turquoise waters of the Taroko Gorge National Park, in eastern Taiwan

Hualien, a small town with a pebbly beach on Taiwan’s east coast, is the nation’s second largest city – but is home to just 100,000 people.

Hualien’s hostels and homestays are the essential base for hikers and wilderness lovers hoping to explore the Taroko Gorge, a natural wonder.

The walks vary in difficulty and can get very tough. Our mettle was tested by a 5.5km, four hour hike from Lushui to Wenshu. The first 1.5km was vertical.

We had completed walks in the previous five months, but we were not prepared for that.

Nevertheless, the hike is doable, and there is a scorching hot spring worth sneaking into at the end.

What to do: Hike Taroko, drink tea at Maokong’s 24/7 teahouses, visit the original Din Tai Fung, ascend Taipei 101, breathe the fresh air and, if you love cats, visit Houtong

What you won’t do: They’re everywhere, but the popular arcade claw machines are never going to let you win

Israel and the Palestinian Territories

Over 10 days, we visited Tel Aviv, Jerusalem and the Dead Sea plus the Mars-like cliffs of Jordan (below).

Tel Aviv is Bondi-with-skyscrapers – a place of beaches, bar-hopping, and a boardshorts culture. The city has a bit of a nerdy atmosphere, on account of the big ‘Silicon Valley’ style tech businesses that call it home.

Meanwhile, Israel’s capital, Jerusalem, is less than an hour away by bus but is like another world. It’s a place of sandstone walls and rolling green hills, the nation’s religious heart.

Jewish tradition touches every facet of everyday life – from the kosher fake-meat  on sale at the supermarket to the public transport shutdowns on some Jewish holidays.

Heading home after a day of sightseeing one afternoon, my partner and I noticed a small wooden hut out the front of our Airbnb’s apartment block.

‘Was that there before?’ my partner asked. ‘Yeah, of course it was,’ I scoffed. I hadn’t been paying much attention.

The hut with palm fronds serving as a thatched roof was a sukkah – a temporary ‘booth’ erected by our neighbours for the weeklong Jewish festival of sukkot.

Some Jews eat, sleep and pray inside sukkah for a week. The booths sit on apartment balconies, in fire escapes, out the front of businesses and in communal courtyards, like our unit block.

The hut’s arrival was a harbinger of the cultural discovery to come.

The Jewish quarter is home to the Western Wall, also known as the Wailing Wall, where pilgrims bow, weep and sing from the Torah.

The Church of the Holy Sepulchure – Christianity’s holiest shrine – is also a top sight for pilgrims (and pilgrim-watchers).

Many visitors wept wept as they kissed the Stone of Anoiting, a symbol of the same stone where Christ’s body was anointed.

(We were unable to fully explore the Muslim quarter, due to prayers that day.)

One of the highlights of our Israel jaunt was our day-trip, by bus, to the Dead Sea – a salt lake bordering Jordan where the water temperature is hotter than the land.

The water was about 33 degrees when we visited. The lake’s salt concentration is so high swimmers float on the surface and cannot really ‘sink’.

The salt water quickly dehydrates you and leaves your skin feeling oily… but you can lie on your back and read a broadsheet newspaper without plunging to the bottom.

What to do: Swim in the Dead Sea, take a tour bus to Jordan, visit the Wailing Wall, bar-hop in Tel Aviv, and gawk at the military hardware conscripts carry at the shops

Word of warning: Take it from the author’s personal experience: a ragged travel beard will NOT help you get to your flight quickly at Ben Gurion Airport

What you won’t do: Get anywhere quickly in Jerusalem during a religious holiday, with public transport replaced by a system of ‘shared taxis’

Israel is a great place to base yourself if you’d like to explore the deserts and ancient ruins of Jordan.

We leaped on board a popular hostel chain’s three day bus tour from Tel Aviv, and it was one of the best decisions we made on our trip.

The first day involved a long bus commute and a tedious border crossing – but ended with us watching the valley of Amman erupt in its afternoon call to prayer.

We slept in a (touristified) Bedouin camp in the desert and then explored the Roman ruins of Petra, one of the ‘new seven wonders of the world’.

The archaeological site gets busy, but the further you hike into it, the more you are rewarded with donkey sightings and spectacular desert views. 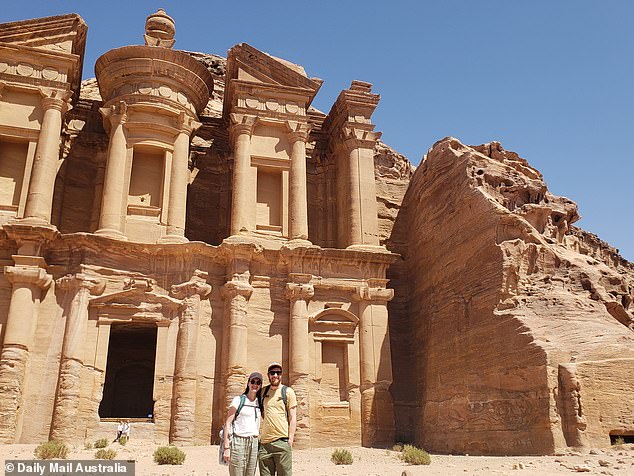 One of the archaeological highlights of Petra – the Monastery, several hours hike into the site

The rolling dunes of Wadi Ram (better known as the moon of Jedha in Star Wars) were similarly awesome.

Jordan is safe, compared to the much of the region, although like Israel, the Australian government says tourists should exercise a high degree of caution. You have to be on alert dealing with the locals in Petra, who eke out an existence hawking their wares to (and sometimes scamming) tourists.  Our tour was accompanied at all times by a ‘Tourist Police’ officer, who seemed to have a quite relaxed job.

The country takes every opportunity to boast of its prorgess. Our guide regaled us with her story of how she became one of the ‘only female tour guides’ in the country. She pointed to the country’s glamorous royal Queen Rania, its female Parliamentarians and a female fighter pilot as symbols of progress.

What to do in Jordan: Hike through Petra, surf down the sand dunes of Wadi Rum and sit at the lookout in Amman and listen to the call to prayer

What not to do: Let unknown local guides in Petra take you on their own ‘side tours’ – it will cost you, and they may take you on a route that disrespects the site

What you won’t do: Dress in a way that disrespects the culture

Seoul, the capital of South Korea, is a bustling hi-tech city worth eating your way around.

Each BBQ restaurant serves its fare differently and there’s nothing more satisfying than barbecued pork wrapped in lettuce leaf and lathered with peanut sauce.

Great joys of Seoul include attending a KPop gig -they are occasionally free, on the streets, at the weekend. Beauty is a national obsession and face-masks are vastly cheap

Shopping centres are veritable palaces. For the beauty-conscious, face-masks are a must. They are far cheaper than in the West, and some locals apply one every day.

The shadow of history hangs over South Korea. A walk along the city wall (check the opening hours) is marked with signs telling of scuffles with North Korean soldiers who had traveled too far south.

Demonstrations are hard to avoid on weekends and the Korean War museum provides a terrific lesson in history.

What you should do: Master the Korean BBQ, listen to Kpop, pick up some Korean face-masks and visit the Korean War museum

What you won’t do (if you’re unlucky!): Visit the DMZ. By all means, you should. But tours can often be cancelled for ‘military reasons’ as the situation is ever-changing

We visited Tanzania, Kenya and Zanzibar on a 13 day ‘Road to Zanzibar’ tour regularly ran by an Australian company.

The tour began in Kenya’s capital Nairobi (unfortunately known as ‘Nairobbery’) but spent most of its time in Tanzania.

Highlights include three days on safari in the Ngorongoro Crater and the world famous Serengeti National Park.

Most of the tour is spent camping, although there are luxury options for those willing to spend a bit more.

Tourists get the opportunity to see the Big Five of the animal kingdom (our tour saw four) and sleep in an unfenced campsite very close to the animals.

An elephant visited one afternoon, and we could hear a pack of hyenas at night (nothing to worry about!).

The safari zone was not swarming with tourists when we visited in October, just weeks before the wet season. But there was one depressing exception. The sighting of a sole leopard prompted a rush of about a dozen tourist buses from all over the park to stalk the noble creature for more than an hour.

Most of the time, we were delighted by hippos, elephants, lions and cheetahs on our own. We chuckled at a rather amorous giraffe and gained a new appreciation for Africa’s birdlife, including the so-called ‘secretary bird’. Its feathered dress apparently looks a lot like an office assistant wearing activewear.

Zanzibar, a former spice kingdom and semi-independent island to Tanzania’s east, was the Intrepid expedition’s final destination and provided some time to relax by the beach. It’s not an unlike many other beach paradises closer to home, like Fiji, the Whitsundays and Vanuatu.

What you should do: Take a tour with an accredited and experienced operator. Check travel warnings on the SmartTraveller page by Australia’s foreign ministry

What you shouldn’t do: Wander off too far away from camp on your own. Our tour guide  told a story of two overly enthusiastic amateur photographers who travelled with a different tour company. They got eaten by a hippopotamus while conducting a photoshoot by a lake, he claimed. No word on whether it was true

The author accepted no favours from any travel operators and travelled independently.