Flasher is banned from talking to women for five years

A flasher has been banned from talking to any woman he does not know for the next five years after a string of offences.

The drastic measure was imposed on Jason Littlewood, 48, after he dropped his trousers in front of a woman while wearing stocking and suspenders to fulfil a sexual fetish.

The 48-year-old, who also exposed himself in the process, asked her ‘what do you think of this?’

Magistrates heard Littlewood, from Whinny Hill, County Durham, had previous convictions for exposing himself and sending indecent messages and decided drastic action was needed to stop a repeat offence.

A flasher has been banned from talking to any woman he does not know for the next five years after a string of offences. File photo

They imposed a Sexual Harm Prevention Order which bans Littlewood from pestering or chatting to any women in public for five years.

The order prevents Littlewood from ‘contacting, approaching, or communicating with any female whom he does not know in a public place other than to obtain goods or services.’

The only exception is inadvertent contact, such as paying for shopping, or an emergency situation and if he breaks it he could face a fine or up to five years’ imprisonment.

At his 90-minute trial earlier this year his female victim described what happened as she walked through the centre of Carlisle at 2am on November 19 last year.

She said: ‘The defendant beckoned her over to the doorway of Lloyds Pharmacy in English Street and asked for a cigarette.

‘He offered me a line of cocaine.’ 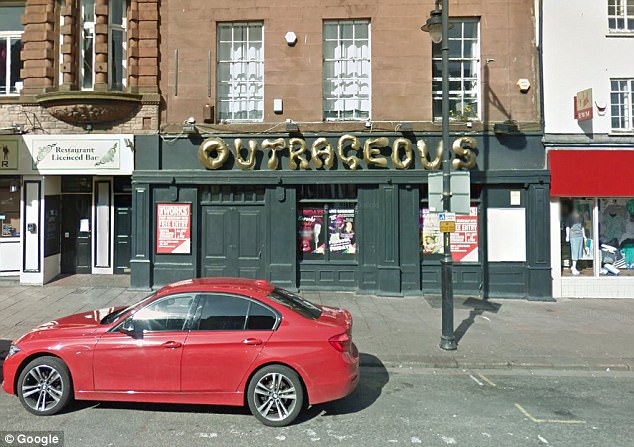 He struck up conversation about the Outrageous nightclub (above), in Carlisle, which his victim had just come out of

He struck up conversation about the Outrageous nightclub, in Carlisle, which she had just come out of.

Littlewood asked her: ‘Do men dress in women’s clothing there? adding that he fantasised about following a woman home while he was dressed in lingerie.

She replied: ‘He asked me if I was into that sort of thing.’

Without warning he then dropped his jeans exposing himself and revealing that he was wearing knickers, black stockings and suspenders.

The woman told the court she told him to put his trousers back on, warned him not to approach women like that and walked away.

She said the encounter left her feeling ‘uncomfortable’.

Littlewood, who denied indecent exposure claiming it was an accident, said: ‘It’s a bit of a fetish I have got, that I like dressing up.’

He was working away from home and had drunk ‘a few’ pints there before heading into town, where he met the woman.

Chairman of the Bench Tom Lomas, sitting in Carlisle Magistrates Court, Cumbria, told Littlewood: ‘It was clearly intentional. We feel that there was specific targeting of a vulnerable victim.’

Littlewood had previously been convicted for indecent exposure in 1990 and sending a menacing or indecent message in 2015.

He received a 36-month community order and a 30-day sex offenders’ rehabilitation course.

He was told he must carry out 200 hours of unpaid work will be on the Sex Offenders’ Register for five years.

In 2016 Nicholas Crawshaw was given the same restriction despite being cleared of six rapes and four sexual assaults against eight women.

Cheshire Police said he was a ‘sexual predator’ and the Sexual Harm Prevention Order was the result of a ‘wholly unique and extraordinary’ set of circumstances.

The ban also prevented him from going into bars and pubs after 9pm or having sex in public.