The All Nippon Airways flight that took off for Tokyo from Los Angeles on Tuesday afternoon finally landed in Japan early Thursday morning.

‘We are HERE!’ tweeted Teigen at 7:34 am local time, roughly 17 hours after her flight was scheduled to arrive at Narita International Airport.

Teigen also revealed that her husband John legend celebrated his birthday in the air, with the Grammy-winning singer turning 39 on Thursday.

The flight first took off just before noon on Tuesday and then had to return to LAX, landing at around 7:30pm after an unauthorized passenger was found to be on the plane.

A government official and a law enforcement source are now telling DailyMail.com that this was all caused by two brothers who boarded the plane in Los Angeles, despite the fact that only one had a ticket for the ANA flight while the other was meant to be flying on a United Airlines flight to Tokyo.

The two sources did not provide the names of the men or the reason one boarded the wrong plane, but said that airline employees became aware of the situation during the journey.

Both men did have similar names the sources said and are American citizens. .

Teigen tweeted at the airline shortly after arrival on Thursday: ‘Honestly everyone on the ground and in the air were very kind and apologetic. But I just need to know why we couldn’t have flown to tokyo and settled this one person’s mistake (who was going to tokyo all along) there, in tokyo. 230 people on this flight.’ 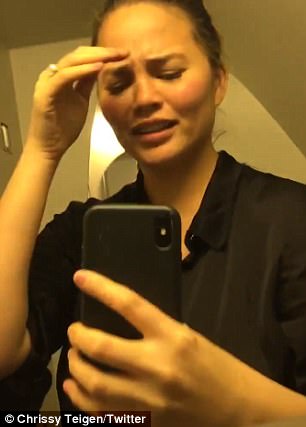 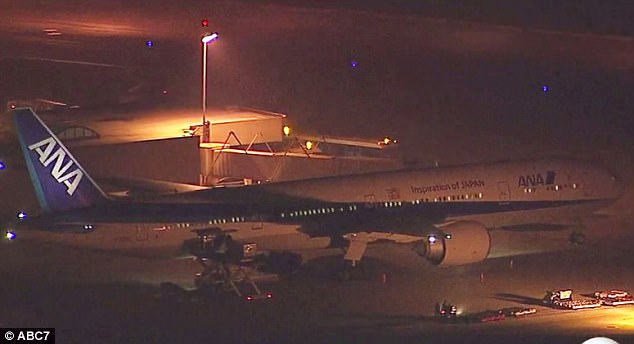 Back to the start:It is now being revealed that this was caused by two brothers who boarded the plane despite one having a ticket for another flight to Tokyo 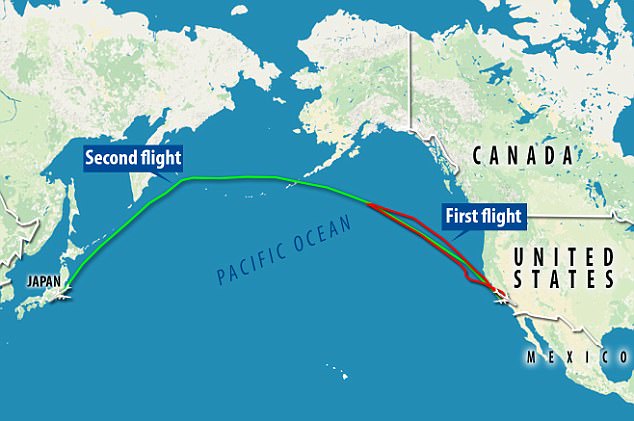 Questions: Many, including Teigen, want to know why the flight could not just continue to Tokyo rather than have to turn around four hours into the journey

‘The cabin crew notified the pilot that one of the passengers boarded the incorrect flight, and the pilot in  command made the decision to return to the originating airport,’ ANA told DailyMail.com in a statement.

‘We take great pride providing exemplary customer service, and on this flight we failed to do so.’

A spokesperson for the Los Angeles Police Department said that the incident was ‘not a security issue.’

It remains unclear however when airline employees discovered that the passenger had boarded the wrong aircraft.

A look at the planned route for the aircraft versus its actual flight pattern shows that the plane veered off course roughly an hour into the journey, staying close to the coast of California rather than heading out into the Atlantic.

The plane would have been forced to fly for at least eight hours before it could land again safely at LAX due to the fact that it was carrying enough fuel for an 11-hour journey.

Dec. 26, 11:36am: Flight takes off from Los Angeles International Airport bound for Tokyo

12pm: Flight veers off course and stays closer to the coast of California rather than heading out into the Pacific

3:20pm: Passengers are informed that the flight will be diverting back to LAX because a passenger on the trip was not supposed to be on flight

3:30pm: Plane begins the process of turning back towards LAX

8:32pm: Passengers are taken off the plane and put in buses to return to the terminal after speaking with police and federal agents.

Passengers were not told of the situation however until just before the plane was diverted back to LAX according to Teigen, who tweeted: ‘a flying first for me: 4 hours into an 11 hour flight and we are turning around because we have a passenger who isn’t supposed to be on this plane. Why…why do we all gotta go back, I do not know.’

She went on to write that she and the other passengers were informed as they returned to Los Angeles that all passengers would be forced to deplane, but were given little information about what caused the problem.

‘They keep saying the person had a United ticket. We are on ANA. So basically the boarding pass scanner is just a beedoop machine that makes beedoop noises that register to nowhere,’ tweeted Teigen as her plane made its way back to LAX on Tuesday.

Once the aircraft landed, it was brought to a secure area and passengers were questioned by authorities.

‘There is a 20 minute interview before we can get off the plane!! This is my dream. Police! Talk to me talk to me,’ wrote Teigen.

The passengers were held on the plane for over an hour while police and federal agents investigated the incident and eventually taken by buses back to the main terminal, were they had been earlier that morning.

‘Police were interviewing all the people seated around the mystery person once we got off the plane. Why would they do this! I MUST KNOW MORE,’ wrote Teigen.

She and Legend were put in an airport lounge while waiting for the same flight to refuel, while most passengers were kept in the main boarding area and then taken to an airport hotel. 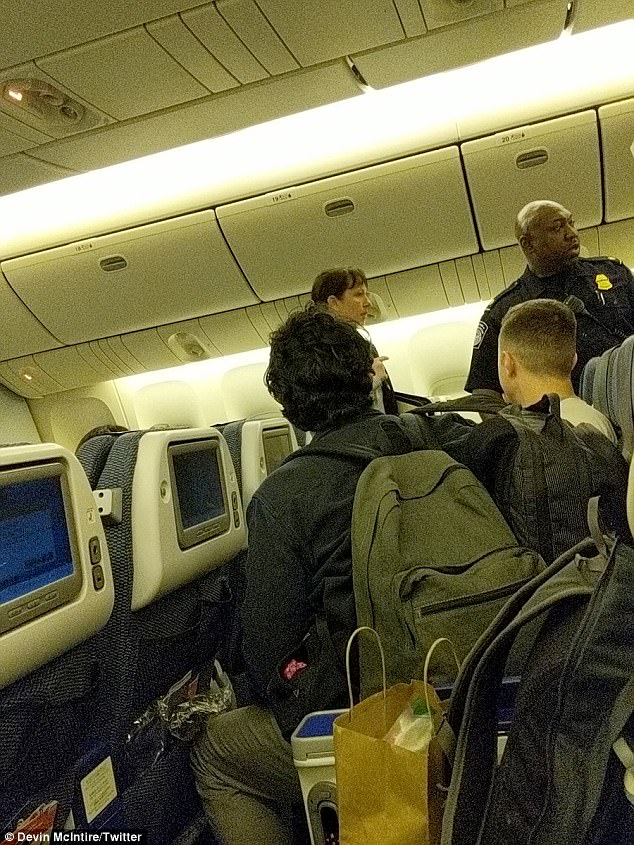 Questioning: Police officers spoke with passengers after the flight landed back at LAX Tuesday evening (above) 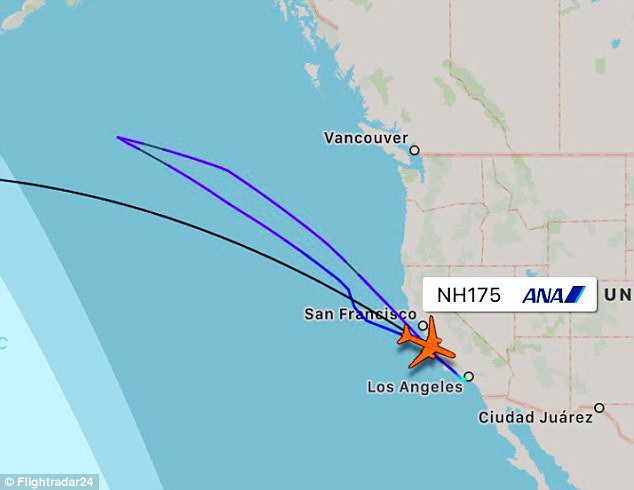 Change in pattern: It is not known when the airline learned about the passenger, but the plane would have had to fly for eight hours before it could safely land to burn off fuel (planned path in black, actual path in blue)

Chrissy Teigen tweeted the entire debacle of a flight that took off for LAX bound for Tokyo, but had to be turned around four hours into the trip for an unauthorized passenger on board

Devin McIntire shared photos of police on the plane, a flight attendant informing a passenger about the situation, and the scene outside the terminal as he and others waited for buses to take them to the hotel.

‘Flight NH175 couldn’t complete the journey because @FlyANA_official let the wrong person on the plane,’ he tweeted, calling the situation ‘seriously sad.’

He later tweeted: ‘Waiting for the supposed hotel bus… Flight #NH175 keeps getting better… @ChrissyTeigen maybe you got somewhere better to hang?’

No sooner had some passengers arrived at the hotel however than the flight was ready to head out once again on its intended journey.

Another passenger on the flight, Marie Lum, also expressed her annoyance at the situation, tweeting: ‘We’re all currently just sitting here waiting for the airline to tell us what we’re going to do. We should have just kept going, this entire situation is so bogus. The whole plane has to take the weight for this one guy??? How in the world.’

She went on to write that passengers were given an option as to how they wished to be compensated for the inconvenience.

‘Now we have the choice to get a $200 voucher for shopping at the airport or we can go to a hotel and be reimbursed through our receipt,’ she wrote on Twitter.

‘Some people straight up canceled their flight, they don’t want to fly ANA anymore and they rescheduled on a different airline. Probably smart tbh lol.’

She later revealed that the second flight was delayed as well, with the passengers again forced to stand around and wait.

Lum also claimed that while she and other passengers received $200 vouchers, the individual who boarded the wrong flight got a $500 voucher.

Teigen shared photos as she and Legend got back on the plane in the early hours of Wednesday morning before taking off again at 3:30am for Tokyo.

Three hours into that second flight there have been no major issues, though Teigen did reveal that stuffed Yodas were in some of the seats on the plane and the Star Wars theme was playing in the bathroom of the aircraft when she got back on board.

All Nippon Airways has multiple Star Wars-themed aircrafts in its fleet.