Two weather systems are making it difficult for holiday travelers to safely get to their destination, with the first being a downpour of rain affecting western states.

The bomb cyclone, a type of rapidly strengthening storm, has caused warning advisories to affect parts of every western state from Arizona to Montana.

The heavy storm hit residents on Thanksgiving Day and has resulted in record rainfall in more than half a dozen cities in Southern California.

And the weather is not expected to ease off, with even more flooding and snow set to matter the Midwest, New England the the Northeast over the weekend. It’s expected to reach its peak on Sunday, which is also the busiest travel day of the year.

More than 55 million people took to the air or road for Thanksgiving, making it the busiest holiday travel period – which officially runs for 12 days from November 22 until December 3 – in a decade. On Sunday, more than 3.1 million passengers are expected to fly – a new single-day record for air travel.

Flash floods in San Diego, California, were so strong that cars began to float down the road and become swept away in the current.

Sunday, December 1: The storm could bring snow from the upper Midwest to New England, with rain from the mid-Atlantic to the Southeast. Heavy snow may be possible in the Upper Midwest and parts of the interior Northeast.

But before the holiday weekend rounds out, forecasts predict that Friday will continue to see heavy rains across the state, with a 30 percent chance in Los Angeles and a 60 percent in Orange, Riverside and San Bernardino counties.

However, they’re expected to begin easing up Friday night in time for the Southern California ski season.

The National Weather Service San Diego reports that some areas could reach around three inches of rain on Friday.

Similarly, precipitation maps show parts of the state will be hit with moderate to strong rainfall this weekend.

The National Weather Service Los Angeles warned residents near the Woolsey Burn scar to watch out for falling mud or rocks dislodged by rain. 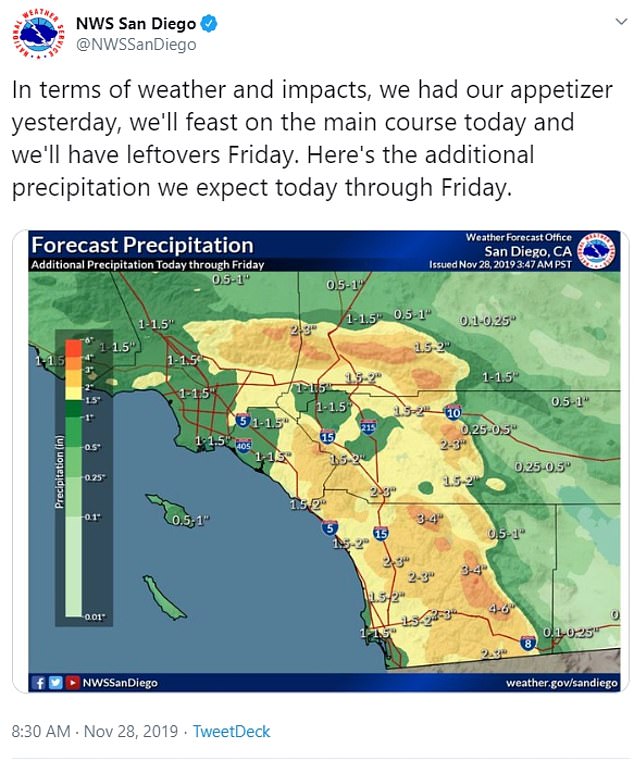 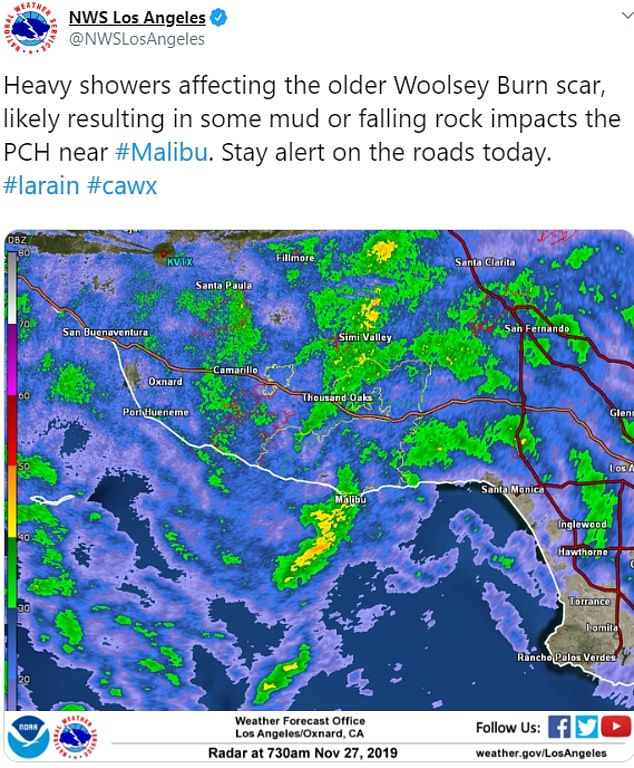 This ‘unprecedented’ storm is usual because it set low-pressure records in parts of Oregon and Northern California, according to CNN.

Snow has also started to fall in some areas in California,  Matt Moreland, a National Weather Service meteorologist, told the Orange County Register.

‘It’s very low for this time of year,’ he said. 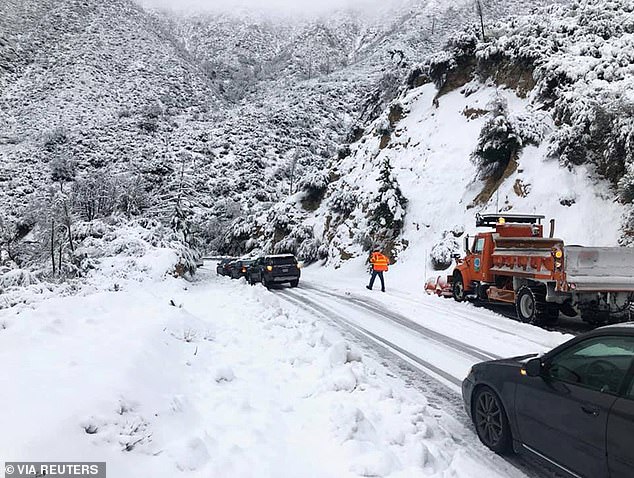 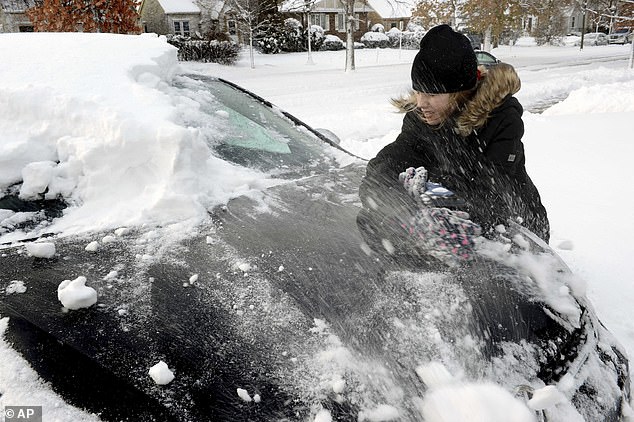 A woman in St. Paul, Minnesotta attempts to wipe snow off of her car after snow and strong wind gusts hit the state

Emergency crews were forced to clear covered roadways in Palmdale, California, on the Angeles Crest Highway.

In the Northeast, heavy snow has residents struggling to drive on icy roads and shoveling snow off of walkways.

Minneapolis declared a snow emergency after a the city was hit with blizzard conditions, including more than seven inches of snow fall.

This makes it the largest Thanksgiving eve winter storm in decades.

In Michigan, some areas have received 15 inches of snow and almost 14 inches fell in Wisconsin.

The storm is expected to begin to decline after hitting Wisconsin and Nebraska before tapering off into the Atlantic.