By Jane Keightley For The Daily Mail

We’re all of the same mind. Then, as we step out of our hotel on the Piazza del Duomo, one of us says: ‘I hope they think we live here.’

That’s because I’m travelling with two girlfriends and have promised to show them the lesser known sights of this fabulous city — and we’re determined to blend in seamlessly, as if we’re locals.

We start with a typical Florentine breakfast — hot chocolate that you have to eat with a spoon and a pastry filled with cream. We’ll burn off the calories exploring, I say.

Jewel of Tuscany: Jane Keightley travelled to Florence with two of her girlfriends to explore the city’s lesser-known sights

Piazza della Santissima Annunziata is where we begin. It is dominated by a bronze equestrian statue of Ferdinando I. Count the bees on the plaque attached to its base. If you can do it without touching or pointing, it is supposed to bring good luck.

We visit the nearby Ospedale degli Innocenti and its museum. This was where unmarried mothers came to give their babies away — anonymously on the ‘rota’, a small revolving door. It was in use from 1600 until 1875.

The exhibits are heartrending. There are hundreds of small tokens that the distraught mothers broke in half, so they could reclaim their baby if better times came. We take stock at the café at the top of the museum, which has a great view. 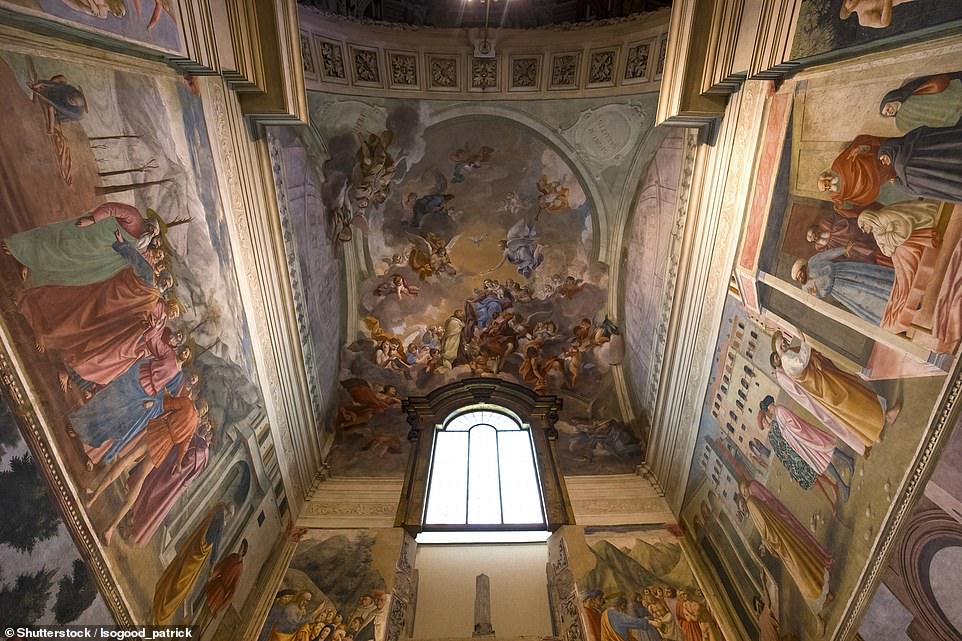 Exquisite: The walls of Florence’s Brancacci Chapel are painted by great artists including Masaccio

Later, we head towards the ring road and my friends wonder where I am taking them. In the middle of noisy traffic is the English Cemetery. If you have seen the film Tea With Mussolini, you will know this is the resting place of Elizabeth Barrett Browning and other notable expats. It is well worth a visit.

As our stomachs begin to rumble, we head for the Mercato di Sant’Ambrogio, which is bustling with locals. Taking the lead from an eccentric old lady with a yappy dog, we knock back something orange and strong. We also try Lampredotto (tripe) — and are decidedly underwhelmed.

Mellow from our trip to the market, we visit the National Museum of Bargello. This imposing structure housed a prison in the 18th-century, but is now home to the most important sculpture collection in Florence.

The first statue we spot is drunken Bacchus by Michelangelo, which is appropriate in our tipsy state. There are a few other well known sculptures such as Mercury by Giambologna and Donatello’s effeminate-looking David. Being a big fan of his films, I want to visit the Fondazione Franco Zeffirelli, which tells the story of the famous director’s life and work.

Some of his best known films are Romeo And Juliet, The Taming Of The Shrew and Brother Sun, Sister Moon.

One of my friends had requested we visit the Brancacci Chapel. I was up for this as, on my very first trip to Florence, I had been amazed by Masaccio’s fresco Expulsion from the Garden of Eden. No other artist has ever captured the anguish on the faces of Adam and Eve as he did.

At the Uffizi and Accademia galleries, my friends have the same reaction I did when I first visited — wonder.

Hungry, thirsty — and tired, we stay in the Oltrarno district on the south side of the river to eat.

This is the part of Florence most tourists rarely visit except, perhaps, to go to the Pitti Palace and the Boboli gardens.

Afterwards, while sipping a complimentary limoncello, my two friends ask: ‘Can we come back here again tomorrow?