Florida beach community named happiest, healthiest place in the US

Naples, Florida, has been named the happiest and healthiest town in the US for the third year in a row.

The beach community that includes the town of Immokalee and Marco Island took the top spot in the 2017 report by the Gallup-Sharecare Well-Being Index.

Overall there was a decrease in Americans’ well-being in 2017 with not a single state showing a significant improvement from the year before and declines in well-being across 21 states.

However, the communities highlighted in the Gallup-Sharecare report offer a silver-lining against the dismal national and statewide results and could be used as examples for how improvements could be made.

The beach community that includes Naples, Immokalee and Marco Island, Florida, scored the highest in overall well-being in 2017 according to a Gallup-Sharecare report

The report by Gallup and Sharecare asks Americans across the country about their personal, financial and social situations to calculate an overall measure of well-being in 185 metropolitan areas.

This is the first time that the same community has taken the top spot three years in a row since the report was first published 10 years ago.

‘It’s a place that’s got a lot of good things going for it,’ Dan Witters, the report’s research director, told TODAY. ‘It’s pretty close to a clean sweep.’

It’s also the first community to rank first or second across all five elements of well-being:

About half of the lowest-ranked communities are located in the South, with Fort Smith, Arkansas, taking the lowest or second lowest spot for three years in a row.

This year it dropped out of the 185 to number 186, preceded by North Carolina’s Hickory-Lenoir-Morganton area Florida’s Gulfport-Biloxi-Pascagoula area.

The poll also found that in 21 US states there was a decline in residents’ well-being compared with 2016 levels.

Additionally, not a single state saw an increase in well-being in 2017 for the first time in the 10-year history of the poll.

That’s the largest number of states to see a drop in well-being in over 10 years, shattering the previous record of 15 states after the Great Recession in 2009. 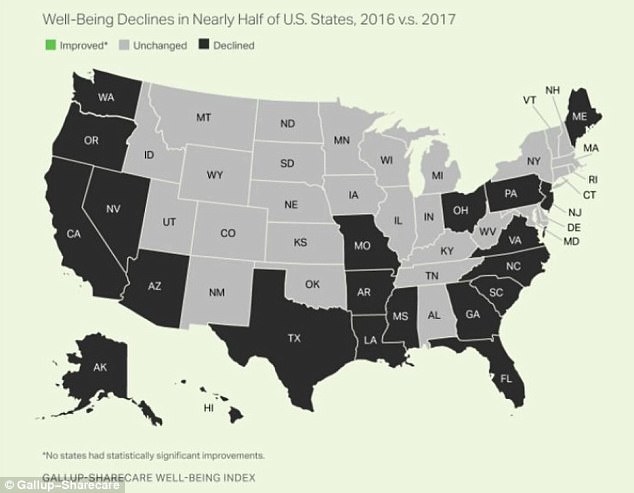 The map above shows the 21 states that saw an decrease in resident well-being in 2017 (shown in black). All of the remaining 29 states’ scores remained the same from 2016 (shown in gray)