Florida dad who was hospitalized with COVID-19 after his son, 21, tested positive is discharged

A father who spent several weeks battling COVID-19 after contracting it from his oldest son, who ignored his parents’ advice to stay home and met with friends, has been discharged from a Florida hospital.

Community members, medical staff and loved ones gathered outside of Westside Regional Center in Plantation, to celebrate John Place’s recovery after more than a month under medical supervision.

The entire Place family tested positive for COVID-19 in June after Places’s 21-year-old son fell ill and later learned that a friend he hung out with was infected.

Place, who suffers from diabetes, was hit with the most severe symptoms and was hospitalized soon after, He spent at least two weeks on a ventilator.

Their story made headlines after Place’s wife, Michelle Zymet, posted a Facebook Live video in July that pleaded with younger adults to take COVID-19 seriously.

In a new Facebook Live video shared by Zymet on Thursday, Pharrell Williams’ ‘Happy’ blasts from a music speaker as a number of people eagerly wait outside the hospital entrance.

The 42-year-old father is soon wheeled out of the hospital and greeted with loud, emotional cheers from the waiting group.

Michelle and their children are seen rushing through the crowd and enveloping Place in a tight embrace.

Then, Place proves he’s on the road to a successful recovery by gingerly standing up from the wheelchair and pumping his hands into the air in celebration.

John Place (center) of Plantation, Florida, was discharged from the hospital on Thursday after spending six weeks battling COVID-19

Place manages to take a few steps forward before getting back into the wheelchair as the overjoyed crowd claps.

At one point, Place appears overwhelmed by emotions and is gladly comforted by his family.

In an interview with NBC Miami shortly after, Place summed up his feeling with just two words: ‘I’m Alive!’

‘That’s what I am. I feel amazing. I can’t even tell you how I feel,’ Place told the publication.

‘I’ve been in the hospital for over 40 days, I was on a ventilator for 20 days. This is the most amazing thing. I want to thank all the doctors, nurses, and healthcare professionals here at Westside Regional Medical Center. They saved my life.’ 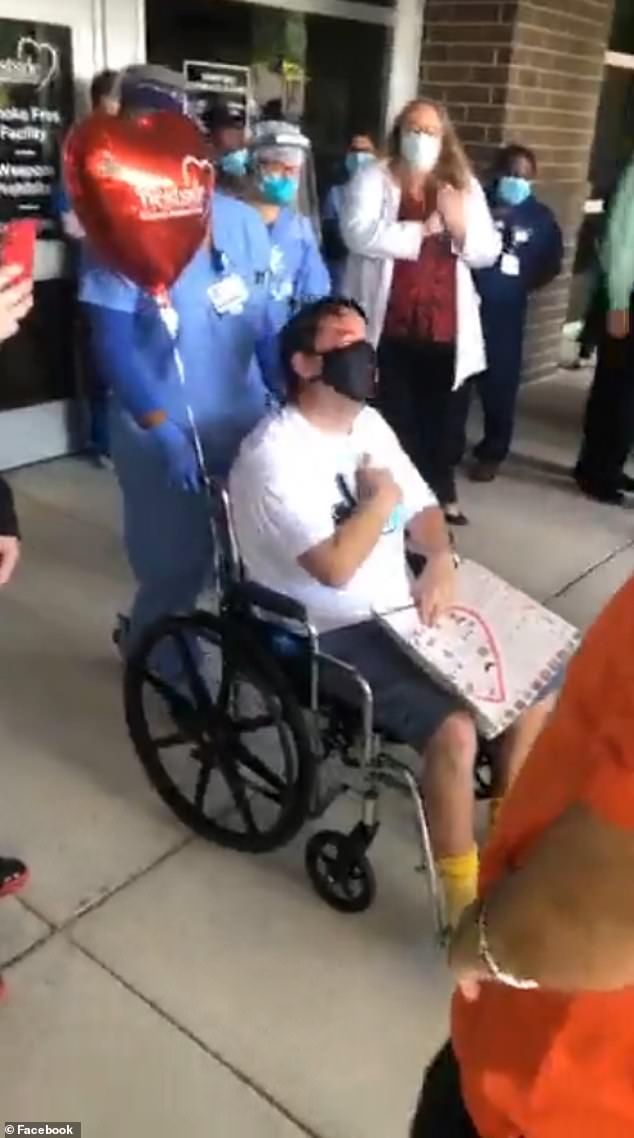 While speaking with reporters, John Place (center) thanked medical personnel and nurses who took care of him during his hospital stay

He added that his nurses played a big role in his recovery by going above and beyond with their care.

‘You know, I was very lonely because there’s nobody. I just wanted to hold her hand, said Place, referring to a nurse.

‘And she held my hand the whole time…and that really means a lot. They saved my life. I love them,’ he added, breaking down into tears.

Place said he already has tons of plans now that he’s left the hospital, including taking his young daughter swimming.

‘This is a true miracle,’ Zymet said. ‘100 percent I believe in the power of prayer.’

Zymet wrote in a Facebook post on Thursday that Place’s return home comes after six weeks in the hospital.

‘Wow JJ you really captured every moment perfectly and brought me to tears all over again!! We are so blessed and grateful for this day and to have Place home with us finally after 6 long weeks!! What an Amazing feeling!’ she wrote. 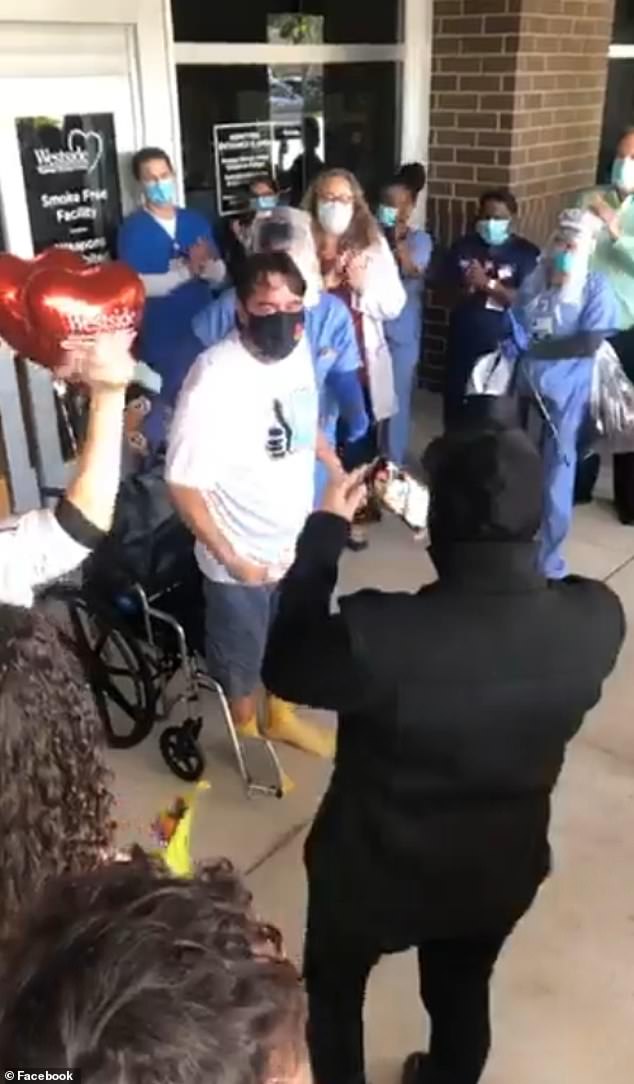 John Place (center): ‘I’ve been in the hospital for over 40 days, I was on a ventilator for 20 days. This is the most amazing thing’

Place revealed on Facebook that he was back at his Plantation house with an in-home nurse.

The nurse was going over ‘the 10 pills and insulin and whatever else I need to [take],’ he wrote. 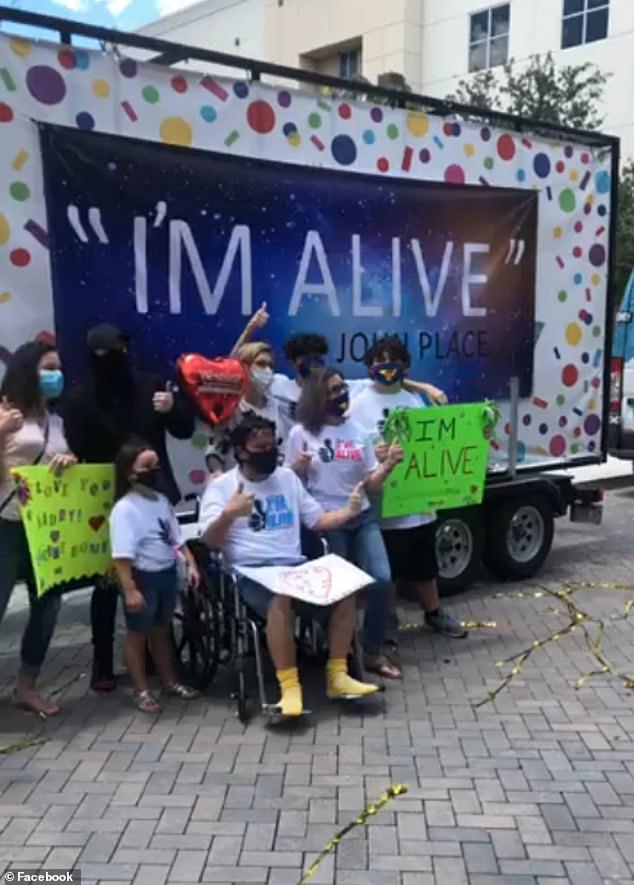 Meanwhile, cases of COVID-19 have continued to spike across The Sunshine State with particularly concerning statistic in the southern half.

In Broward County, which contains Plantation, nearly 60,000 cases and 782 deaths have been recorded as of Thursday.

There were 3,595 hospitalizations, with the infected population’s median age 39 and more white residents testing positive.

The ordeal began in June when the entire Place family fell ill with COVID-19 after Place’s son after hanging out with friends despite his parents’ advice to avoid gatherings.

‘He always assured me, “Don’t worry, mom. I’m doing everything right, relax, chill.” You know how these kids are, so I trusted in him,’ Zymet told 7 News Miami.

She said she begged him to think about his dad, who is at a higher risk of severe COVID-19 illness because he is overweight and diabetic.

But despite her pleas, he went out against her wishes one night in June, when he gathered with friends at a bar and removed his mask while eating and drinking.

Days later, he felt cold symptoms and a friend at the get-together told him she had tested positive for coronavirus. By then, it already had taken hold in the young man’s household. 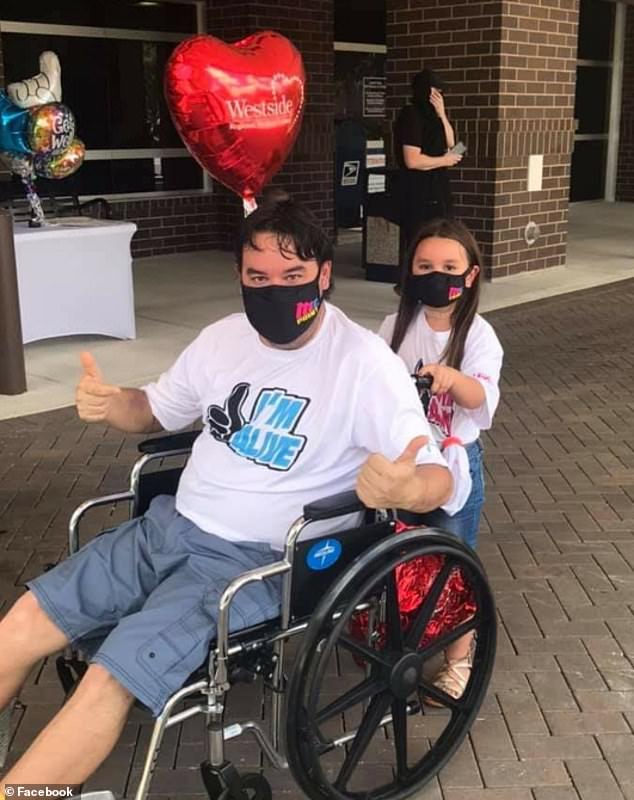 Pictured: John Place (left) posing with his six-year-old daughter after he was discharged from a Florida hospital on Thursday 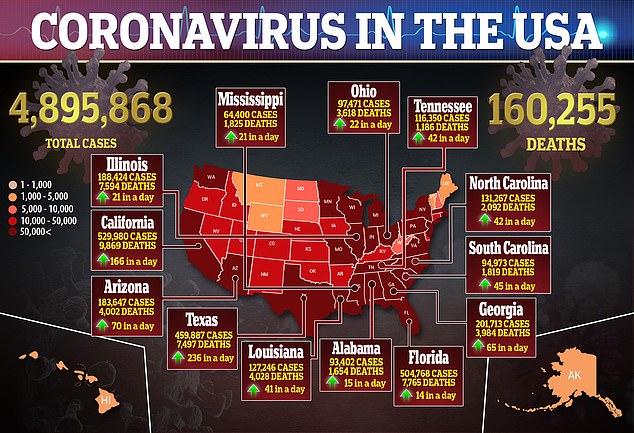 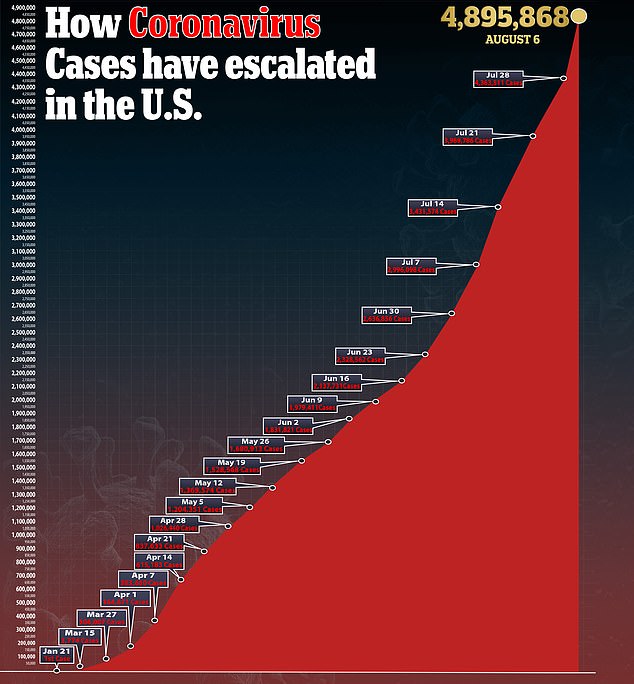 ‘You let your guard down just one time, it’s all it takes,’ Zymet added. ‘You come home, and you infect the entire house.’

The illness’s spread among members of the family highlights the outcome dreaded by authorities who feared the recent surge of cases hitting younger Floridians would spread to older, more vulnerable people.

‘They don’t necessarily listen. It could be peer pressure,’ Zymet said.

‘Maybe they think, “None of us are sick. We are fine.” They don’t understand many of us are asymptomatic and are positive carriers of the virus.’

The young man, who did not want to talk to the media, had told his father and stepmother that he initially thought he had a common cold and took over-the-counter medication. 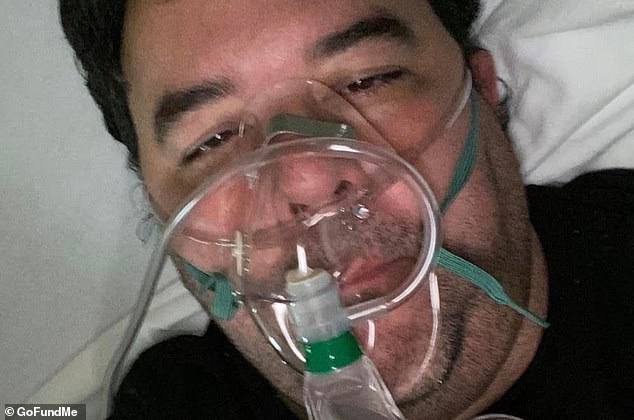 Place, who is overweight and diabetic, required hospitalization after four days of fever and nonstop coughing 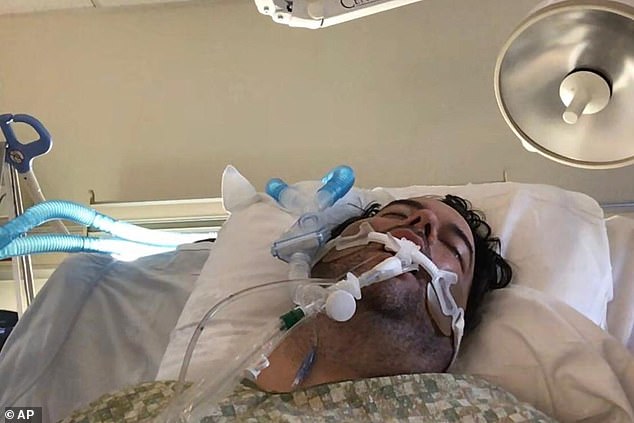 John Place, 42, from Plantation, Florida has been in the intensive care unit at Westside Regional Medical Center for nearly three weeks after falling seriously ill with COVID-19

When he heard about his friend testing positive for coronavirus, he still didn’t think he had it.

But members of the family started to fall ill one by one, starting with his 14-year-old brother, who is also overweight and was wheezing, coughing and lethargic.

The six-year-old sister had only a runny nose. The stepmother was achy, with a fever and chills.

Zymet and her children had recovered from the virus, but her husband remained in serious condition in the ICU.

With Place unable to work at his photo booth business, Zymet’s friends have launched a GoFundMe campaign to raise funds for the family as they brace to handle hefty medical bills.

Zymet said she has been called an ‘awful mother,’ and an ‘evil witch’ for placing the blame on the stepson, but she said she thought it was important to share her family’s story amid a surge of infections first detected among young people. 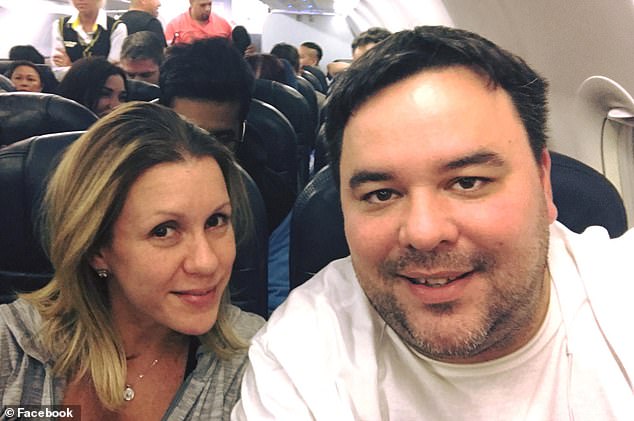 Wife Michelle Zymet (left) said she had begged her stepson to be cautious for his father, but he still went out against her wishes 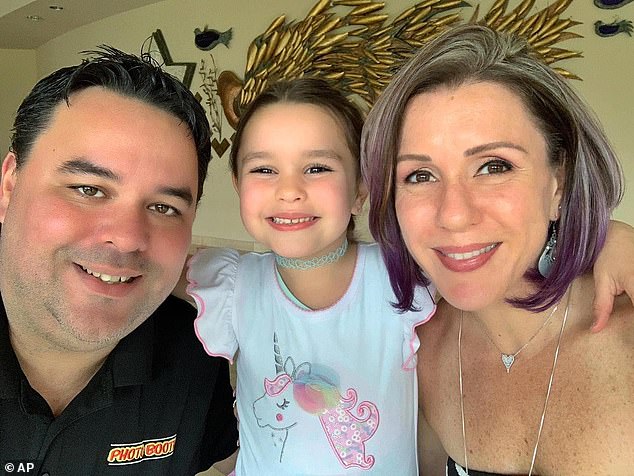 At the time, Miami-Dade County Mayor Carlos Gimenez said younger people were celebrating the end of school or college, in some cases joining street protests and otherwise just getting together at house parties, underground venues and restaurants that converted themselves into bars late at night in violation of the rules.

With so many close-knit, multigenerational families in the community, spread to older members of families seemed inevitable, he said.

‘Since the young kids started infecting each other, now we see the results as more older folks are now going into the hospital,’ Gimenez said.

Zymet and her family isolated at home, and Place was on a ventilator for more than two weeks.

She said her stepson helped take care of the younger children and researched the disease while she juggled work in between calls to the hospital, nurses and doctors.

She said the younger generation ‘won’t know until it hits home.’

‘This has definitely brought us together,’ she added. ‘We could have eventually gotten this disease somewhere else. But it is the unfortunate truth that he did bring it home.’