A Florida family has taken to dressing up their manatee-shaped mailbox for the holidays, and the internet couldn’t be more delighted.

A Twitter user named Marley tweeted a series of photos of her neighbor’s manatee dressed up as everything from Santa Claus for Christmas to a graveyard ghost for Halloween, and people have gone wild over the heartwarming pictures.

‘My neighbor has this manatee mailbox he dresses up throughout the year and I’m kind of obsessed with it,’ the student at University of Central Florida explained.

‘Kind of obsessed’: A Twitter user named Marley tweeted a series of photos of her neighbor’s manatee mailbox dressed up throughout the year 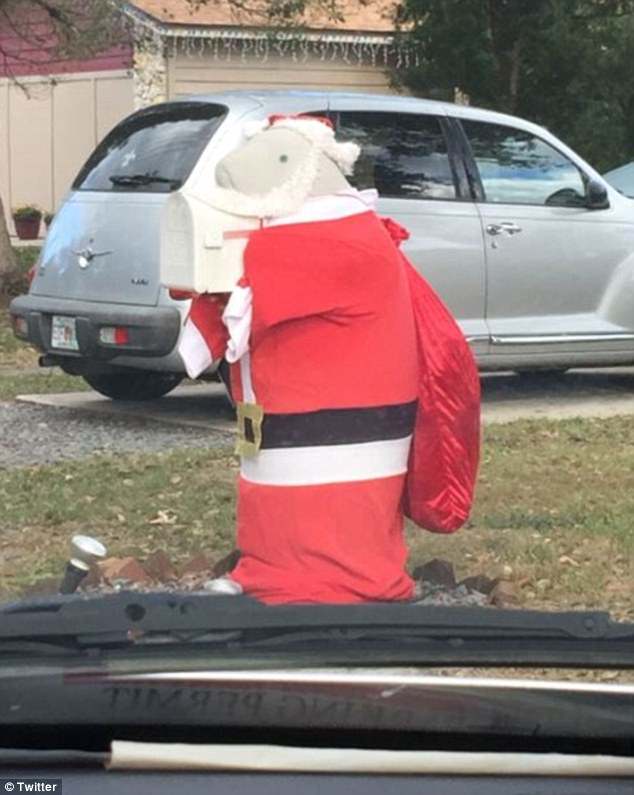 ‘Tis the season: This December the manatee is sporting a red Santa suit and carrying a bag of presents 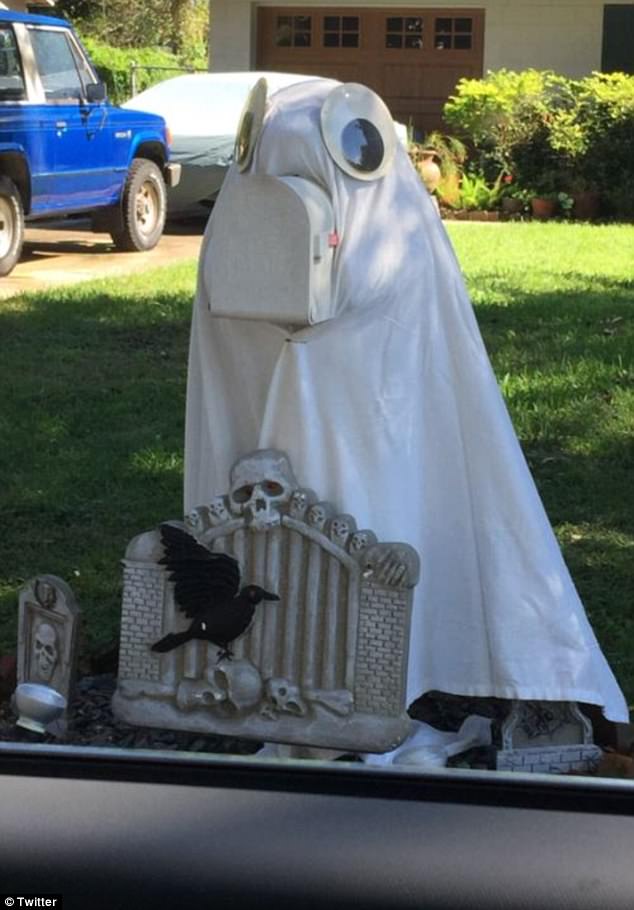 Boo! Marley’s neighbor dressed the manatee up as a graveyard ghost for Halloween

The series of images starts with a picture of the manatee bundled up in a yellow rain poncho, a nod to the hurricanes that hit the state year after year.

As a reminder to the rest of the neighborhood, a sign in placed in front of him reads: ‘Hurricane Season Ends Nov. 30th.’

In the next snapshot, the manatee is covered with a white sheet and has large, googly eyes placed on his head.

An ominous black grow is resting on the skull and bones tombstone placed below him in honor of Halloween. 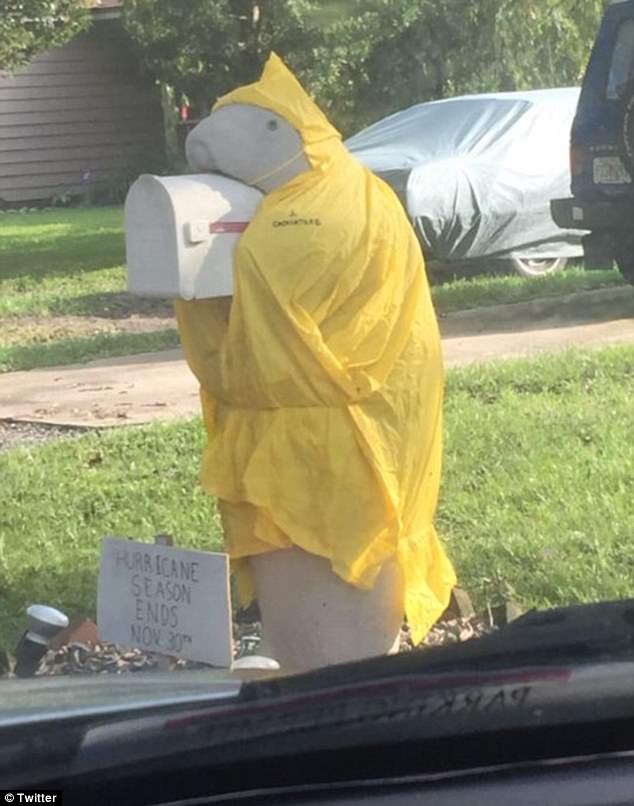 Dry humor: The manatee mailbox was bundled up in a yellow rain poncho during hurricane season 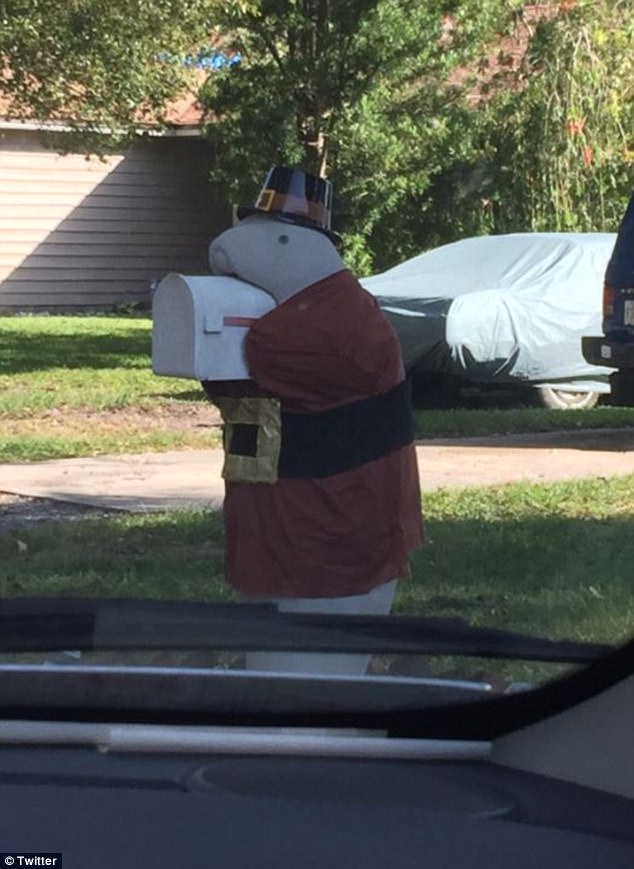 Giving thanks for this! For Thanksgiving, the mailbox donned a men’s pilgrim outfit complete with a top hat

Going viral: More than 38,000 people have liked her tweet, and many have commented on how great they think her neighbor is

Feeling the pun: Paula hunt joked that the Christmas-themed manatee is a ‘Santatee’

‘Extremely Florida’: Some other Twitter users noted that manatee mailboxes are actually quite popular in the state

For Thanksgiving, the adorable mailbox donned a men’s pilgrim outfit complete with large buckled belt around its waist and a black top hat.

The manatee seems to a perfect substitute for Santa Claus thanks to its round belly, and this December it is sporting a red Santa suit and carrying a bag of presents.

Marley isn’t the only one who is a fan of her neighbor’s creative display. More than 38,000 people have liked her tweet, and many have commented on how great they think her neighbor is.

‘What a joy it must be to live on this street or drive through this street regularly! Kristel Bijnen wrote. ‘Thank you for posting this.’ 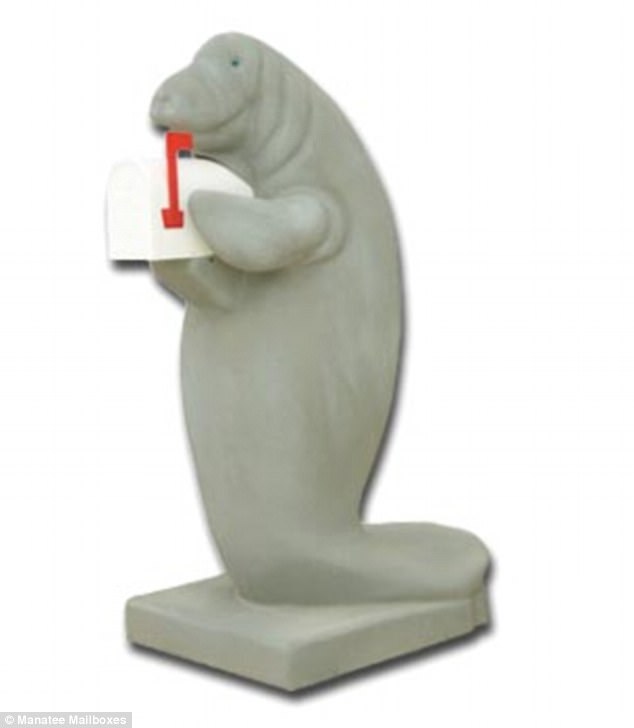 Manatee Mailboxes sells the mailbox for $595 on it’s site, and the company has a Facebook page dedicated to photos of its mailboxes dressed up

Patriotic: Some customers shared photos of their manatee mailboxes wearing red, white, and blue for the Fourth of July 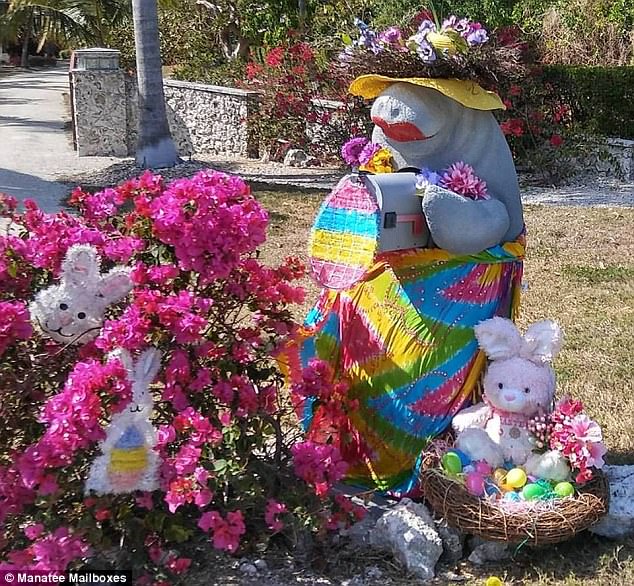 Festive: Another person went all out with this Easter-themed display 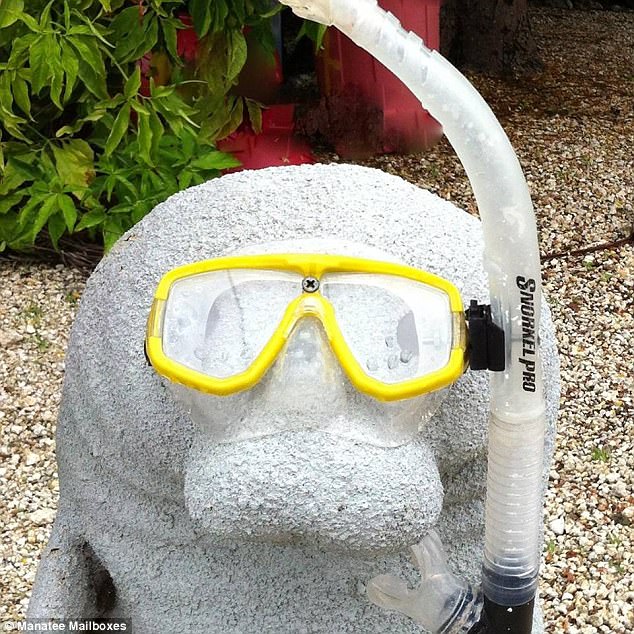 Simple, yet effective: One of the photos on the Manatee Mailboxes’ Facebook page sees a manatee wearing snorkeling gear

Paula Hunt joked: ‘The Christmas one is a Santatee.’

Meanwhile, some other Twitter users noted that manatee mailboxes are actually quite popular in Florida.

‘There’s one of those in my neighborhood, too!’ one Twitter user commented. ‘Extremely Florida.’

Manatee Mailboxes sells the mailbox for $595 on it’s site, and the company even has a Facebook page dedicated to photos of customers’ manatee mailboxes dressed up throughout the year.

Pictures on the page sees the manatees dressed up as everyone from Betsy Ross to a scuba diver.