A first grader was forced to stand by his teacher after taking a knee during the Pledge of Allegiance at his Florida elementary school on Monday.

The unnamed six-year-old boy is a student at Wiregrass Elementary School in Wesley Chapel, Florida.

When he took a knee as his classmates recited the Pledge, his teacher approached him and told him to stand back up to join in.

She then texted his mother to inform her about the incident and said that she chose to intervene because ‘in the classroom we are learning what it means to be a good citizen’.

The boy’s mother, who declined to be named, said she never told him to perform the stunt but is outraged that his teacher made him stand and said it wasn’t ‘her right’ to do so.

The unnamed six-year-old boy is a student at Wiregrass Elementary School in Wesley Chapel, Florida (above). He kneeled on Monday as classmates recited the Pledge of Allegiance

The child was no doubt inspired by a wave of NFL players and music stars who have taken a knee during the National Anthem at public events including sports games in the past week as a show of defiance against President Trump.

The debate, which began when the president said any player who did not stand for the anthem was a ‘son of a b****’ who deserved to be fired, has since spilled over into schools and households.

In her text message, the teacher said she was trying to teach students to respect the country and its symbols.

It read: ‘I just wanted to let you know that this morning when it was time to do the Pledge of Allegiance, (your son) went down on one knee.

‘I knew where he had seen it but I did tell him that in the classroom we are learning what it means to be a good citizen we’re learning about respecting the United States of America and our country symbols and showing loyalty and patriotism and that we stand for the Pledge of Allegiance. 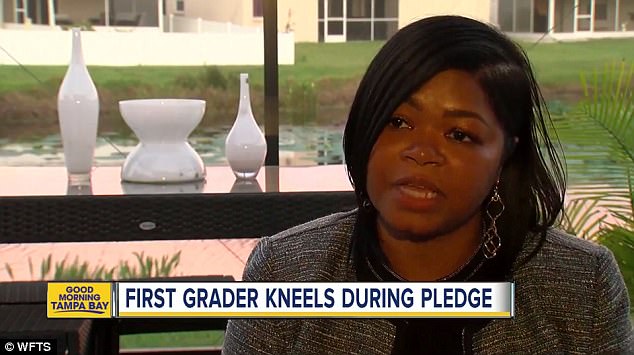 The boy’s mother, who declined to be named but spoke on camera, said it was not his teacher’s ‘right’ to intervene 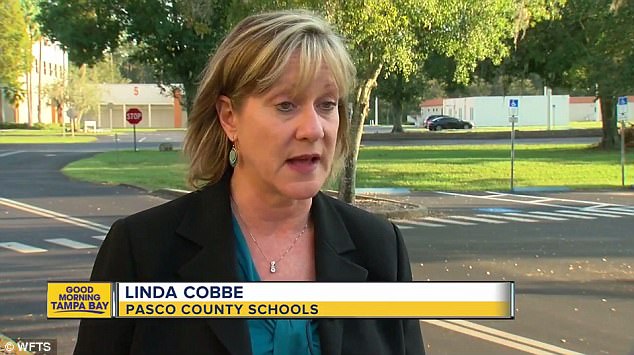 ‘I know its a sensitive issue but I wanted to make you aware. Thanks.’

The boy’s mother claims she should never have interrupted his protest. 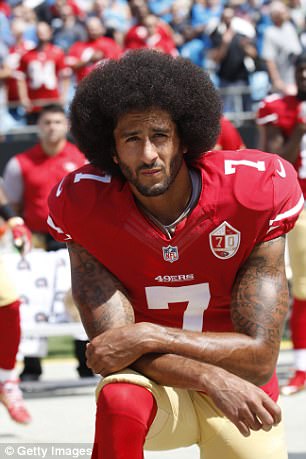 The child was likely inspired by a wave of NFL players who have taken a knee in recent weeks in protest against the president. Colin Kaepernick began the trend last year in a show of protest against racism

The school stood by the teacher and pointed out state law which dictates that every student must recite the Pledge unless they have a note from parents explaining their abstinence.

Even if they do not take part, they are still made to stand.

The boy’s actions sparked debate on social media where many said he was following in the footsteps of adults.

‘Kids are like sponges, they take everything in and do as they see, And if he watched football I’m sure he has been curious of why some people are standing and why some are kneeling,’ one person said.

‘What kind of example are these NFL players setting for the youth of America? This truly disgusts me,’ another remarked.

‘A child that age doesn’t know what’s really going on.Just mimicking what they see on T.V.’ said another.