Florida man, 48, who killed Pinky the flamingo in 2016, dies after being hit by a truck

An Orlando man accused of killing Pinky, a beloved flamingo at Busch Gardens, was hit by a truck and died, two months before he was to go on trial for animal cruelty.

The Tampa Bay Times is reporting that the Florida Highway Patrol says Joseph Anthony Corrao, 48, was killed on June 5 when he was struck by a pickup truck while crossing a busy road near his home in Orlando.

Corrao was walking north across State Road 50, near Story Partin Road in Orange County, shortly before 6 a.m., when a Ford F-150 pickup slammed into him. 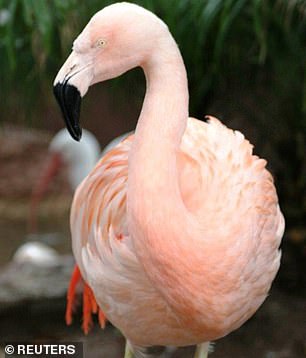 Joseph Anthony Corrao  (left), 48, was killed on June 5 when he was struck by a pickup truck while crossing a busy road near his home in Orlando. He gained notoriety in August 2016 after he was accused of killing Pinky the flamingo (right)

The uninjured truck driver was not cited, but an investigation into the crash is continuing.

Corrao’s death comes around two months before he was set to go to trial on an animal cruelty charge.

He gained notoriety in August 2016 after he was accused of grabbing the flamingo’s pink-feathered body from its pen and slamming it to the ground with such a force that it had to be euthanized.

Corrao was visiting the theme park with his mother and daughters when he threw Pinky down so hard that her foot was nearly severed, according to police.

He handled the bird so ‘violently’ that it suffered ‘traumatic’ injuries and could not be saved, Police Spokesman Stephen Hegarty and the Busch Gardens said at the time.

A witness also said Carrao was ‘plastered’ and that his mother tried to move him away from the bird before he grabbed it, according to WKMG.

Pinky was transported to an animal care center where veterinarians decided to humanely euthanize her based on the severity of her injuries.

Carrao was detained by the park’s security and arrested by Tampa police on a charge of felony animal cruelty. 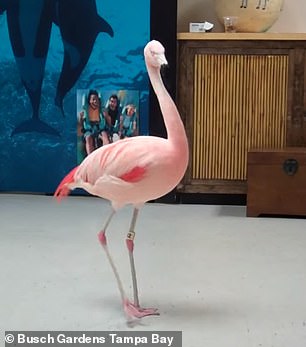 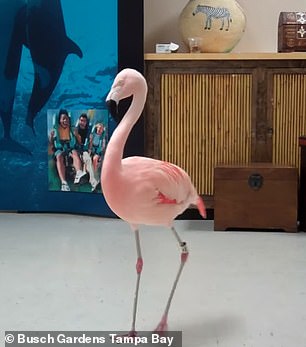 Pinky was a 19-year-old Chilean flamingo, hatched at the park in 1996. Her dancing movements (shown above left and right) made her one of Busch Gardens’ stars

He was jailed for five days and later released on bail.

Corrao told authorities he was just trying to show off to his daughter.

He did not mean to injure Pinky and apologized when he learned she had to be put down, police said.

Her dancing movements made her one of the park’s stars and ‘diva extraordinaire’.

‘Pinky loved to dance for our guests,’ said a park spokeswoman, Karen Varga-Sinka.

‘Her keepers say that this is not a trained behavior, but a natural behavior she loved to show off.

‘Flamingos are filter feeders, using their beaks to strain tasty morsels out of the water around them as they wade.

‘To stir up the tastiest treats, flamingos will stamp their webbed feet.

‘Pinky often performed this toe-tapping behavior out of the water for guests.

Pinky also appeared on behalf of the park’s conservation and education efforts as an ‘ambassador animal.’

‘She will be sorely missed,’ said Varga-Sinka.

‘It actually borders on depraved in my opinion… I don’t know if have you other issues, but I don’t know who does that,’ Hillsborough County Judge John Conrad said, according to a video feed of the court hearing.

Corrao’s defense team raised concerns about his mental health as his case moved through court.

Psychologists found he suffered from post-traumatic stress disorder, bipolar disorder and schizophrenia, according to court documents, and was not fit to proceed to trial.

A judge was told Corrao was disabled and lived on Social Security payments, according to the Tampa Bay Times.

The judge later received regular updates on Corrao’s treatment when the case moved to a mental health court.

But after Corrao was declared competent, the prosecution began moving again in March and a trial date was set for August.

Prosecutors dropped the criminal charge upon learning of Corrao’s death.

Corrao had a history of violence against animals, having been charged for shooting and killing two chained dogs at point-blank range with a shotgun in 2013.

He also had a long history of other arrests, including drug charges, driving under the influence and even child abuse, according to the Tampa Bay Times.