A Florida man is building a three-storey luxury home made entirely out of shipping containers, and he says it’s only going to cost him $250,000.

Architect Asghar Fathi says he is using the cargo containers, which he purchased for $2,500 each, to show the steel boxes could be used to create ‘sustainable, economical’ housing that’s easy on the eye as well.

‘The inside will be insulated and dry-walled. When this is done, you’ll never know it was done with a container,’ Fathi told Local 10.

Architect Asghar Fathi (pictured) is constructing a three-bedroom home out of recycled shipping containers he purchased for $2,500 each 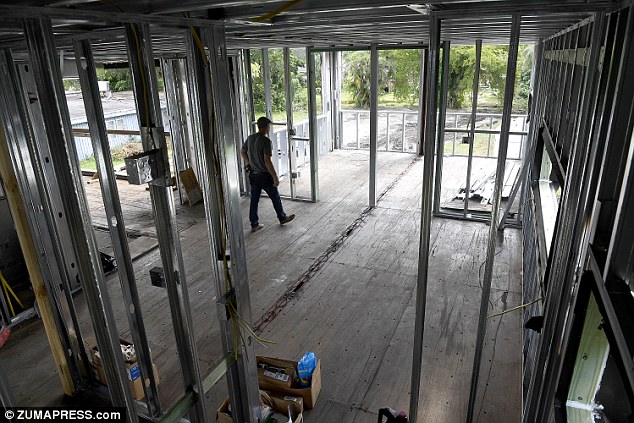 The architect says his soon-to-be completed home will be resistant to earthquakes, hurricanes, fires and even termites

He says the 3,000-square-foot home will be hurricane-proof, earthquake-proof, fireproof, and even termite proof.

‘This is sustainable, economical and easy to put together if you have the right crew,’ the architect told Orlando Sentinel, noting he also planned to install impact windows.

Fathi, who designs futuristic homes, offices buildings, hotels, churches and museums says he was never able to convince a client to use the cargo boxes, so he’s making the home for himself.

He says the process has so far been a breeze, telling Local 10 it took only eight days for the containers to be placed on the lot after the foundation was laid. In total, the house is costing Fathi $250,000 to build, and he hopes others take notice when looking for an affordable way to build their own custom house When it is finished, Fathi’s home will be covered in stucco, removing any sign the property was created with steel boxes 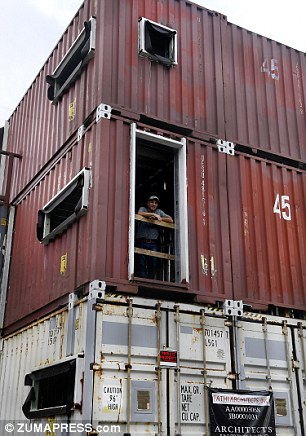 The three-storey home is made of eight shipping containers

There have been few issues in construction, but the architect says the project requires a talented and meticulous welder – something he was not able to find.

‘I’m dealing with some of the issues I had and fixing it as I go along,’ he said.

In the future, Fathi wants to see the containers used widely to construct affordable houses. He says he is following famed architect Frank Lloyd Wright, who believed small homes should be affordable for everyone.

‘I am basically following his footsteps with a different material so people can have a home without spending millions and millions of dollars,’ he said.

‘With one third, you can have a home and be proud of it.’

Not only is Fathi’s home affordable, but there’s no shortage of luxury.

In just a few months, when construction is finished and his family move in, they will be greeted by a three-bedroom home with an open deck, a living room, dining room and kitchen, a two-car carport and a studio. The house will take only a few more months to complete, at which point Fathi and his family will move in Finished product: Fathi says there will be no sign the home is made from shipping boxes when it is finished (artist impression)