‘What did I do wrong?’: Florida man caught in police chase after 140mph crash is baffled when pulled over and arrested for drink-driving

Speeding down the motorway at over 140mph, a silver BMW catches the eye of a Florida state trooper writing up a seatbelt citation.

The trooper, Jessica Sabo, instantly sprints to her car and chases after the BMW.

It takes four minutes of a high-speed chase for Ms Sabo to catch up with the speeding car.

As the driver, Scott Patrick Sorenson, 37, realises he is about to be caught he makes a last-ditch attempt to evade arrest.

Scott Patrick Sorenson, 37, gets caught driving at more than 140mph after crashing into a moving vehicle

He dangerously tries to manoeuvre his car between two other moving vehicles and ends up crashing into one of them, sending a tire and other debris flying.

Three children and three adults were injured in the crash.

Ms Sabo is forced to swerve on to a grassy verge in the middle of the motorway to avoid hitting the other car involved in the crash.

Sorenson eventually stops his car and Ms Sabo and other troopers immediately jump out of their vehicles and take their guns out. 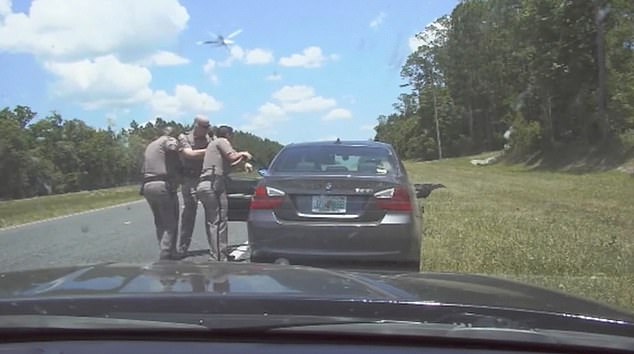 When police officers run to his car to arrest him, Sorenson refuses to get out of the car so has to be dragged 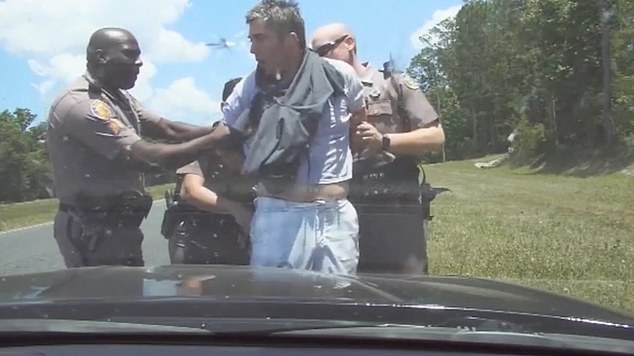 Troopers claimed his trousers were wet and smelled of urine and that Sorenson accused them of being terrorists. He was arrested on eight charges, including a DUI and aggravated fleeing with injury

As the approach Sorenson’s car they shout: ‘Get out of your vehicle!’.

Sorenson refuses and forces the troopers to drag him out before he asks: ‘What did I do wrong?’.

Troopers claimed his trousers were wet and smelled of urine and that Sorenson accused them of being terrorists.

He was arrested on eight charges, including a DUI and aggravated fleeing with injury.