Joseph Zak, 37, was arrested and charged with possession of paraphernalia after police found a plastic baggie with crack cocaine residue in his car during a traffic stop

A Florida man told police that the bag of crack cocaine found in his car during a traffic stop was blown there by ‘the wind.’

Joseph Zak, 37, of Port Saint Lucie, Florida, was arrested and charged with possession of paraphernalia following a traffic stop in Fort Pierce, Florida, on October 5.

Local authorities signaled for Zak to pull over because he failed to stop at a stop sign, according to his arrest affidavit, which was obtained by The Smoking Gun.

While Zak’s car was still in motion, the arresting officer said that he saw him ‘making furtive movements’ and leaning over the car’s center console as if ‘attempting to discard an item out the passenger window.’

Police said that when Zak stopped the car, they saw him trying to hide an open Budweiser beer can in the driver’s side door.

The officer said that Zak – who was described as slurring his words and having bloodshot and ‘glossy’ eyes – was ‘confrontational’ and looked around his car ‘as if attempting to conceal another item.’

Because of the open beer can, officers were able to remove Zak from his car. They then handcuffed him and obtained his consent to search the car. 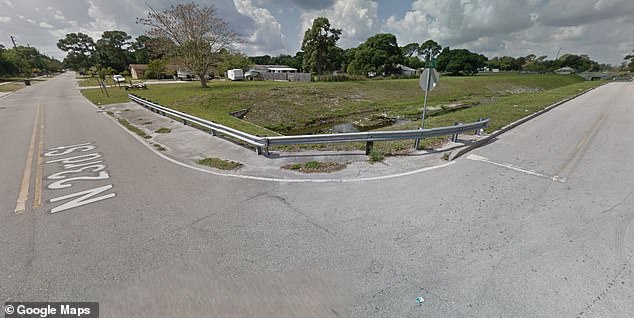 Police said that they stopped Zak after he failed to stop at the stop sign in this intersection. Officers said they saw him trying to hide an open can of beer when they approached the car

Police said the also found a baggie with crack cocaine residue in his car and that he claimed it wasn’t his. Police had spotted him at the Reno Motel (pictured) earlier, drinking alcohol in public and holding a baggie with a white substance in it 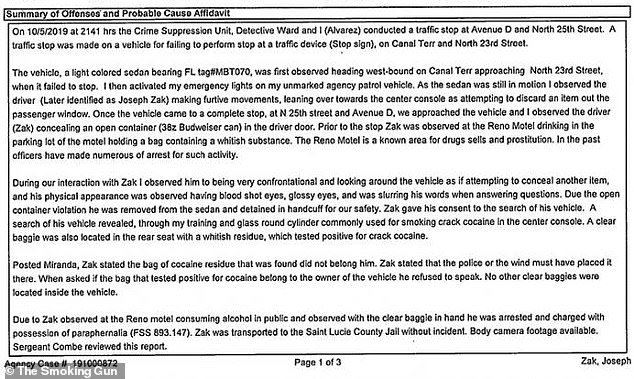 During the search, police said they found a ’round glass cylinder commonly used for smoking crack cocaine’ in the center console. They also found a clear plastic baggie on the rear seat.

A field test revealed that the baggie was positive for crack cocaine residue.

Zak then allegedly told police that the baggie wasn’t his and that ‘the police or the wind must have place it’ in his car.

He was said to have refused to answer whether the plastic baggie belonged to the owner of the car.

Police said that prior to the traffic stop, Zak was seen in the parking lot of the Reno Hotel, drinking alcohol in public and holding a bag ‘containing a whitish substance.’

Police described the Reno Motel as being ‘a known area for drug sells and prostitution,’ where officers had made multiple arrests.

Zak was then charged and taken to St. Lucie County Jail. He was later released on bond, according to the Smoking Gun.

He is due in court on December 3 for an arraignment hearing.