A Florida lawmaker filed a lawsuit on Monday alleging that the executive order that requires Orange County residents to wear protective face masks to slow the spread of Covid-19 is unconstitutional.

Anthony Sabatini, who filed the lawsuit along with a local businessman, believes that requiring residents to wear masks infringes on their rights.

Orange County Mayor Jerry Demings put the mask order into effect as of Saturday, June 20, which stipulates that residents must wear masks in public with the exception of some circumstances.

The order was issued after Florida saw a surge of coronavirus cases. As of Monday, Orange County had seen more than 5,000 cases of coronavirus, with Florida now seeing more than 100,000.

Pictured: Florida Rep. Anthony Sabatini, who has filed a lawsuit against Orange County, Florida against the bill that make it mandatory for residents to wear masks in public places. He claims that it is unconstitutional and infringes on resident’s rights

Sabatini called a news conference on Monday to announce the lawsuit against the country, and saw dozens of people who oppose the order in attendance.

‘We have a loud and unapologetic message that we have to send to the elected officials of Orange County, and that is this: that you have to follow the law and follow the constitution and not invade the private rights of people,’ Florida Republican legislator Sabatini said in a news conference on Monday.

He described the mandatory order as ‘vague’, ‘illegal’ and ‘utter nonsense’.

In a tweet, he shared an image of the bill, specifically the section that lists the exceptions to the law, highlighting that the law appears to not apply to government employees.

‘You can’t make this up!’ he wrote. ‘Did you know the unlawful Orange County mask mandate, Emergency Order 2020-23, doesn’t apply for “government employees?” 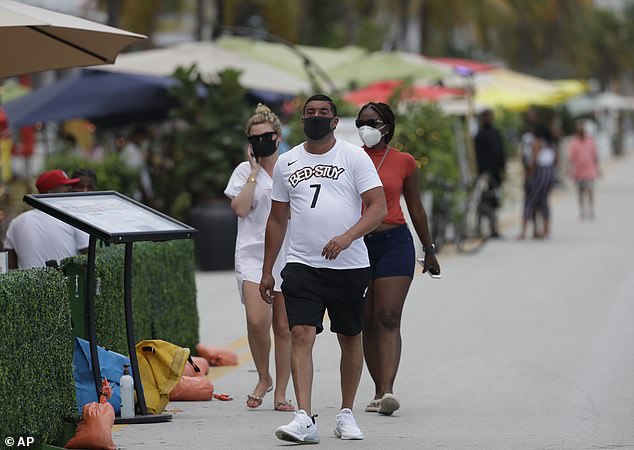 Carl Jackson, the plaintiff in the lawsuit, said that the order makes doing his job as a businessman and entrepreneur difficult.

‘They’re trying to use COVID-19 to infringe on our rights,’ Jackson said, according to WFTV9.

Jackson’s legal team have said they are looking to get Orange County to change the law to allow people to choose themselves whether or not to wear a mask.

Speaking to FOX 35 Orlando, attorney behind the lawsuit said that would happily drop the lawsuit if Demings changed the word ‘required’ to ‘recommend’ in the order requiring masks. 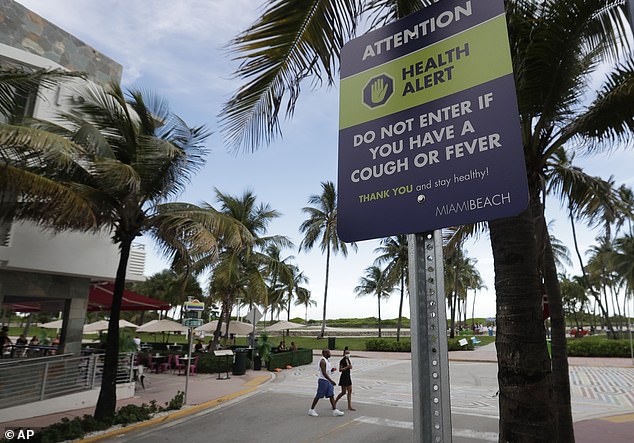 Pictured: A couple walks past a sign asking people not to visit Miami Beach, Florida’s famed South Beach if they have a cough or fever, Monday, June 22, 2020

Speaking on Monday during a news conference, Mayor Demings described the mask order as a ‘measured approach’ to help prevent the spread of the virus.

‘I still believe that what we’re doing is a measured approach to responding appropriately,’ Demings said, adding that the order will help stop the spike of new cases.

‘The decisions we’re making here on the local level are apolitical,’ he said. ‘It has nothing to do with party affiliation. It has to do with putting the needs of the people first.’

Dr. Raul Pino, Orange County Medical Officer, said during the same news conference that wearing a mask is a way to protect yourself while also being respectful to others.