Stunned doctors removed a leaking cigarette lighter from the stomach of a 49-year-old man who complained of tummy pains.

The anonymous patient, from Florida, suffered from schizophrenia and had a habit of swallowing strange objects, including a spoon.

But medics behind the extraordinary case believe it is just the third time in history that a cigarette lighter has been ingested.

It caused him severe bouts of vomiting and stomach pains, which led to him seeking urgent medical attention.

He presented himself to doctors at the University of Florida College of Medicine’s emergency department.

Scans revealed ‘a foreign body resembling a cigarette lighter visualized within the stomach’, the team of doctors said.

During the operation to remove the lighter, they found a hole in his stomach lining due to the lighter having leaked in his tummy.

It is believed that the fluid tore away at the mucus, which is the protective layer that separates the stomach lining from stomach acid.

This allowed the patient’s stomach acid to eat away at the gastric tissue, leading to the small opening that caused him intense pain.

The first case of its kind

Writing in Case Reports in Emergency Medicine, they stressed this was the first case of its kind, because the lighter leaked within the body.

Doctors removed the lighter, giving the hole in the stomach lining, otherwise known as an ulcer, the chance to heal.

It had healed completely by the time he went for his check-up appointment two months later, the case report revealed. 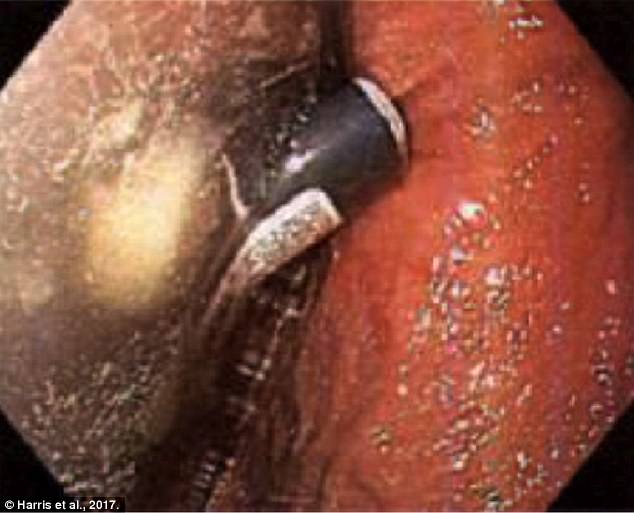 The anonymous patient, from Florida, suffered from schizophrenia and had a habit of swallowing strange objects, including a spoon. (pictured: the lighter) 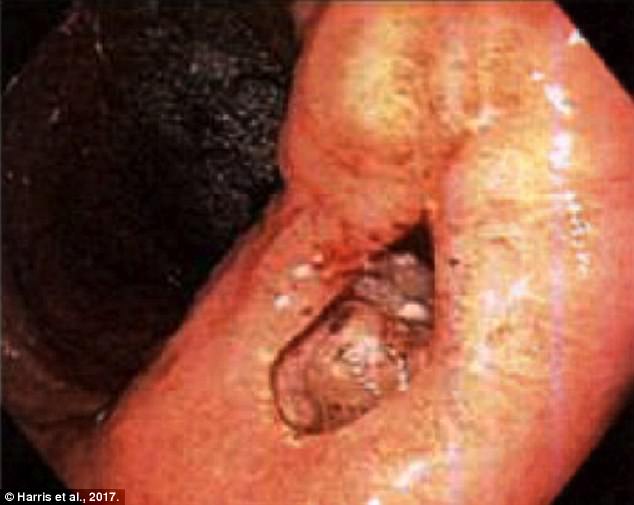 During the operation to remove the lighter, they found a hole in his stomach lining due to the lighter having leaked in his tummy

Dr Asim Shuja, a gastroenterologist who treated the man, told LiveScience: ‘Ulcers from foreign bodies are not that common.

‘Our patient had a history of ingesting objects like spoons [and] razor blades in the past.’

Coins and bones are the objects most commonly ingested.

Normally, the objects are passed naturally, but there is a high risk thin, sharp objects can perforate parts of the body such as the bowel.

If the object is too big to be removed in an endoscopy, doctors may have to operate.

Surgery such as a laparotomy – where medics make an incision into the abdomen to remove the object from the bowel – is required in less than 1 per cent of cases where people ingest foreign bodies.

During the former episode, the patient was hospitalised and required treatment.

The dangers of swallowing objects

Dr Rishi Goel, a gastroenterologist at Kingston Hospital, London, told MailOnline: ‘Swallowing foreign body objects can be incredibly dangerous and can lead to significant injury to the gastrointestinal tract.

‘Objects such as batteries, pins, buttons, etc may cause minor injury to the gut and can cause ulceration as seen in this case.

Small objects may pass through the gut safely, however, sharp or dangerous items may need to be removed with an endoscope.

‘Any damage to the gut which is bleeding may be treated with endoscopic treatment.’

This bizarre case comes after MailOnline broke the news of a postman who inhaled a Playmobil cone that was lodged in his lung for 40 years.

Paul Baxter, from Croston, Lancashire, was suspected to have cancer after doctors found a mass in the ex-smoker’s lungs.

Tests at first appeared to confirm their fears – until they inserted a tiny camera to look at the suspected tumour. They burst into laughter when they saw.

What they believed was a malignant growth turned out to be a toy plastic traffic cone from a Playmobil set he received as a seventh birthday present.