Florida school shooter bought AK-47 less than a month ago

Teen killer Nikolas Cruz purchased an AK-47 assault rifle from a gun store in Deerfield Beach, Florida, less than a month ago and passed all the relevant background checks, DailyMail.com can reveal.

Cruz, who slaughtered 17 of his former teachers and classmates at the Marjorie Stoneman Douglas High School in Parkland, also bought a shotgun from Gun World of South Florida in 2016.

Speaking exclusively to DailyMail.com, owner Kim Waltuch, 54, of Parkland, said Cruz had done nothing to arouse suspicion during the purchase process and had appeared normal to her staff.

‘He was not a regular customer of ours. He did purchase firearms from us but it was not the AR-15 [thought to have been used in the killing spree].

‘We went through the process of the background checks which is the only way we release a firearm. He was immediately approved.’ 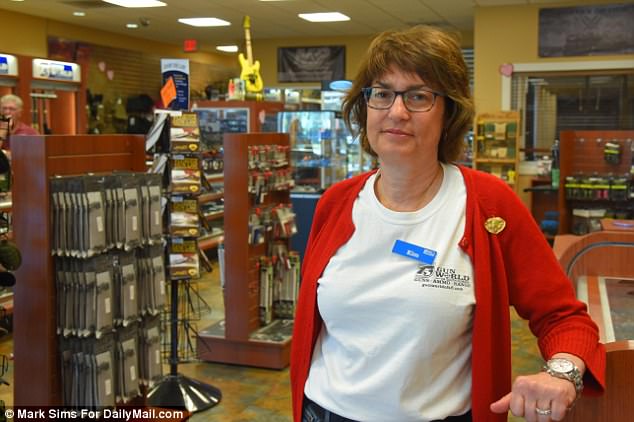 The AK-47, also referred to as a Kalashnikov, is a semi-automatic assault rifle that was originally designed for use by the Soviet Army and was first fired in 1948.

Prices start at around $400 and go up to $1,000 depending on the model. A similar weapon to Cruz’ that was seen on sale at the Deerfield Beach store on Thursday was priced at $869.99.

The AK-47 was not used during Cruz’ killing spree – with the killer selecting a AR-15 semi-automatic rifle, understood to have been purchased from a branch of local chain Shoot Straight, instead.

A chain with eight stores across Florida, it has branches in Fort Lauderdale and West Palm Beach – the latter close to the Lantana trailer park where Cruz, 19, is thought to have spent his last four months. 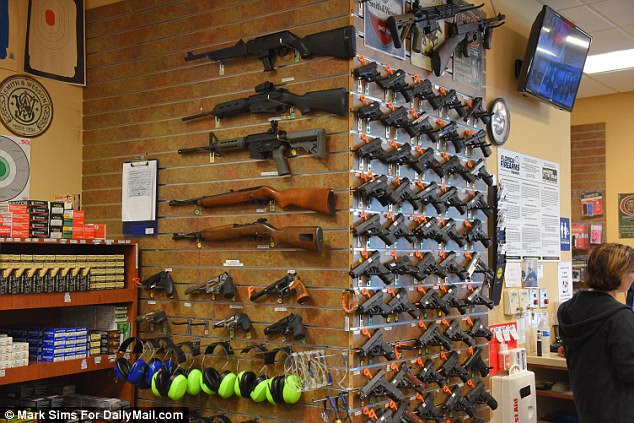 Inside Gun World where Nikolas Cruz, purchased a shotgun and an AK47 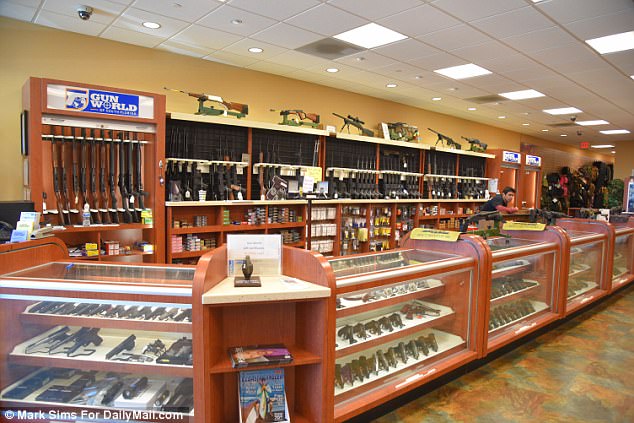 Tragically, some of the store’s regular customers were among Cruz’ victims. Inside Gun World above 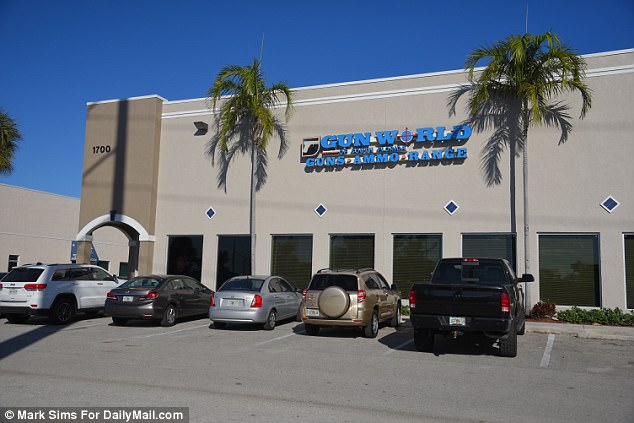 ‘He was not a regular customer of ours. He did purchase firearms from us but it was not the AR-15 [thought to have been used in the killing spree],’ said the owner of Gun World. The exterior of the store is seen above

Approached by DailyMail.com at the West Palm Beach store earlier today, staff did not deny that the gun had been purchased at a branch of Shoot Straight but refused to comment and directed enquiries to a corporate phone number.

Cruz is understood to have bought numerous guns in the years prior to the killing spree and, former classmates said, regularly pestered them for their opinion on his potential purchases.

Joshua Charo, 17, told DailyMail.com: ‘He usually liked to talk about hunting, guns, stuff like that – that particular subject.

‘He always showed people the guns he wanted to buy and he would always ask if they had any suggestions for which guns they thought would be better and stuff like that.’ 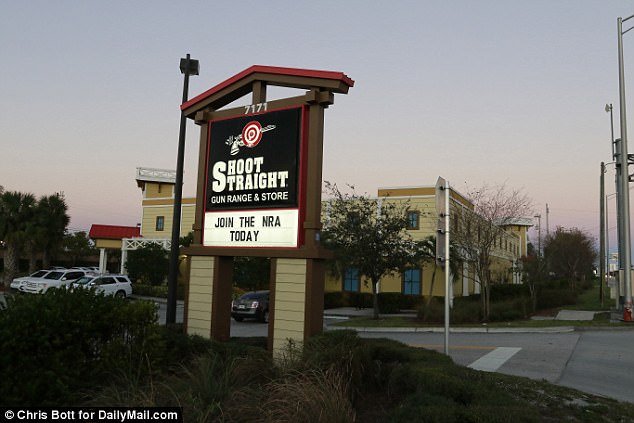 The AK-47 was not used during Cruz’ killing spree – with Cruz selecting a AR-15 semi-automatic rifle. It is understood to have been purchased from a branch of local chain Shoot Straight. Pictured is the West Palm Beach branch 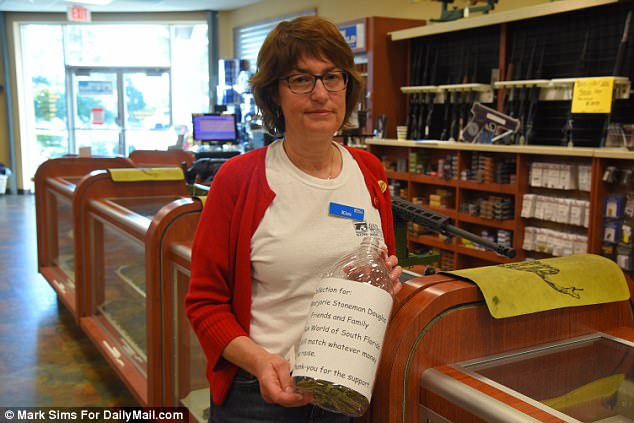 Waltuch, who was left visibly upset by the news of the shooting, said she had not yet been contacted by the ATF over Cruz’ purchases but expects to speak with agents in the coming days. 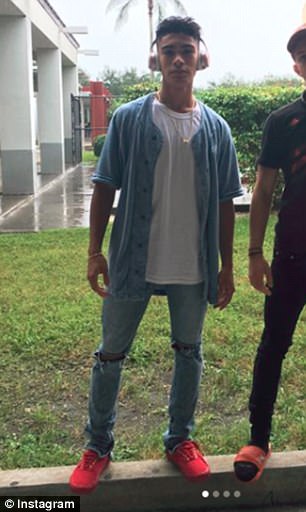 Joshua Charo (pictured) 17, of Parkland, Florida, said he knew Cruz for two years in high school and described him as ‘odd’

‘The families who are in distress – that’s the priority. ATF will do their job as they do – thank God all our papers are in order. I have nothing to worry about.’

Tragically, some of Waltuch’s regular customers were among Cruz’ victims and she has since begun a fundraising drive to help their families.

‘He [Cruz] was not a regular customer of ours, he had only been here twice,’ she told DailyMail.com.

‘We did have some of the students and a teacher [who died] that were customers of ours. It’s a neighborhood range, we are only 20 minutes from Parkland, Coral Springs.

‘I have people here from Boca, Deerfield – I’m the center and the closest range for everybody near here.’

She added: ‘My heart breaks for the families. We at Gun World are all about giving back, whether it’s for hurricanes, breast cancer – we give to the local charities.

‘So in this case, whatever we collect from all of our customers, we will, Gun World of South Florida, will match and it will go to the families of Stoneman Douglas.’

The mother-of-two also said she believes strongly that there should be more checks to screen out those with mental illnesses and said concealed carry permits should be renewed every four years instead of every seven.

Waltuch said: ‘I believe you have the right to have a concealed weapons license. But I do believe that a lot happens in seven years and I do think that every four years, there should be a recheck. 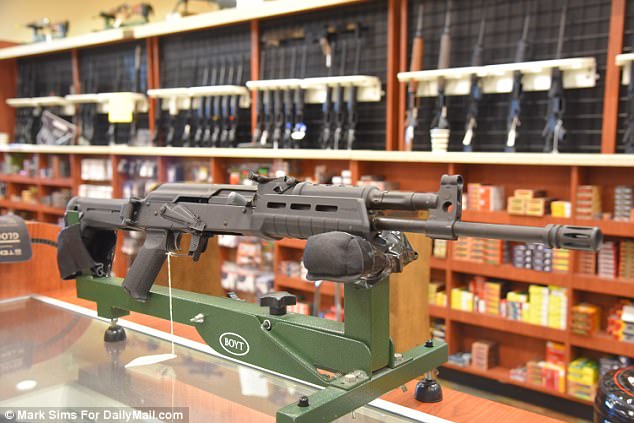 Prices start at around $400 and go up to $1,000 depending on the model. A similar weapon to Cruz’ that was seen on sale at the Deerfield Beach store (above) on Thursday was priced at $869.99 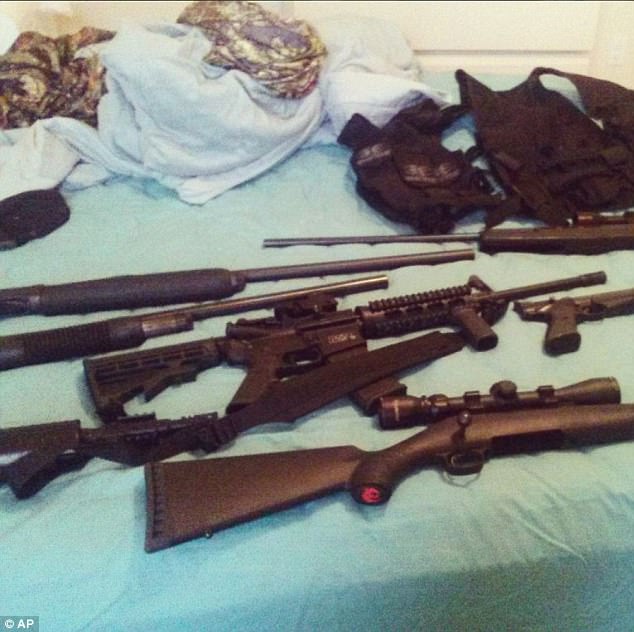 Arsenal: This picture shows the wide variety of weaponry owned by Nikolas Cruz – including an AR-15 – center and what appears to be a handgun on the right of the picture 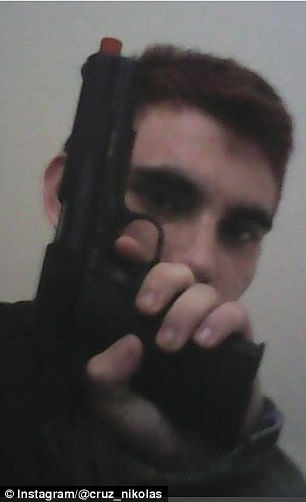 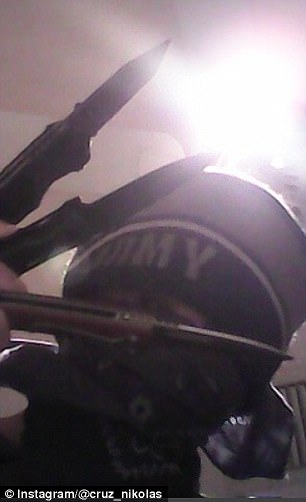 Cruz, 19, was trained to use weapons and had taken a marksmanship course with the US Army Junior Reserve Officers’ Training Corps, a former friend has revealed

‘You should have to apply again so they can make sure that everything hasn’t changed. I do believe that. Strongly.’

The 54-year-old, who was a pre-school teacher for 19 years before taking over her late husband’s store three years ago, added:

‘I think sadly that schools need to protect their students. When you’re a teacher, you take on that responsibility.