Florida woman flew across U.S. to win over man she loved but ended up heartbroken in a motel

A Florida woman documented on Twitter how she flew across the country to win over the love of her life – but ended up heartbroken.

Rebecca Renner, 31, posted a series of tweets as she prepared to fly from Orlando to declare her love for a man named Francois Wolmarans before ultimately finding herself alone in a ‘sh*tty’ motel in Ashland, Oregon.

‘Last night, a personal tragedy reminded me that life is uncertain and too godd**n short. So I booked a plane ticket, and I’m about to fly across the country to tell the love of my life how I feel. Wish me luck!’ she wrote on Friday.

She added: ‘And don’t wait another day to tell those you love that you love them.’

Rebecca Renner, 31, posted a series of tweets as she prepared to fly from Orlando to declare her love for a man named Francois Wolmarans 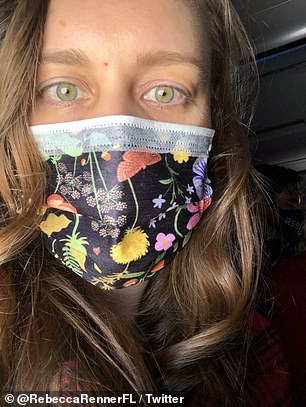 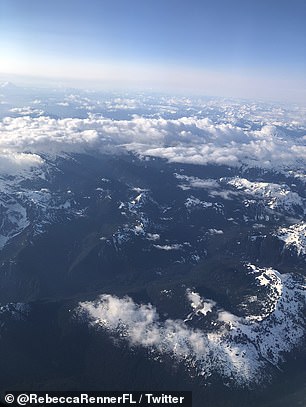 Renner, left, posted excited photos about the adventure from the plane on Twitter 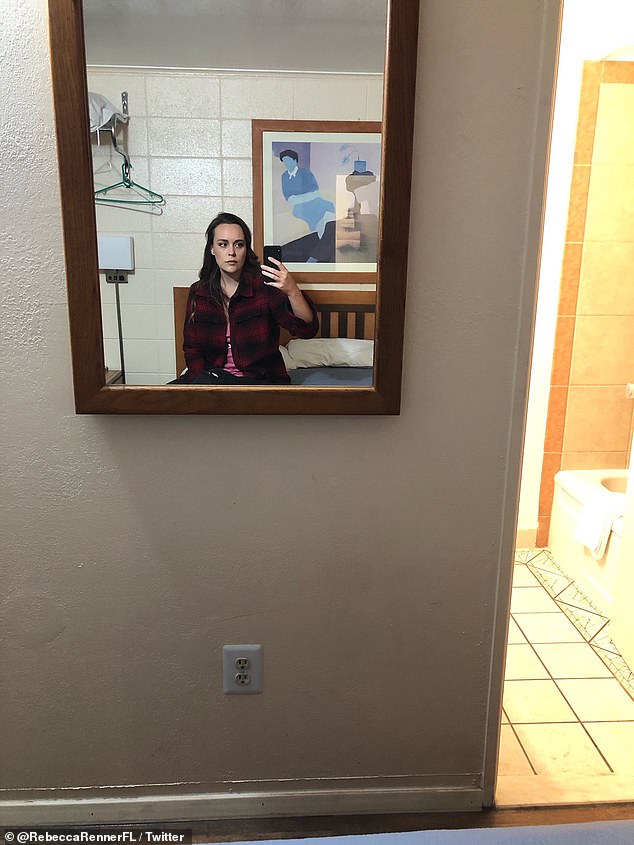 Renner utimately finding herself alone in a ‘sh*tty’ motel in Ashland, Oregon

People on Twitter were quick to express wonder at her ‘romcom moment’ and wished her good fortune on her ‘wonderful adventure.’

‘I have lived an entire romance novel in the past month, down to the plot structure. it’s truly wild,’ Renner responded to someone who had commented on the thread.

Renner also posted pictures of herself on the flight with the caption: ‘I’m not there yet. One more flight to go!’

When someone on Twitter asked for further detail about Renner and Francois’ backstory, she linked back to tweets indicating that the pair had recently run off together on a road trip to the Grand Canyon.

She wrote on May 3: ‘Last week, I ran off on an road trip with someone I thought I was falling in love with. I saw the Grand Canyon for the first time. Then things started to implode.

‘Now I have an epic story about how the chance I took on love unraveled as I sped in a Mustang down Route 66,’ she added.

Two weeks later, on May 16, she indicated he was going to visit her in Florida’s Everglades – calling it a ‘plot twist.’

Then, before touching down in Oregon on Friday, she wrote that the two kept kept talking after the Route 66 trip.

‘He tried to fix me up with someone bc he wanted me to be happy. I was conflicted for a while. Then I realized the choice was obvious,’ she tweeted.

However, her followers were surprised by a significant turn of events less than 24 hours later when Francois rejected her.

‘Well, this is me in my sh*tty motel room after getting rejected. I don’t know whether to be sad or angry, but I’ll live to love another day. Hopefully that love will be for someone who values it. Sorry to disappoint you, Twitter,’ she wrote.

One Twitter user appeared to side with Francois, writing: ‘And the people calling HIM the a**hole are genuinely confusing me. Unless he was leading her on behind closed doors, he did absolutely nothing wrong.’

‘He was,’ she responded. 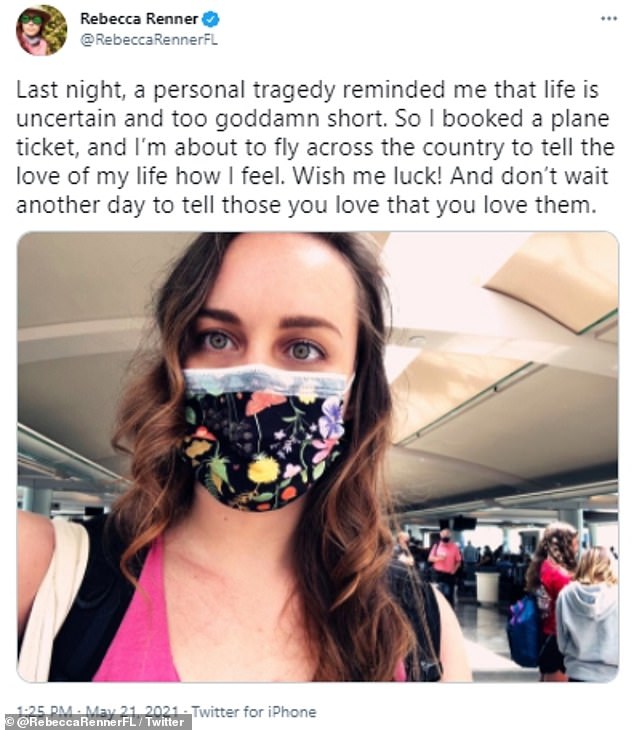 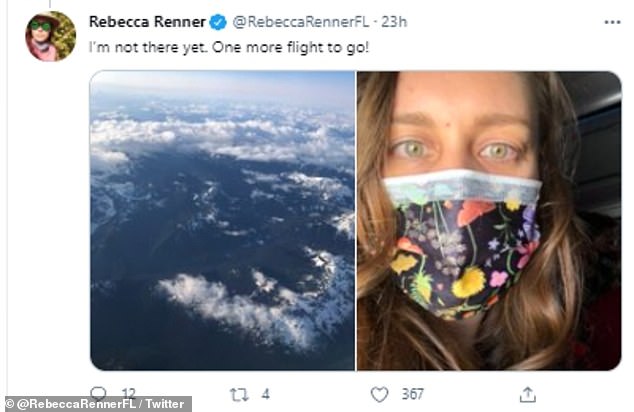 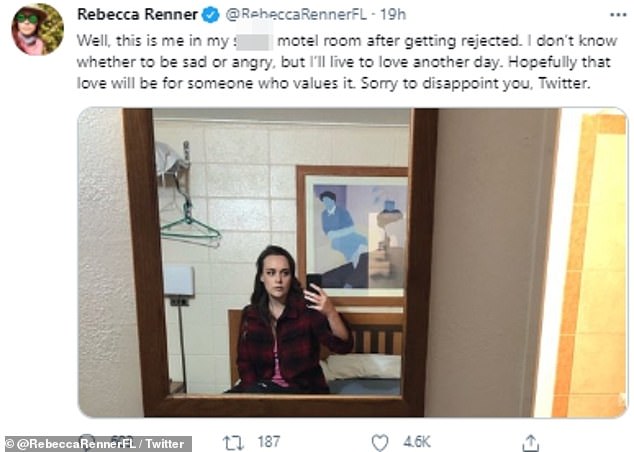 Renner, a contributor to National Geographic, tweeted her saga of unrequited love which went viral 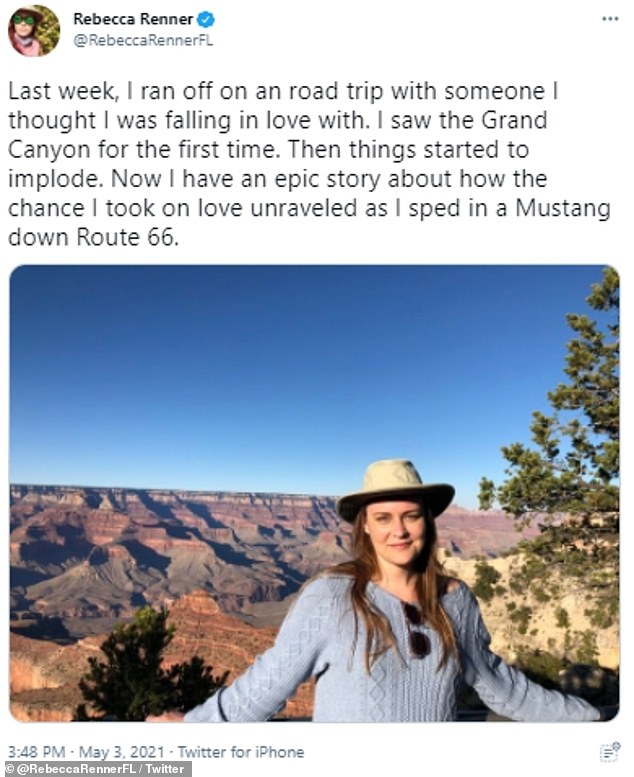 She later indicated that he had been leading her on behind closed doors, but said that the two had decided to forgive each other and got breakfast together

Renner, a contributor to National Geographic, told the New York Post in an interview after the tweets went viral that she asked him if the pair could ‘try again’ for a relationship and that they had dated earlier in the year.

‘I asked him if we could try again and he said no. So much worse has happened in life than somebody saying no to me. My heart is a little broken, but it will mend,’ she told the outlet.

Renner also revealed that the her and Francios met for breakfast and that the story may have a happy ending with two forgiving each other.

‘We both think it’s worth it to make an effort to be kind,’ she told the outlet.

She also said she was ‘really surprised’ by the outpouring of support she received on Twitter as others recounted their own stories of ‘making big leaps and having failed.’

‘It makes me feel better that this touched so many people. That wasn’t my intention. I was just throwing something out there online,’ she said.

‘To have so many people tell me about making big leaps themselves and having failed, only to later meet the real loves of their lives, that feels really powerful to me.’

DailyMail.com has reached out to Renner for more information and additional comment. Contact information for Francois was not immediately available.