Florida woman slammed for checking in at Irma and filming

A woman from Florida has been slammed for checking in at Hurricane Irma on Facebook and filming the carnage of the storm from her car.

The online user from Tavernier, who MailOnline is not naming, was one of more than 360,000 people to check in to the event on the social media site which was set up as a safety information sharing platform.

But the woman took the title literally and sat out in the raging winds filming as the water can be seen rising around her.

Having posted the video online using Facebook Live, users mocked her decision not to lock herself indoors along with the majority of Florida, with one sarcastically posting: ‘Congratulations – you’ve been nominated for the Darwin Awards. Please remain in your vehicle and our representative will attend your funerals.’

The online user, who MailOnline is not naming, was one of more than 360,000 people to check in to the event on the social media site which was set up as a safety information sharing platform

Hurricane Irma has now made landfall on Florida, slamming into Key West, bringing sustained winds of 130mph, as well as rain and threats of tornadoes in what is expected to be one of the worst storms to hit the area in living memory.

The state thought it had escaped the worst case scenario as the storm moved into land and was downgraded to Category 3 – but late Saturday night it re-energized and was upgraded back to Category 4, the second-worst level, with gusts of up to 144mph.

And this is only the beginning for the mainland US, as Irma is set to move inland northwest, threatening Naples and other cities up the west coast of Florida as the wears on.

A man was killed after tropical-storm-strength winds caused him to lose control of the truck he was driving through Monroe County, which contains Key West. He had been carrying a generator, local officials told ABC News.

Two others died in a car accident in Hardee County, Florida, the Florida Highway Patrol said. The area is around 60 miles inland from Sarasota.

Those deaths come after Irma claimed at least 25 lives in the Caribbean as it swept over several countries, destroying entire islands. 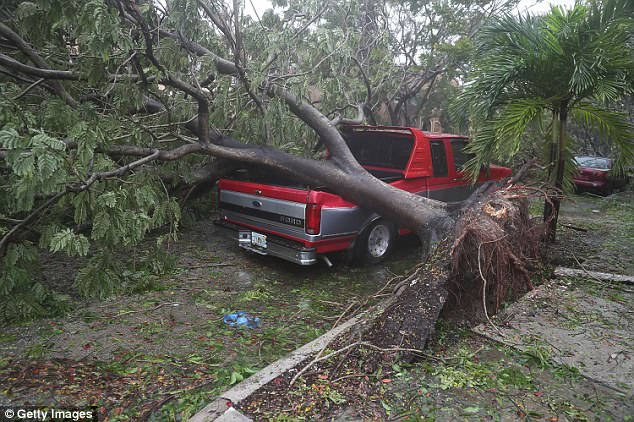 A tree is seen toppled onto a pickup truck in Miami after being battered by Irma’s winds. Flying debris is an omnipresent danger for those outside in the terrifying weather 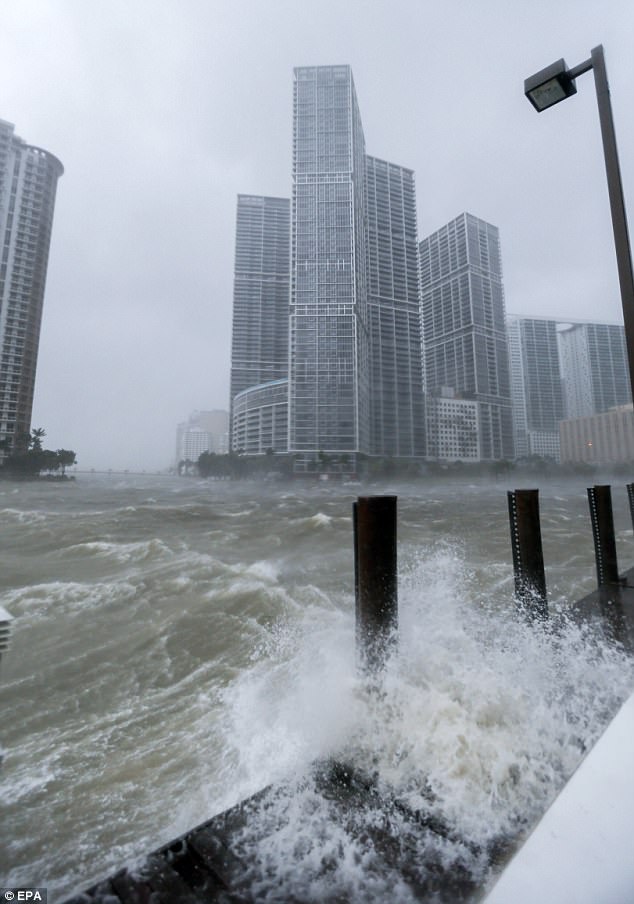 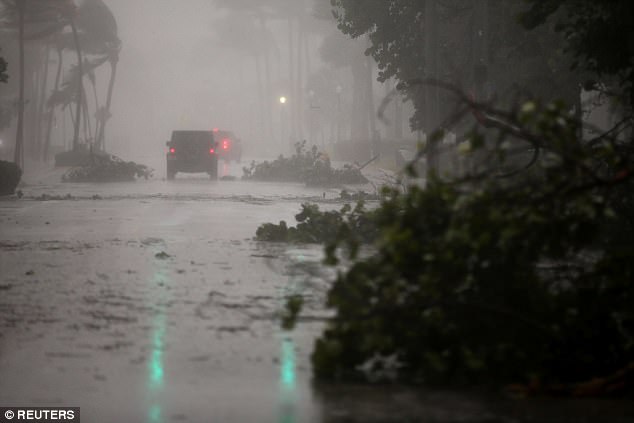 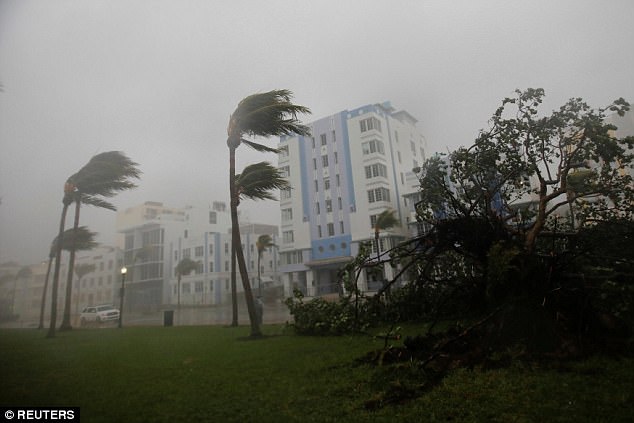 Miami’s famed Ocean Drive was slammed by Hurricane Irma’s winds and rain as it made landfall at around 9am Sunday, following hours of increasingly dangerous weather 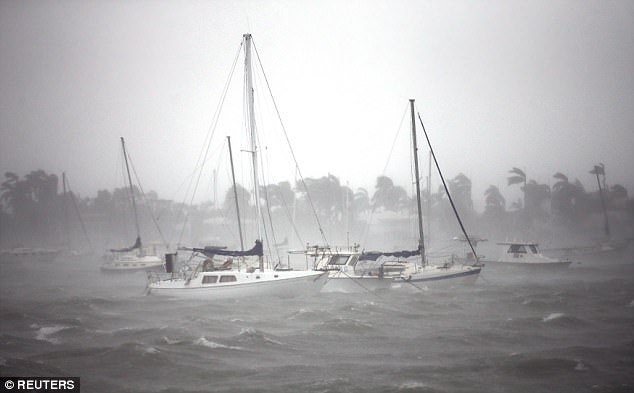 Boats are tossed in the churning seas of South Beach Miami as Irma sweeps unstoppable over the coastline. The Category 4 hurricane has already hit all of the Florida Keys

As the hurricane moves up the west coast, experts have warned that there will be a negative surge of three or more feet, water is pulled out into the sea.

That might look like the hurricane is subsiding – but it’s just a prelude to the real surge, which will push huge amounts of water towards the land.

On Sunday, the National Weather Service (NWS) in Key West has issued stark warnings to Miami’s residents, saying that emergency services – just a few of whom remain on the largely empty roads – would not be able to help anyone during the worst of the storm.

First responders are told to seek shelter as soon as winds reach 40mph or more, as safe movement through the streets becomes impossible.

The NEWS is also warning locals not to return to the city even when the winds move on – at least until authorities have given the all-clear that roads are safe for travel.

At 5:40am, the NWS said: ‘Extreme, hurricane-force winds are imminent in the Lower Florida Keys. If you are here, please go to interior room away from windows.

‘Treat these imminent extreme winds as if a tornado was approaching and move immediately to the safe room in your shelter. Take action now to protect your life. You should already be taking cover.’

Forecasts predict winds of up to 130mph and will rip through southern Florida as it travels between 6mph and 8mph up the western coast of the state.

‘958mb Barometric Pressure right now in #KeyWest,’ tweeted National Geographic’s Mike Theiss , as he posted videos of the oncoming storm. ‘We are getting pounded in western eyewall !!! #Irma’

Donald Trump sent a message to those caught up in the brutal hurricane, saying: ‘This is a storm of enormous destructive power, and I ask everyone in the storm’s path to heed all instructions from government officials.

‘The US Coast Guard, FEMA and all Federal and State brave people are ready. Here comes Irma. God bless everyone.’