Floyd Mayweather dresses like a cowboy to watch LA Lakers

Floyd Mayweather rarely likes to keep a low profile and as he sat courtside at the Staples Center on Friday night to watch the Los Angeles Lakers, few could divert their eyes from the legend’s attire.

Channeling what he described on his Instagram as his ‘cowboy swag’ – it seemed closer to Woody from Toy Story – Mayweather witnessed a Lakers victory over the Dallas Mavericks.

The former five-weight world champion is embracing his retirement now talk of a UFC bout with Conor McGregor has been quashed.

Mayweather was sporting black boots, black jeans, a green shirt, a jacket and a black cowboy hat for the match.

Captioning the photos on his official Instagram, Mayweather said: ‘I heard Chris Paul had his cowboy swag on today and so did I. I guess great minds think alike, be outside the box.’

The boxer is a big basketball fan and was at the Staples Center recently for the NBA All Star event where he sat next to DJ Khaled.

While that event paid much to the iconic names of the sport, Mayweather will have been impressed by Julius Randle who stole the headlines – even away from the boxing legend.

Randle notched his fifth career triple-double with 18 points, 12 rebounds and 10 assists as the Lakers beat the Dallas Mavericks 124-102. 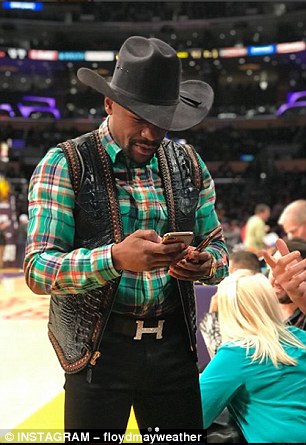