Flu jab that stops most deadly strains is trialled on NHS

A flu jab which protects against all of the most deadly strains is being trialled on the NHS for the first time.

British scientists hope it will be far more effective than the existing vaccines which only prevent a few types of flu virus.

Currently, flu jabs are manufactured every Spring based on which strains of the virus are likely to be the most common that following winter.

But the viruses tend to mutate in the eight month time lag between the vaccines being produced in March and the flu season beginning in November.

This means they often provide little protection – particularly for the elderly who are more susceptible to aggressive flu strains.

Scientists from Oxford University have developed a vaccine to prevent all ‘Influenza A’ strains of the flu virus, which are the most deadly.

They are now recruiting between 500 and 2,000 patients over 65 to take part in what will be the world’s first ever trial.

If the vaccine proves effective, patients would only need to have it once every five years – possibly less – rather than annually.

‘We want to improve the situation, but in order to do that we need volunteers to help us test a new vaccine. If you are invited to take part, please consider doing so.

‘The flu vaccine efficacy isn’t very good and we need to improve it.’

Under a microscope, the flu virus looks like a cushion which lots of pins sticking out of it.

The problem with the current vaccines is that they only provide immunity against the pins, which have the tendency to mutate every year. 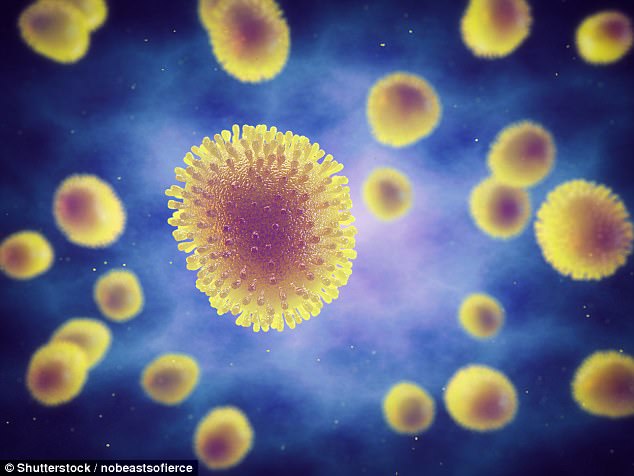 Under a microscope, the flu virus looks like a cushion which lots of pins sticking out of it (stock photo)

This new vaccine targets the cushion – the body of the virus – which rarely changes between seasons.

Last month the head of the NHS Simon Stevens said a particularly aggressive strain of flu was on its way to Britain from Australia and the Southern Hemisphere.

He urged hospitals to free up at least 3,000 beds over the next six to eight weeks by discharging bedblocking patients.

Its own analysis showed that the over 65s who had the jab were only 6 per cent less likely to get the virus than those who hadn’t been immunised.