The virus substantially increases sufferers risk of a heart attack for up to a week and stroke for up to one month after they become infected, the research adds.

Suffering from a respiratory infection, which can also include pneumonia, causes inflammation, which can lead to blood clots and subsequent cardiovascular events, a study found today.

To put the findings into context, lead researcher Dr Charlotte Warren-Gash, from the London School of Hygiene & Tropical Medicine, said: ‘In Scotland, among those aged 75 years and above, around two in 10,000 people have a heart attack each week.

‘Our analysis found this figure rose to 10 in 10,000 in the week after having a respiratory infection.’

Researchers believe their findings highlight the importance of being vaccinated against flu and pneumonia, particularly among vulnerable people, such as the elderly or those with pre-existing heart problems.

The life-threatening Aussie flu epidemic earlier this year contributed to NHS bosses making the unprecedented decision to cancel 55,000 operations to cope with the so-called winter crisis.

Understanding who is at risk may lead to interventions

Dr Warren-Gash said: ‘Heart disease, strokes and lower respiratory infections have been the three leading causes of death globally for over 15 years, and are important public health problems that affect large numbers of people worldwide.

‘As people age, having more than one medical condition becomes more common, so it is even more important to understand the links between different diseases.

‘If we can understand who is at risk of these cardiovascular complications after respiratory infections, we can potentially intervene to prevent them, with methods such as vaccines.’

Results further suggest the cardiovascular risks of respiratory infections are greatest in those over 65.

Dr Warren-Gash added: ‘For most young, healthy people, the risk of heart attacks and strokes occurring after a respiratory infection is low.

‘This research is particularly relevant for those over the age of 65, as well as people with pre-existing heart diseases, as these groups are at higher risk of heart attacks and strokes.’

The findings were published in the European Respiratory Journal.

Highlights the importance of vaccinations

The study did not assess less common respiratory infections or how they specifically affect people of different ages.

Dr Warren-Gash said: ‘Our research highlights the importance of ongoing work into which doses of vaccine are best to protect people from heart attacks and strokes.

‘Although flu and pneumonia seem to have the biggest impact, this research also shows that a group of other respiratory viruses had some triggering effects.

‘We don’t currently have vaccines for these viruses so further research is needed.’ 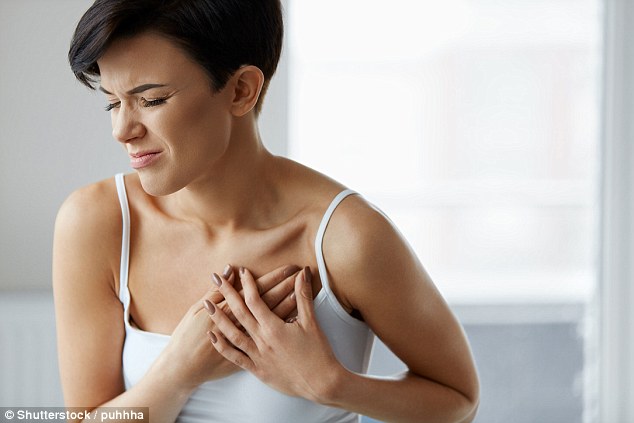 Suffering from a respiratory infection, which can also include pneumonia, causes inflammation, which can lead to blood clots and subsequent cardiovascular events (stock)

They identified 1,227 adults who had suffered their first heart attack and 762 who had one stroke, as well as a respiratory bacterial or viral infection, between 2004 and 2014.

The rate of cardiovascular events in the stages immediately after a respiratory infection were compared against those that occurred at other times.