Foodies have been left divided by a new recipe that suggests grilling whole sunflower heads and eating them like corn on the cob.

Thousands of people took to the comments on Facebook to share their thoughts on the unusual use of the popular summer flower.

Usually grown by young children in their gardens as a school project or dissected for its edible seeds, the latest incarnation is the sunflower as you never expected to see it. 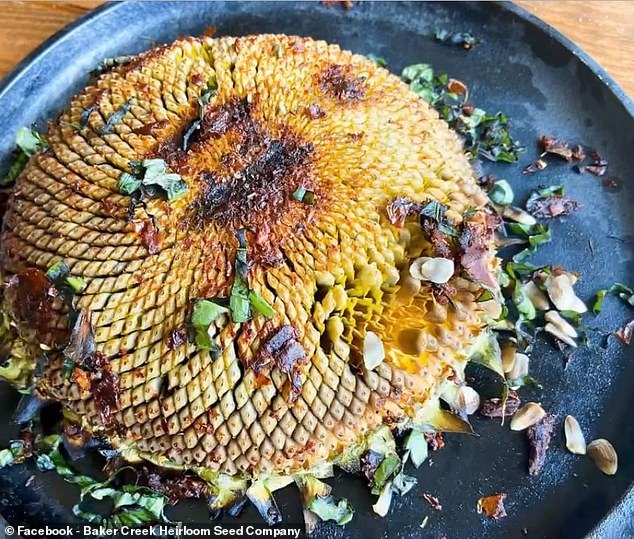 The recipe was shared by the Baker Creek Heirloom Seed Company based in Mansfield, Missouri

While some adventurous cooks said they were keen to try out the inventive use of the plant, others were less than convinced.

To create the dish shared by Baker Creek Heirloom Seed Company, based in Mansfield, Missouri, the sunflower must be picked when the seeds have formed but still have soft shells.

All the petals are removed and it is coated in oil from a jar of sun-dried tomatoes before being placed face down on a hot grill plate. 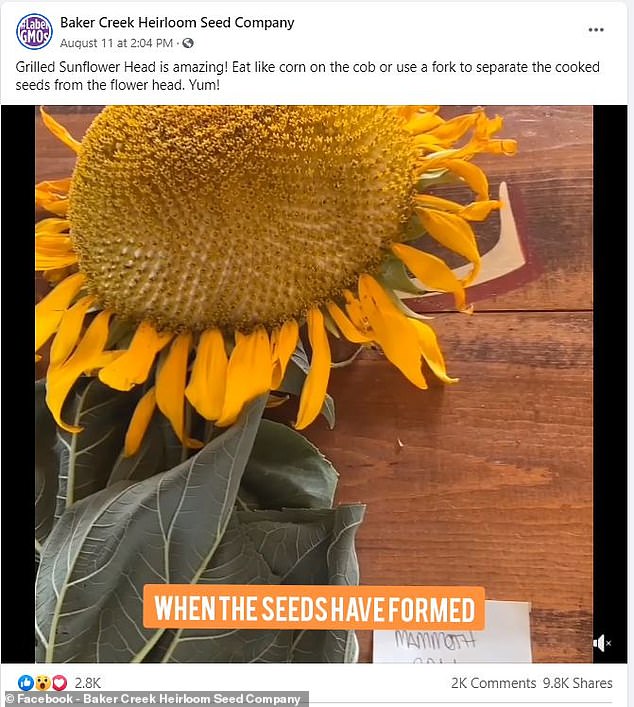 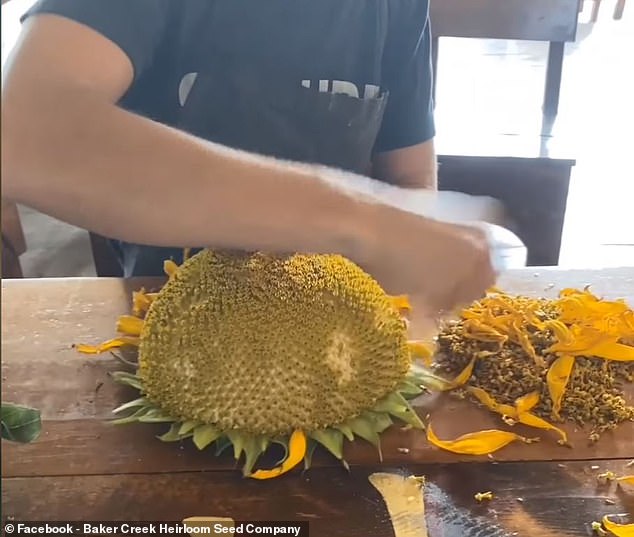 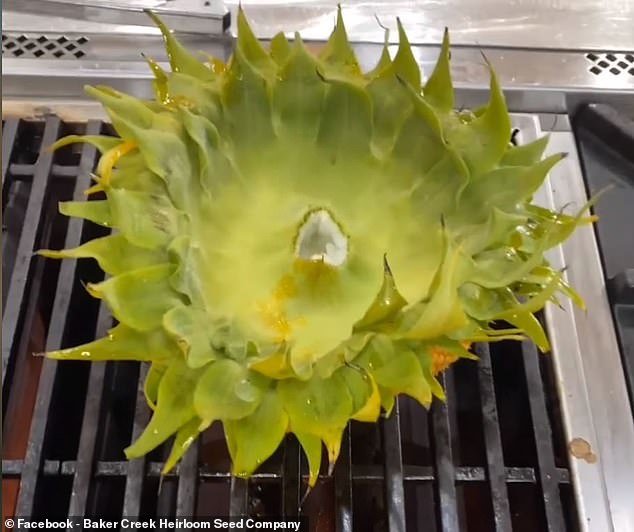 It is then covered and left to cook for five minutes before being coated in sun-dried tomatoes and basil.

Once the few simple steps are followed it is possible to pick it up with your hands and nibble on it just like people do with corn on the cob.

Hundreds of foodies said they had never considered eating the head of a sunflower but were thinking about trying it out. 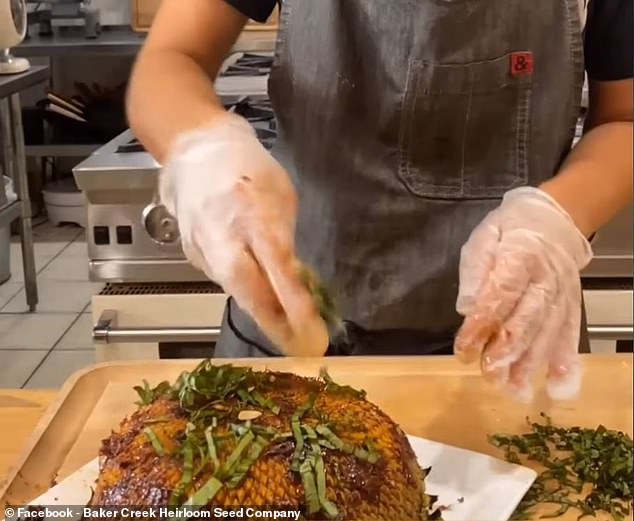 It is then smothered in sun-dried tomatoes and basil. The chef picks up the large sunflower head and eats it with her hands 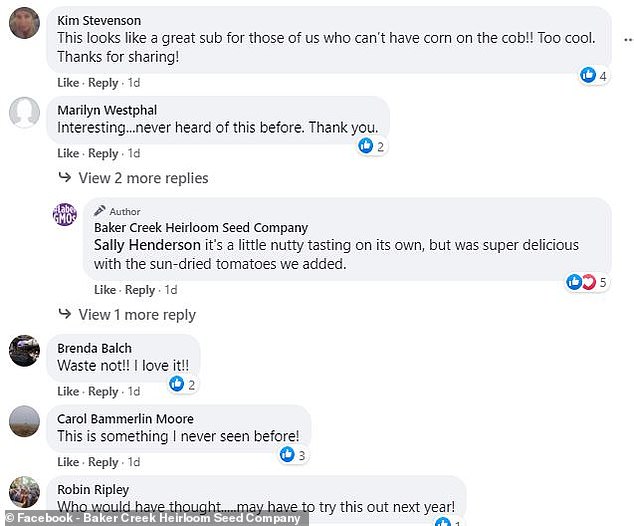 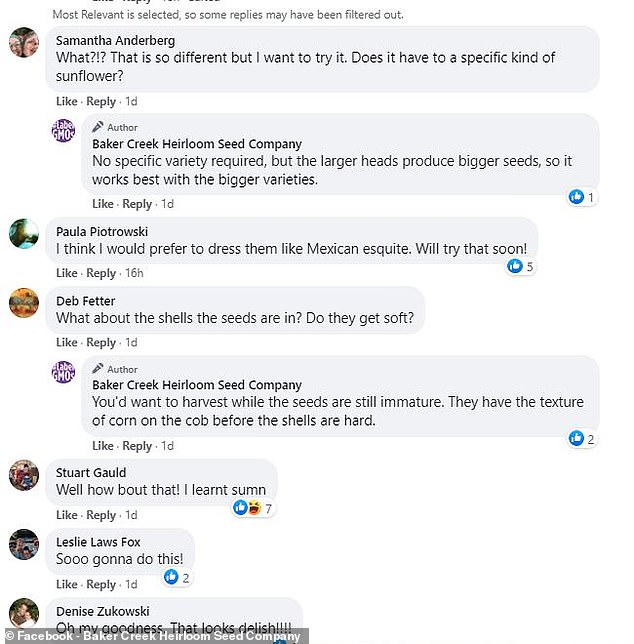 The reaction to the unique recipe was mixed, with some people keen to try it out and others unaware it was possible to eat the head

Maja Roberson said: ‘I love sunflower seeds but I never even thought about eating them like that.’

Echoing her sentiment, Marilyn Smith said: ‘I’ve tried all kinds of exotic food but I never thought I could eat sunflower like grilled corn.’

Equally as intrigued by the unusual snack was Susan Emelia: ‘I love sunflower seeds and like tomato basil so it’s probably a win for me.’ 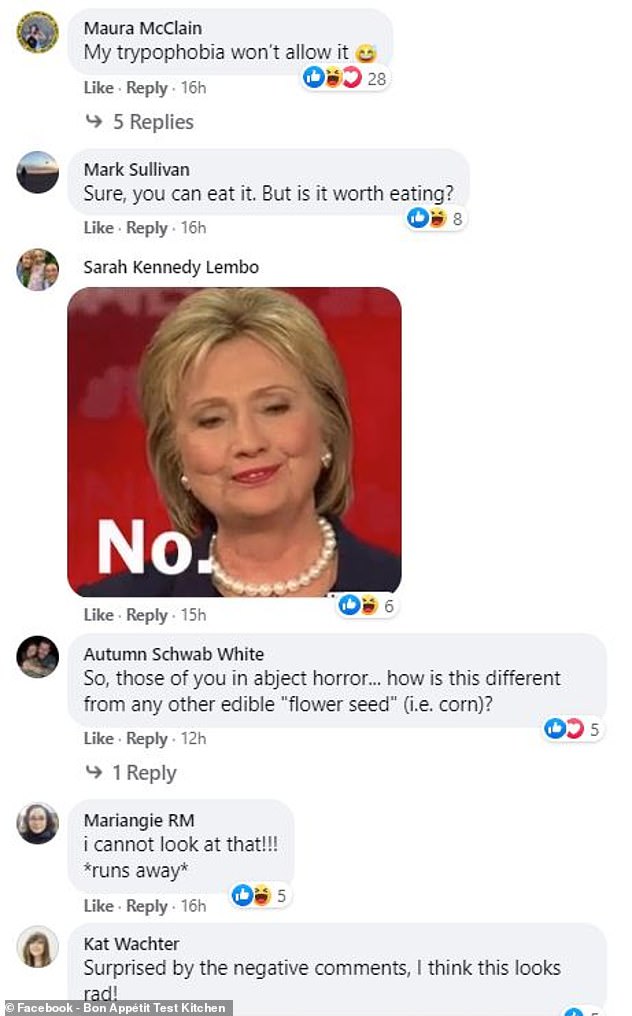 When asked if the whole head tasted the same as the sunflower seeds people are used to, the seed company said: ‘They’re nutty tasting, but still tender like corn when harvested while immature.’

One keen chef said the sunflower head sounded delicious but floated the idea of rubbing it with garlic instead of sun-dried tomatoes.

But when the post was shared on food lover group Bon Appetit Test Kitchen, others were not so impressed with the adventurous food. One person commented: ‘I cannot look at that.’

Another said: ‘I would freak out. Nope’

Several people also joined in the conversation to say the recipe had triggered their trypophobia – an aversion to the sight of irregular patterns or clusters of small holes or bumps.

More than 2,000 people waded in on the debate and to voice their opinions on the surprisingly controversial recipe.