Video footage has emerged of Kansas City Chiefs running back Kareem Hunt kicking and shoving a 19-year-old woman during an altercation at a Cleveland hotel back in February.

Hunt was never arrested by police, nor was he suspended by the NFL, but reports of the woman’s assault accusations against the Pro Bowl running back did emerge at the time.

An NFL spokesperson did not immediately respond to a request for comment.  The Chiefs face the rival Oakland Raiders on Sunday, but there has been no word yet on whether or not Hunt will be in uniform.

The video footage released on Friday shows Hunt arguing with the woman at 3:22 AM on February 10, 2018 outside Hunt’s hotel apartment at Cleveland’s Metropolitan at the 9.

The altercation begins with Hunt coming out of the hotel room to speak with her. As they get closer, a male who appears to be friends with Hunt tries to separate them before Hunt violently shoves the woman away.

The altercation begins with Hunt coming out of the hotel room to speak with her. As they get closer, a male tries to separate them before Hunt violently shoves the woman away

Several more men and another woman emerge from the hotel room and attempt to hold back Hunt, who re-emerges from the doorway to knock one of the men into the woman, both of whom go falling to the carpeted hallway floor.

Later in the footage, which was originally released by TMZ, Hunt can be seen kicking the woman while she crouched on the floor.

Police body cam footage shows the woman crying as she spoke to police.

‘He shoved me, he pushed me,’ she said. ‘You can watch the video tapes, which I would like to see if that’s possible.

‘Also, I came down after and asked the clerk in the white shirt if I can call 911,’ she continued. ‘I’m not sure if that’s against the law to deny that to a person… I asked him three times, and he said ‘that’s what you get for being a s***.’

‘Meanwhile, Kareem, the person who assaulted me, had my phone. I had no way of calling… I got it back. ‘

At the time, Cleveland police Sgt. Jennifer Ciaccia told Cleveland.com the incident appeared to be a cross complaint, meaning either accuser would be directed to the prosecutor’s office if inclined to press charges.

According to the reports, the woman and a friend – who said they were Kent State students – spent the night visiting bars on a party bus with Hunt, Hunt’s friend and others before going back to Hunt’s apartment.

The dispute occurred after the accuser and her friend were asked to leave the apartment but remained in the hallway outside, making noise and banging on the apartment door, the reports say. 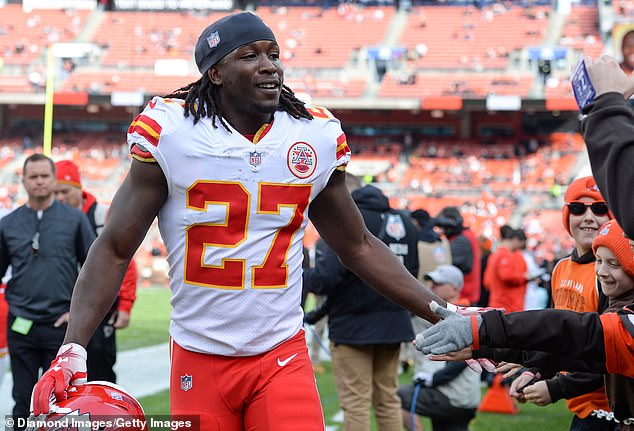 An Ohio native, Kareem Hunt lived in a Cleveland hotel apartment at the time of the incident

The woman told police that Hunt came out of the apartment and ‘shoved and pushed’ her, causing abrasions on her knee and hand and a scratch on her chest, according to the report.

A woman in Hunt’s group of friends told police that the accuser hit her in the face when she went into the hallway with hopes of ending the fracas.

Hunt went to high school in Willoughby, Ohio and played in college at Toledo before being drafted by the Chiefs in the third round of the 2017 draft. He led the NFL with 1,327 rushing yards as a rookie.

The NFL and commissioner Roger Goodell took significant criticism in 2014 for the notorious Ray Rice incident, in which he knocked his then-fiancee unconscious.

Goodell first suspended Rice only two games after video emerged of the former Rutgers star dragging his now-wife out of an elevator at an Atlantic City casino. However, that suspension was extended indefinitely after another video was released depicting Rice striking her in the elevator.

Rice has been out of the NFL ever since.