Footage ‘shows a strange creature swimming in the Thames’

By Sophie Inge For Mailonline

Bizarre footage appears to show a mysterious creature swimming in the Thames.

The video, which was captured on Wednesday from the University of Greenwich, shows ripples in the river followed by what appears to be a finned creature emerging from the murky water.

The man who filmed the phenomenon said: ‘I was at work today, I’m about the eighth floor up when me and my workmate noticed a weird fin-like object coming up and down and making some weird swirls in the water.

Mysterious: The video, which was captured on Wednesday from the University of Greenwich, shows ripples in the river

‘We kept our eyes out for about five minutes and it came up again right by the shore. And then it disappeared again.’

It’s not the first time unusual marine life has been spotted in the river.

Earlier this year, an Olympian claimed to have spotted a ‘lost dolphin’ swimming through the Thames.

Swimmer Andy James whipped out his camera phone when he saw a fin pop out of the water in Richmond, South West London. 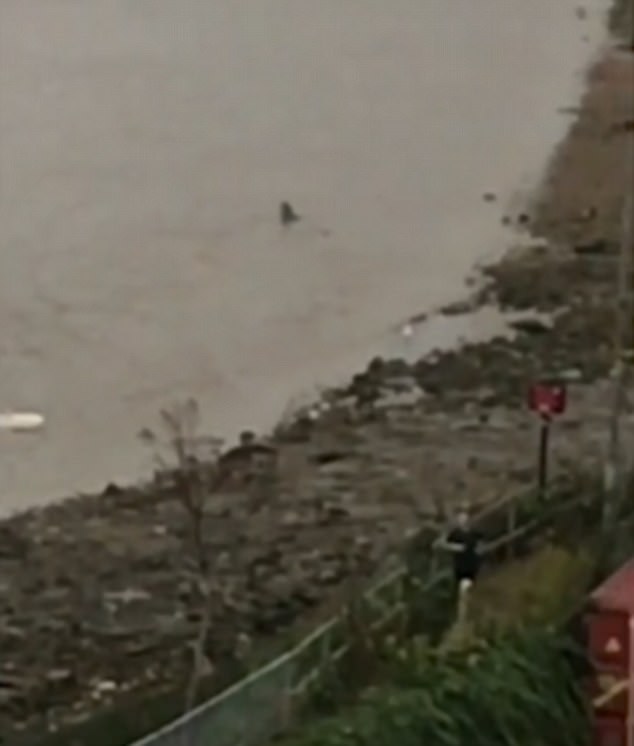 Has Nessy come to London? A finned creature then appears to emerge from the murky water

Posting the short video on Twitter he wrote: ‘Ok… you may all think I’m mad, but I just saw a Dolphin in the river Thames at Richmond.’

The 15-second clip shows a dark fin poking out of the water before diving below the surface.

According to the ZSL Thames Marine Mammal Survey, which has been collecting marine mammals public sighting data since 2004, there have been eight dolphin sightings in the Thames this year along with 25 harbour porpoises, 197 grey seals and 102 harbour seals.