‘TWO HOURS for some chicken nuggets’: Incredible footage shows queue of cars snaking up road outside McDonald’s after 33 drive thrus opened across UK

Huge sprawling queues have been seen this week as people rush to get their McDonalds fix, after the fast food company re-opened a selection of restaurants for drive thru.

After the Government eased lockdown restrictions McDonalds have opted to re-open 33 stores around the country on Wednesday for pick-up meals, while a further six are providing a delivery service.

Staggering footage showed vehicles snaking up and down roads waiting to access the restaurants, with many people having to wait over two hours to get their food.

Videos soon emerged on social media, after members of the public filmed the queues in utter disbelief.

McDonald’s released a statement claiming that branches would shut if the queues were too long, after expecting a big turn out following the eased re-opening. 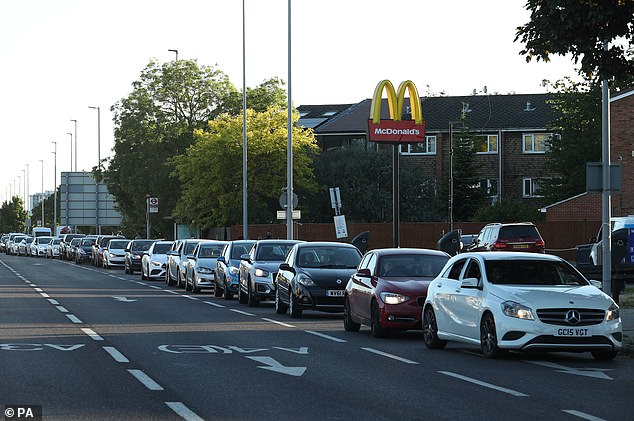 Cars piled up as people became desperate to get their favourite fast food fix. Pictured: a full queue outside the drive-thru in Hounslow

Videos soon emerged on social media, after members of the public filmed the queues in utter disbelief.

McDonald’s released a statement claiming that branches would shut if the queues were too long, after expecting a big turn out following the eased re-opening.

A spokesman told the Sun: ‘We expect a high demand across all locations. We are working closely with local authorities and we may determine it is necessary to close our drive-thru lane if queues can cause disruption or put our employees or customers at risk.’ 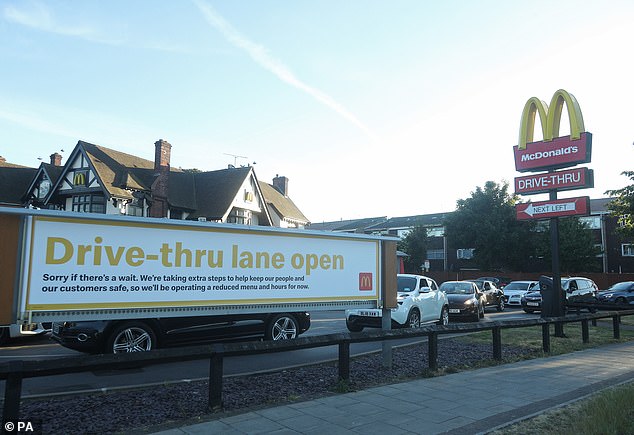 After choosing a selection of the sites to re-open across the country, the majority of restaurants back serving the people are found in the south of England.

The fast-food chain has also reopened six of its restaurants in Dublin as drive-thrus.

Safety measures also had to be put in place at the various re-opened locations, in order to both maintain the practice of social distancing amid the ongoing pandemic and also keep tempers in check during the tiresome queues.

Police were reportedly called to the Boongate store in Peterborough after huge numbers of customers rushed to the shop when it re-opened at 11am on Wednesday morning.

McDonalds have made the call regarding safety for their workers, and have put measures in place to minimise the risk of coronavirus spread. 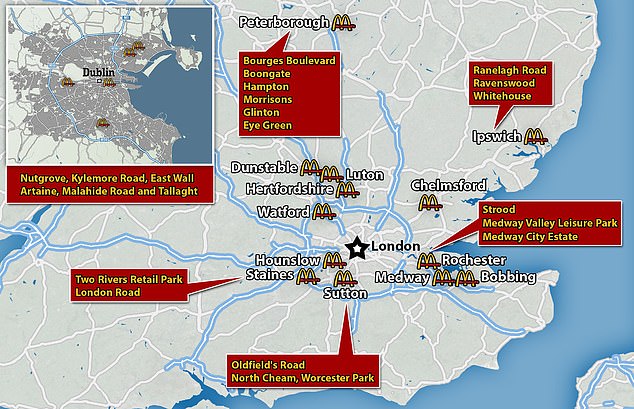 Perspex screens are installed at all drive-through windows and staff will be given protective equipment, the firm have said.

Upon arrival at work, all staff will have their temperatures monitored, while screens will also be present in the kitchen areas.

The fast food giant hopes to reopen all drive-thru operations over the next month, following a complete shutting down period in late March during lockdown.

McDonald’s’s latest round of re-openings comes after 15 of its restaurants in the South East of England were reopened through food couriers Deliveroo, with the fast food outlet offering a limited menu and putting a spending cap at £25 per order.

A statement from McDonald’s said: ‘With restaurant teams adjusting to new procedures to enable safe working and social distancing, things may take a little longer – and high demand is anticipated.

‘McDonald’s and its franchisees are working closely with local authorities and the police, and may determine that it is necessary to close Drive Thru lanes if queues cause disruption at busier sites or put employees or customers at risk.’