A football fan has been flamed for his brand of phone after posting an ingenious way to source a homemade VAR for World Cup games.

During Brazil’s 2-0 win over Serbia, one fan took officiating control into his own hands, constructing a DIY Video Assistant Referee (VAR).

Reposted by ‘Bestoffootball’ on TikTok, the video shows a Qatari man pulling out high grade binoculars.

He then turns on his phone camera, focusing the lens behind the eye-piece of the binoculars, allowing for extra zoom capabilities.

The spectator starts taking pictures behind the zoom of the binoculars, inspecting an offside call in the fixture from the comfort of his seat.

‘Let us introduce to you … The real VAR,’ the caption read.

The original video has received over 24million views with 1million likes, but it was the outrage of comments that sparked conversation.

TikTok viewers were appalled at the choice of phone made by the fan, who supposedly could throw out the binoculars by buying a Samsung S22 Ultra.

The galaxy S22 Ultra boasts telescope-like zoom quality at 100X optical, which is perfect from the far seats of a stadium.

‘I feel so bad for the iPhone users,’ one user commented.

FIFA have employed the VAR technology for a second consecutive World Cup, helping referees make quick decisions on once before controversial offside reviews. 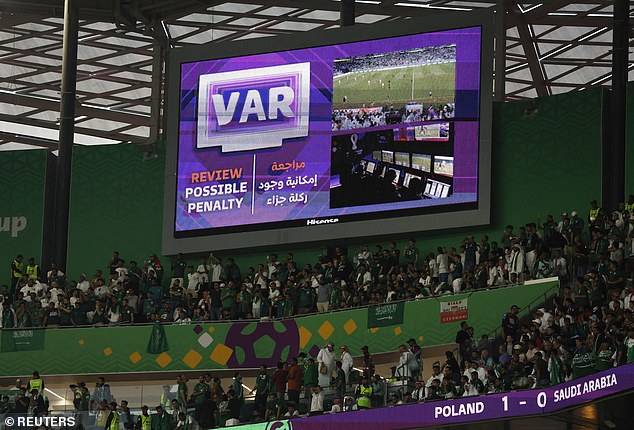 FIFA head of technology Sebastian Runge said data points are translated into animations, which can determine the precise location of players.

Three minutes into the first game of the 2022 Qatar World Cup, Ecuador captain Enner Valencia celebrated after lodging a header into an open net.

However, a few minutes under VAR review, the supposed first goal of the tournament was ruled out due to offside which was hard to see with the naked eye.

Many fans ridiculed the system for picking up on a harsh legality, but diehards respected the call in what was the correct verdict.

This image is in the article, but pulling it out onto Twitter.

It’s not a “toenail” offside decision for the VAR. Ecuador’s Michael Estrada is clearly offside when the ball is headed by Felix Torres.

It’s a strength of FIFA’s 3D animation – but needs to be shown quicker. pic.twitter.com/FWSmflsEQA

Post game, the FIFA animation of the offside situation was released, giving fans an insight into the high tech system at play.