Football news: Celtic hero Leigh Griffiths admits he had to hold back tears on return to action

‘I was close to crying, I’m not going to lie’: Celtic hero Leigh Griffiths admits he had to hold back tears after netting superb 30-yard free-kick on his return to action in Champions League

Leigh Griffiths has ranked a superb Celtic comeback strike alongside his heroics against England and admitted he had to fight back tears when it hit the net.

The 28-year-old striker swept home an outstanding free-kick just before the break in a 5-0 Champions League qualifier first-leg win for Neil Lennon’s men against Nomme Kalju of Estonia.

It was Griffiths’ first goal in eight months and came on his first competitive start after taking an extended break from football last December to deal with depression. 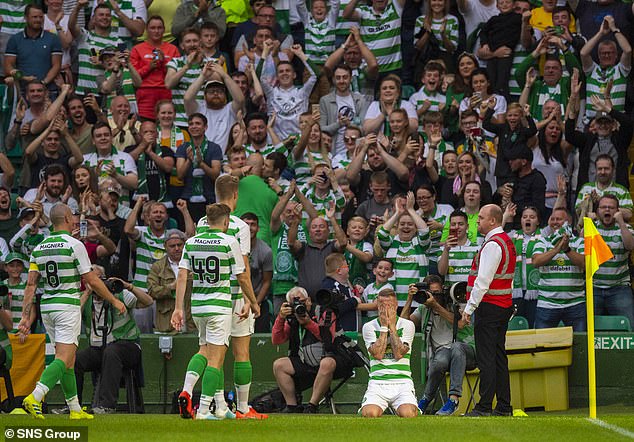 After netting, Griffiths fell to his knees as he struggled to hold back the tears in front of fans

The outpouring of relief and joy was obvious in the Scotland international’s celebration, later confessing the feeling was similar to his amazing set-piece double against England at Hampden in June 2017.

‘I think my last goal for Celtic was a free-kick away to Hamilton and it was nice to get another one,’ he said. ‘I would have taken a one-yard tap-in.. I was delighted to get back on the scoresheet.

‘My kids were watching back home and I had friends in the stand. I was close to crying, I’m not going to lie. But I just had to refocus, see the half out and make sure we didn’t do anything stupid. 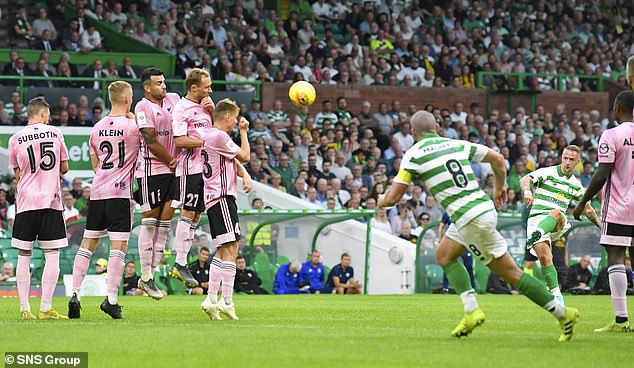 ‘It was up there with the England moments. Right at the very top.

‘I tried a free-kick earlier that didn’t quite come off. I think big Jozo (Simunovic) said before I took that, if this gets over the wall it goes in.

‘As I celebrated, he said: ‘I told you so’. I have to say a big thank you to my team-mates because without them, the manager, the coaching staff and everyone connected with the club, I wouldn’t be back out on the pitch.’

A Ryan Christie double and goals from Kris Ajer and Callum McGregor left next week’s second leg in Tallinn looking a formality, but the night belonged to Griffiths.

‘I think you could tell how much I enjoyed it by my reaction,’ he said. ‘Words can’t actually describe how good a feeling it was when the ball hit the back of the net.

‘A lot of things went through my mind. So much hard work has been put in, not just by me but the backroom staff and everyone connected with myself. 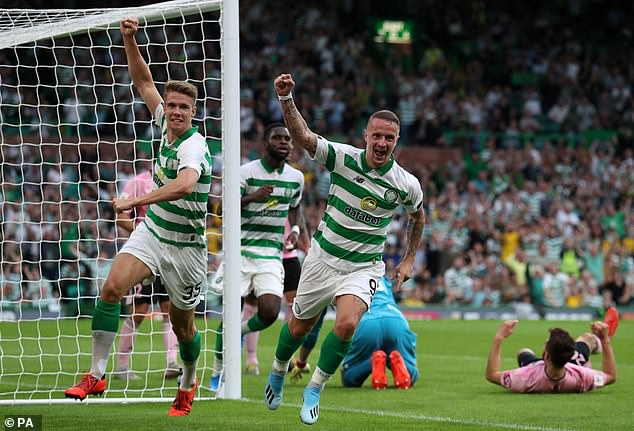 ‘People have worked so hard with me to get me back on the pitch and I can’t score goals without my team-mates. That was a bit of payback for all that and it’s just the start. That’s me up and running for the season and, hopefully, there is a lot more to come.’ Manager Lennon was thrilled for Griffiths and believes he will take a great deal from the experience.

‘He does what he does best,’ said the Parkhead boss. ‘There is always that air of anticipation when he lines up a free-kick because he’s got that range.

‘The reception he’s got from the players and supporters since he came back, it makes me very happy and very proud.

‘He’s still got a bit of work to do in his conditioning. But that will do his confidence the world of good. You could see what it meant to him.’

Meanwhile, Hatem Abd Elhamed has spoken of his pride at joining Celtic after officially signing a four-year contract. The 28-year-old Israeli defender – who can play at right-back or centre-half – was paraded at half-time after a £1.6million deal was struck with Hapoel Be’er Sheva. 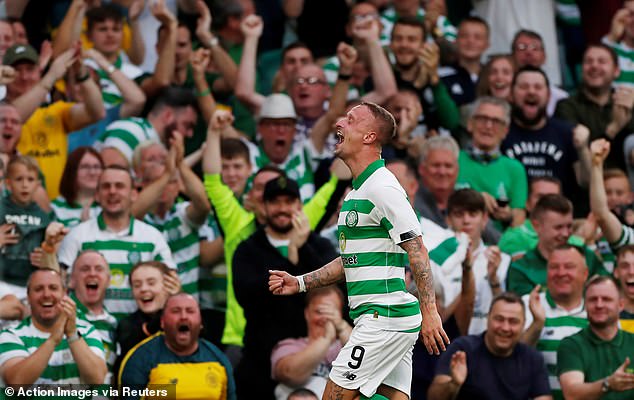 ‘It is an absolute honour to sign for this great club, one of the world’s truly great football clubs and I could not be happier,’ said Elhamed.

Lennon is still seeking another right-back, following the exit of stalwart Mikael Lustig but is confident Elhamed can play a significant role within his plans.

‘We are really pleased to bring Hatem to Celtic, another player we think can make an important contribution to the club,’ he said.

‘He is strong and quick and I have been impressed with what I have seen of him. We look forward to welcoming him to Celtic and joining up with the squad.’